Posted by Michael Parsons on October 23, 2015 in Movie Reviews / 1 Comment

If you fall in the demographic of folks who somehow didn’t get enough cannibalism out of Eli Roth’s “The Green Inferno” but also can’t wait until Tarantino’s upcoming “The Hateful Eight” to see Kurt Russell in a Western again, then rejoice! Writer/director S. Craig Zahler just might have the answer to your prayers.

I just read an article in the Hollywood Journal by Dallas Sonnier, who co-produced with Caliber Media partner Jack Heller, that lends a rather staggering perspective to the unlikely development — nay, existence — of Zahler’s debut film “Bone Tomahawk”, a shudder-inducing Wild West oddity that shows little compromise in the filmmaker’s nasty genre-blending vision. 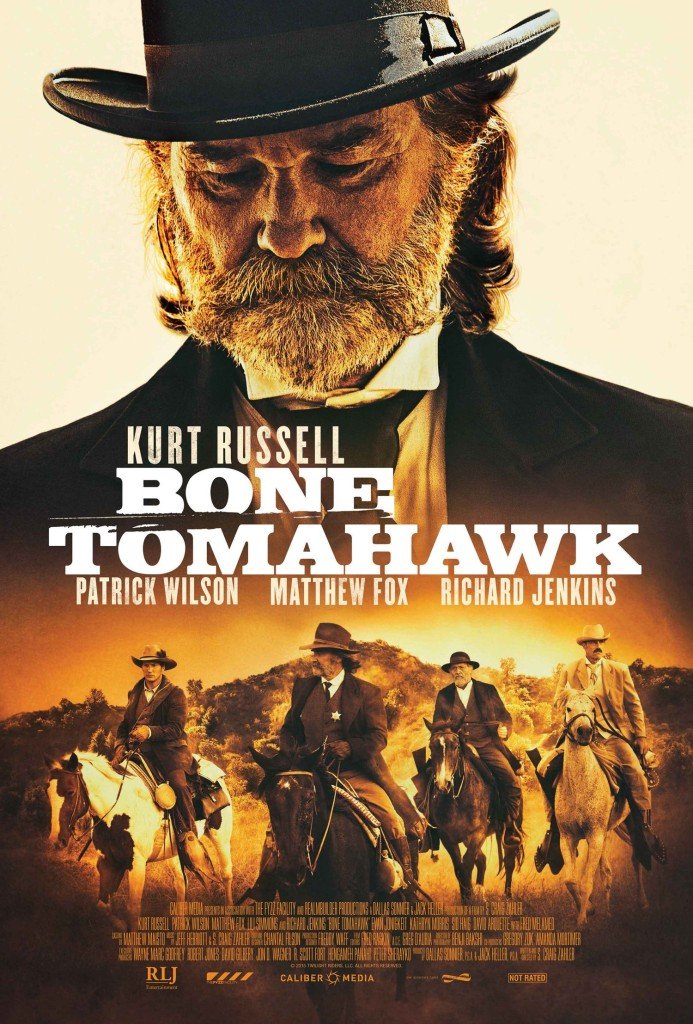 The film stars Russell as Franklin Hunt, the sheriff of a nondescript little town who leads a rescue party after cannibalistic cave-dwellers snatch up a few of his residents for a midnight snack. The primitive antagonists are kept scarce until the film’s final act, when Zahler’s heady, quip-filled Western veers into hardcore horror territory, featuring a sequence that’s in direct competition with “Inferno” for most gruesome human butchering of the decade.

But unlike, say, 1996’s Rodriguez/Tarantino collaboration “From Dusk Til Dawn”, which does a midstream genre 180° without so much as a warning, “Bone Tomahawk” opens with a hint of the nightmare that awaits.

When a pair of thieves are attacked in the desert while pillaging a campsite, the surviving bandit (David Arquette) seeks safety in Hunt’s relatively peaceful farm town, but ends up behind bars after his suspicious and drunken ramblings earn him a bullet in the leg.

That night, the prisoner goes missing, along with the town doctor (Lili Simmons) and deputy (Evan Jonigkeit), while a stable boy (Jamie Hector) is found gutted in the barn. If only the townsfolk had known that an ancient tribe of man-eating troglodytes had a bone to pick with their guest, they might have skewered him themselves and offered him up with a sprig of mint.

Figuring the aboriginal community will automatically be blamed for the incident, a Native American local (Zahn McClarnon) informs them of this dangerous clan of primeval predators that inhabit the hills some distance away, a breed of savages not to be confused with his kin by the prejudiced, less-discerning white population. Ford and his aging backup-deputy Chicory (Richard Jenkins) are joined by gunslinger-for-hire Brooder (Matthew Fox) and the temporarily disabled husband of the missing doctor, cowboy Arthur O’Dwyer (Patrick Wilson), on a five-day horseback ride across the desert in hopes of locating the captives before they get devoured.

The four principal players in the film are a complex, fascinating, often challenging lot, ranging from steadfastly loyal to vengeful to morally ambiguous. Russell slips back into the lawman role so easily it’s like he’s picking up as an age-progressed version of his Wyatt Earp from “Tombstone”, right down to ailing wife (played briefly by Kathryn Morris). Fox, a pragmatic, enigmatic hitman of sorts, would be Russell’s Doc Holliday, though the impeccably dressed, ice-cold gunslinger believes that anyone non-caucasian deserves the business end of his Colt. Fox’s polar opposite, the backup deputy, is played genuinely sweet by Jenkins, an older gentleman with a lot of humor and wisdom to share as they trot to their possible doom. But it’s Wilson’s cowboy that we’re really rooting for, as he navigates the terrain against all odds on one good leg to save his wife from unspeakable horrors.

I marveled at the sheer audacity of “Bone Tomahawk”, not only because of its extremely gory final minutes, but because of the filmmaker’s unwavering commitment to the risky transition. Without the horror element, Zahler’s script would’ve made for a pretty engrossing slow-burn Western, a strangely charming, dialogue-heavy epic that takes its time with scenery (DP Benji Bakshi does wonders with the limited budget) and its rich character development. So it’s all the more shocking when the movie really bares its teeth, a relentless demonstration of practical filmmaking at its most nauseatingly effective, as we enter the lair of some pretty terrifying sub-human creatures where Zahler gives new meaning to “Spaghetti Western”.