Gyllenhaal plays undefeated light heavyweight champ Billy Hope, a Hell’s Kitchen orphanage raised success story happily married to childhood soul mate Maureen (Rachel McAdams) and a devoted father to their daughter, the precocious Leila (Laurence). Leila, like Maureen, knows what’s best for dad. Billy has taken more hits than Maureen cares to count, and she wants him to hang it up for a while and enjoy life outside the ring before he gets too punch drunk. 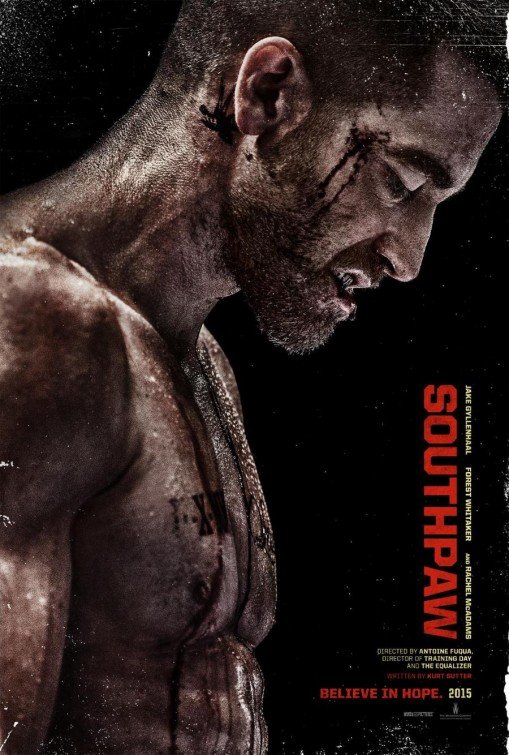 When a developing rivalry with cocky contender Miguel Escobar (Miguel Gomez) leads to tragedy at a charity event, Billy is beset with rage and succumbs to self-destructive behavior that results in financial ruin and Leila being remanded to social services.

In what is arguably Gyllenhaal’s most challenging role, both physically and psychologically, the “Nightcrawler” star, perpetually bloodied here, gives us someone to root for, hurt with, and even marvel at. Turning to trainer Tick Wills (Forest Whitaker) to get him back on his feet, Billy struggles to satisfy the court in order to gain back custody of his little girl. His grief is practically tactile as he tries to piece his life back together, channeling at times the best of Brando and De Niro, but better. (There are a few moments between Gyllenhaal and newcomer Laurence in which it was tough for me to keep my composure).

Structurally, there isn’t much about “Southpaw” that breaks the mold of the genre. But what it does do extremely well, like Gavin O’Connor’s “Warrior”, is explore emotional trauma to the very brink of its actors’ capabilities, and Gyllenhaal careens through the film like a runaway freight train. The brakes get applied only after he meets Whitaker’s disciplined Wills, who runs a boxing gym for underprivileged kids and agrees to help Billy get his life back. Cue the kick-ass training montages.

Supporting cast includes Curtis “50 Cent” Jackson as Billy’s agent and Naomie Harris as the social worker who, more than once, has to inform a brokenhearted Billy that his daughter, embittered by a situation that she doesn’t fully understand, doesn’t want to see him on visitation day. McAdams, firmly in mid-season of the dark HBO drama “True Detective”, gives a nicely balanced turn as Billy’s wife, the rock without whom the champ is completely lost.

Fuqua’s films have recently been hit (last year’s “The Equalizer”) or miss (2013’s “Olympus Has Fallen”), but given a good script and a committed cast such as this one, he can occasionally craft a very powerful drama that, in this case, transcends its conventions. With the exception of a rather bothersome loose end, “Southpaw” gives us exactly what we want in this type of movie.  If you stay away from the trailer, as I did, you might even be in for a few surprises.