Try to picture a Cirque du Soleil show if everyone were trying to kill one another with spears and chainsaws, and that might somewhat prepare you for the insanity that is George Miller’s “Mad Max: Fury Road”, the long awaited fourth installment in the series that put Mel Gibson on the map in the early ’80s.

While 1981’s “The Road Warrior” might remain Miller’s masterpiece, the level to which he elevates the carnage for this new, Tom Hardy-starring incarnation of the post-apocalyptic action/adventure series is consistently, mercilessly jaw-dropping. If the flick never really addresses whether it’s a reboot, re-imagining or  a sequel, only alluding to the death of his family via hallucination, the remorse of a tragic past is felt in Hardy’s stoic, almost gentle presence. 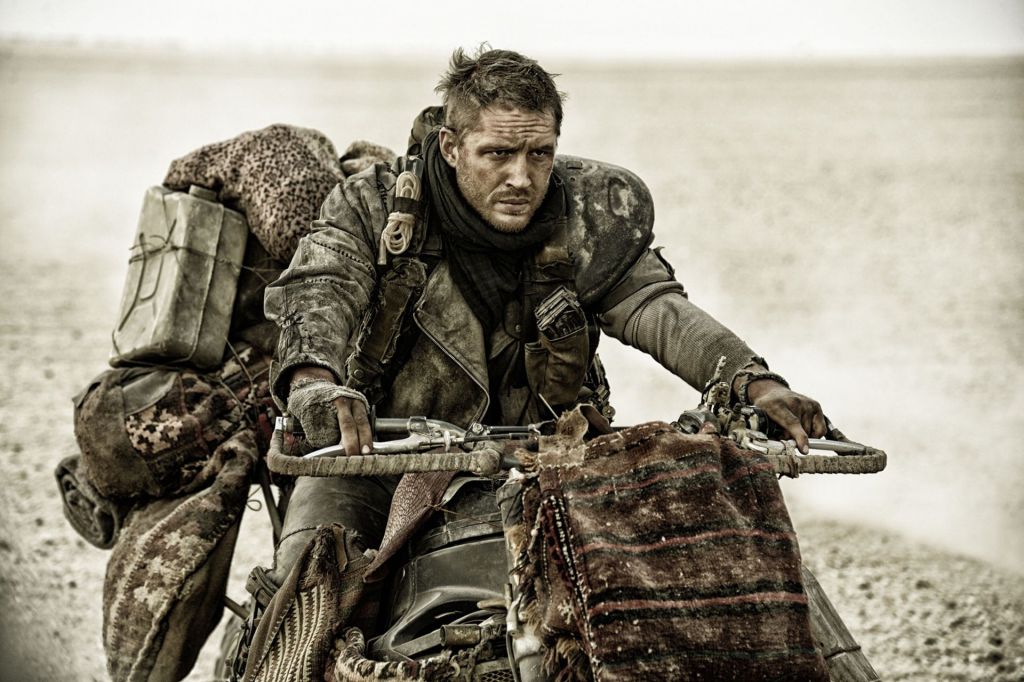 The character’s environment, a vivid topography of seemingly endless desert where warring factions fight for water and other dwindling natural resources, seems like the only place large enough to accommodate Miller’s broad and thoroughly warped imagination. Visually, “Fury Road” resembles an amalgam of Terry Gilliam and Zack Snyder’s twisted sensibilities, thrilling to look at from beginning to end, though there are moments when Miller and his co-writers Brendan McCarthy and Nick Lathouris threaten to drive the whole thing off into total obscurity.

But the film’s over-baked moments are hardly worth mentioning when you’re being treated to what is essentially a two-hour car chase headed straight to the gates of Valhalla (at least, that’s where the bad guy’s minions, who all look like Powder’s evil cousins, seem to think they’re going to end up). “Fury Road” is a triple threat of incredibly complex choreography, eye-popping cinematography, and a symphonic, bone-rattling score that never lets up.

As Hardy’s guttural narration tells us before the opening credits, everyone’s gone nuts in the future, and the film doesn’t waste any time showing us, as Max is captured and, with nutrition in short supply, found useful as a universal blood donor. The villain’s mountain lair makes Thunderdome look like your grandma’s Tuesday evening book club; Hugh Keays-Byrne, who played the bad guy in 1979’s “Mad Max”, returns to don a sinister breathing apparatus for the role of Immortan Joe,  the pasty, tyrannical monstrosity in pursuit of an escaped Max and new friends Furiosa (Charlize Theron) and one of Joe’s rejects, an on-again/off-again passenger played by Nicholas Hoult, whose slender frame takes relentless abuse throughout the film as he decides which team he’s playing for. 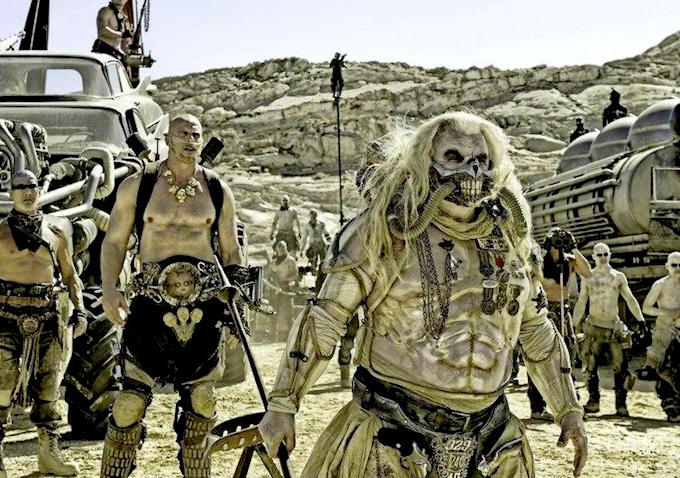 Furiosa, a tough cookie with a shorned head and mechanical arm, has made off with Joe’s harem of pregnant wives (among them Zoë Kravitz and Rosie Huntington-Whiteley) in order to get them to the last lush corner of the world called The Green Place, where we can only assume that better things await. This jaunt into the sandy abyss takes Max and company through a gauntlet of attackers, some bringing to mind the Sand People of “Star Wars” (as does the terrain of their native Tatooine) if they had motorcycles and guns, but most of the characters look like a military experiment gone terribly awry. Each of them has an appearance that reflects the brutality of their world. And they’re armed with every conceivable contraption that one could devise to cripple a tanker like the one Furiosa is trying to haul cross-country.

Less an action film than a roving carnival of intense violence and stunt work that nearly crosses over into rock opera territory, “Mad Max: Fury Road” is a visual stunner, beautiful in that George Miller kind of way, at once hypnotic and bludgeoning to the senses, while possibly setting a new marker for the use of practical effects in cinema. As in-your-face as the movie tends to be, though, there’s a subtlety to it all that cleverly and creatively tells us more about the characters than we realize we’ve learned until most of the dust has settled. Hardy is the ideal replacement for Gibson, and he’s met his match with Theron, who makes the tormented Furiosa tough yet sympathetic. Hoult’s transformation into a sort of crackhead Theon Greyjoy is entertaining and disturbing. More sequels, please.