“I just want to make sure you’re the kind of crazy I can live with,” says Evan (Lou Taylor Pucci) to the lovely and mysterious Louise (Nadia Hilker), a brunette beauty with some big-time baggage. Boy, is he in for a surprise!

You might remember Pucci playing the obnoxious dolt who unleashed ancient demons in 2013’s “Evil Dead” reboot; here, he’s a rather likable young man who just happens to fall head-over-heels for a genetic anomaly/succubus/supermodel during a journey of self-discovery in Italy.

“Spring”, which comes from “Resolution” directors Justin Benson and Aaron Moorhead, is impossible not to compare to Richard Linklater’s “Before” film series, as many have done since its premiere at last year’s Toronto Film Festival. It is perhaps the most passive horror movie of recent memory, first and foremost a love story, not unlike Xan Cassavetes’ retro-chic vampire flick “Kiss of 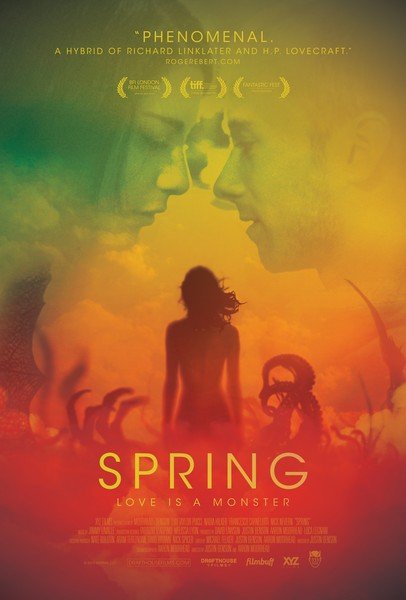 the Damned” with shades of Jonathan Glazer’s visually stunning “Under the Skin”. The film is so intriguing, strange, sweet and charming that one might wonder if this filmmaking duo were actually responsible for a headache-inducing segment in this year’s found-footage horror anthology sequel “V/H/S: Viral” that they’re credited for making.

But I digress. Enter Evan, a twenty-something bartender who, in the wake of losing his mother to cancer, begins to take a self-destructive path. After nearly beating a miscreant bar patron to death, he decides to go abroad, where he settles into a little seaside village that looks like something out of myth (to call it simply scenic would be an understatement, and probably an insult to Moorhead, who doubles as the cinematographer).

When Evan strikes up a conversation with the sultry Louise, her immediate interest in bedding him throws up some red flags: “Are you a hooker”? he asks, laughing. “Are you going to rob me or something?” She somewhat playfully spurns him when he insists that he take her out to dinner the following evening instead of indulging in the abrupt proposition for sex. “You’re making things more complicated than they need to be”, she says. Ladies and gentlemen, cinematic history may have been made with this scene, at least as far as the horror genre goes.

Keep in mind, I’m using “horror” as the nearest, most obvious categorization, but if one were to excise about 30 seconds of icky moments, the film could be a romantic drama about soul mates meeting in the midst of a complicated illness. The screenplay from Benson, as well as performances from the two actors, get us fully invested in these characters, who develop a relationship that might be defined as unusual even before we discover that Louise is some variation of Sil from “Species”. It is a more believable and passionate dynamic than any Nicholas Sparks adaptation could ever hope to achieve.

An early bet for my hidden gem of the year, “Spring” is a great indie flick with big aspirations, but one that works wisely within its budget limitations. Impressive mostly in its commitment to fully exploring the extent to which love can transcend all things, while pondering concepts both evolutionary and spiritual, the film is gorgeously shot, relentlessly moody, and most importantly, extraordinarily well-acted. This is ideal for couples of diametrically opposed tastes who are at an impasse for date night movie ideas, a bit like last year’s “Twilight Zone” romance “The One I Love”. Only for this one, for reasons I won’t explain, I’d avoid eating any seafood beforehand.

“Spring” is playing in select cities and available on most VOD platforms.