Posted by Michael Parsons on December 24, 2014 in Movie Reviews / 1 Comment

It would be an understatement to call the life of Louis Zamperini, as assiduously chronicled in Laura Hillenbrand’s absorbing best-seller “Unbroken”, difficult to comprehend.

Emerging from a rough childhood to break all sorts of high school track records, a young Zamperini made his way to the 1936 Olympics in Berlin, where he’d place only eighth but set a long-standing record for fastest final lap by quite a margin. Acutely aware of his more seasoned competition, he was not expecting to win a medal; his sights were set on the 1940 games, which were to take place in Tokyo. 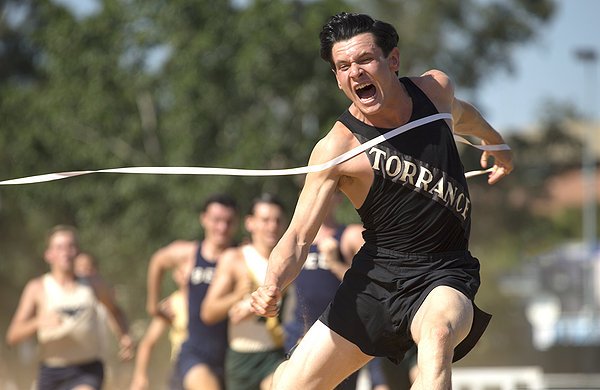 While in Germany, he was greeted by Hitler and almost found himself in a Nazi jail when succumbing to the call of his childhood kleptomania, only to be pardoned by the furor himself. He then went on the set a collegiate mile record at USC. He’d eventually make it to Japan, but not in the way in which he’d been planning.

During the war, Louie would set another record. After surviving the crash of his B24 bomber into the shark-infested Pacific, he and buddy Phil, who was piloting the Green Hornet when it suffered a catastrophic mechanical failure, survived for 47 days on an inflatable raft with virtually no sustenance. This was only prelude to their real nightmare, which would take them to the depths of hell and back: for Zamperini, the next two-plus years would be divided up between four Japanese prison camps.

Adapted by Joel & Ethan Coen with Richard LaGravenese and William Nicholson and directed by Angelina Jolie, “Unbroken” is a film so determined not to upset its audience  that much of it borders on generic. That is to say that it’s far easier to digest than anything about war and torture should be; if the aim is a cringing audience, it will most likely occur during close-calls in air combat.

Jack O’Connell goes his allotted distance as the unlikely track star-turned even less-likely airman, taking on such a dramatic physical transformation for the role that he gives Christian Bale’s emaciated character in “The Machinist” a run for his money. Though his performance is seemingly exhaustive, the script barely scratches the surface of the stubborn, wildly problematic upstart from Torrance, California. And yet the film wants to have big, profound moments that are informed heavily by the details of Zamperini’s life experiences. Instead, they tend to fall flat.

With the exception of O’Connell and an equally lean Domhnall Gleeson as Phil (Finn Wittrock is also briefly compelling as their raft mate, Mac), most of the characters are either wildly inflated or relegated to glorified cameos (Garrett Hedlund and John Magaro are among the latter group, and Jai Courtney somehow belongs in both). There are moments that should be heartbreaking but instead reek of Hollywood melodrama; others resonate, but not to the degree that they should considering the weight of its subject.

In Hillenbrand’s pages, Zamperini channeled years of angst and churning frustrations into a campaign to defeat all odds, which served him well when he landed in the clutches of a ruthless, sadistic animal nicknamed “The Bird” (played in the film by singer-songwriter Miyavi) at a Tokyo-adjacent hellhole called Omori. Neither Zamperini’s resolve nor the insanity of his captor are fully realized here; Miyavi hints at an unstable tyrant, but only momentarily does he suggest the psychopath whose loins were regularly called to attention by inflicting human suffering.

While Jolie’s film is deficient in these categories, “Unbroken” does do a few things exceptionally well. A vivid opening sequence finds bombardier Zamperini and crew, along with a sky full of B24s, releasing bombs on a smudge of an island military base called Nauru. Suddenly amidst a flurry of enemy Zero fighters, the plane gets thoroughly swiss-cheesed before limping its five-hour stretch back to base, where it lands miraculously (it’s on record that there were over 500 bullet holes found in the shell of the Superman after touching down). The sequence is stunning, courtesy of “Skyfall” DP Roger Deakins, who also gives the film an arresting sense of isolation during the months at sea and that of gloomy hopelessness in the vast expanse of the prison camps.

Unfortunately, such talents are lent to a film that ultimately feels like a big-budget Cliff Notes put on-screen. It’s not just that the atrocities within have been diluted to a comfortable PG-13 rating; there are also curious omissions, details that made Louie’s journey not just one of endurance, but also an insane tapestry of impossible coincidences, luck, and spiritual awakening.

Notably absent is the Japanese annihilation of a base in which Louie and his crew barely dodged incineration just prior to their ill-fated flight on the Green Hornet; also missing is the second prison camp (undoubtedly used as part of a composite with Omori to condense the film’s running time), where Louie had an unexpected reunion with a Japanese-American buddy from USC who turned out to be a spy. This nugget could’ve been  pulled from a Ludlum novel. 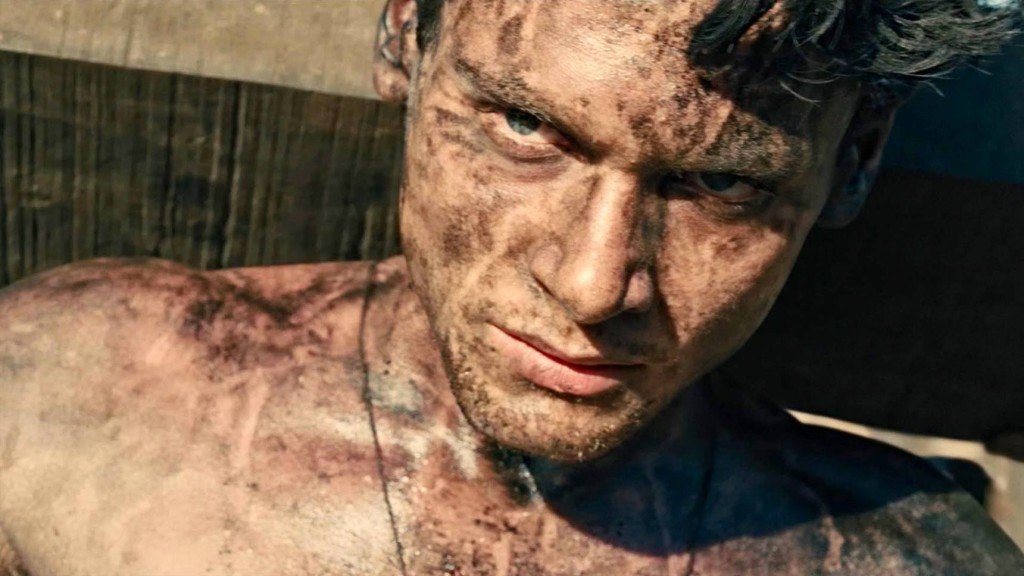 Overlooked also are Louie’s hijinks, including the aforementioned run-in with Hitler, which might have illustrated what a rebel he was, and how his inherent defiance, tempered by responsible older brother Pete (Alex Russell), ultimately contributed to his survival in impossible conditions. But his scrappy disposition is only brushed upon; in flashbacks to his childhood, we might perceive him as no more of a cut-up than Beaver Cleaver, instead of the kid who had to cheat, steal and hide his Italian ethnicity just to survive.

“Unbroken” receives 3 stars because it has its merits, and Jolie, like Hillenbrand, felt compelled to tell an important story that could be appreciated by audiences young and old. If truth were ever more unbelievable than fiction, it’s in Zampereni’s life; the film gets certain things right, both from a technical and emotional standpoint, the latter of which can be attributed to O’Connell’s steadfast commitment to his character. Believe me, he’s going to be an actor to follow. It’s just too bad the script didn’t allow for him to dig a little deeper into Zampereni’s driving force, or for a more harrowing depiction of what he had to overcome. Something tells me O’Connell would have brought it home.