Posted by Michael Parsons on October 16, 2014 in Movie Reviews, New on DVD and Blu-Ray / No Comments

An unsparingly graphic, sporadically concussive experience that around midway through evolves into an intensely sobering drama before thrusting us back onto the front lines, “Fury” not only exceeds what anyone might have expected from director David Ayer after the awful “Sabotage” earlier this year, but should also be regarded alongside films like “The Hurt Locker” and “Saving Private Ryan” as  one of the most memorable war movies of the last two decades.

Ayer also scripted the film (as a writer, he’s best known for 2001’s “Training Day”), which follows Sergeant Don “Wardaddy” Collier (Brad Pitt) and his hardened tank crew on a suicide mission in 1945 Germany where the Nazi opposition consists of greater numbers and superior 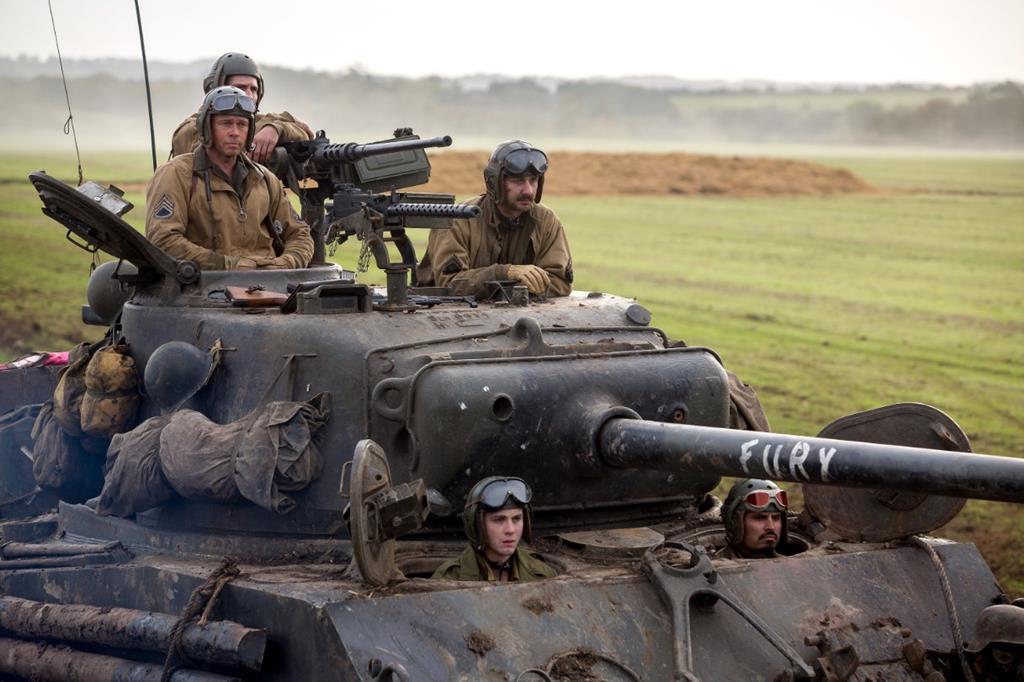 technology. Pitt might appear to be the film’s centerpiece as the calloused, chisel-jawed commander of the titular Sherman tank, but the story really pivots on a wet-behind-the-ears recruit named Norman, played by Logan Lerman (“Percy Jackson”) in a career-making performance.

A portentous opening shot tracks across a field and into a smoldering graveyard where a massive skirmish has just concluded in the massacre of an entire American tank battalion. A lone Nazi soldier approaches quietly on horseback to observe the aftermath; the sequence ends abruptly with Pitt leaping from hiding behind a turret to skewer his enemy through the eyeball with a combat blade. He returns to his tank and crew, where we gaze upon a recently decapitated gunner and battle-shocked, blood-covered Gordo (Michael Peña ) firmly clutching the corpse’s hand while Grady (Jon Bernthal) and “Bible” (Shia LaBeouf) shout at him to let go of their deceased friend.

This won’t be the last time they’ll be the only ones to survive a battle. Making their way to the nearest base, the crew of Fury meet Norman, a teenager who’s arbitrarily been yanked off a transport full of desk jockeys to replace Collier’s gunner. They’re promptly reassigned by a weathered Captain (Jason Isaacs) to assist in the rescue of a group of foot soldiers who are trapped in a hot zone, where they find themselves mowing down a tree line crawling with German soldiers. Norman’s reservations about killing cause issues on the battlefield and a subsequent crash course in Nazi killing from Collier. 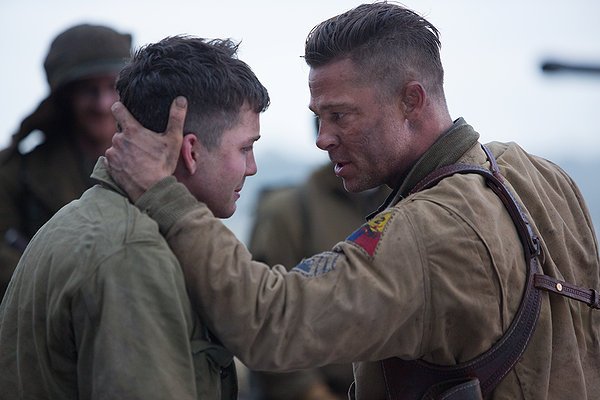 The sheer intensity of “Fury” is something to behold during the combat sequences, as we witness both the destructive power of a tank and the vulnerability of the people inside of it. Ayer has created an incomprehensibly stressful, claustrophobic atmosphere for his audience and cinematographer Roman Vasyanov (of Ayer’s 2012 film “End of Watch”) effectively captures the vast hell on earth that engulfs the soldiers. A breathtaking English countryside doubles as battle-ravaged WWII Germany.

A later run-in with a German Tiger tank leaves Fury’s crew waltzing precariously in the middle of an open field in their unwieldy death machine, frantically trying to outmaneuver the faster, more powerful enemy while exchanging massive rounds of artillery fire like two battleships at sea. As cannons boom and whizzing bullets mercilessly jar our nervous systems by foreshadowing impending destruction, Vasyanov’s aerial perspective gives us a sense of how completely insane a real-life tank battle might have been.

But the film’s most genuinely nerve-racking moment might also be its quietest: an awkward  dinner sequence in a war-torn village where Collier and his men temporarily hang their hats introduces us to a mother and daughter (Anamaria Marinca and Alicia von Rittberg) who’ve clearly been through this before, as the women nervously try to keep the soldiers at bay by offering their limited amenities. Where there might 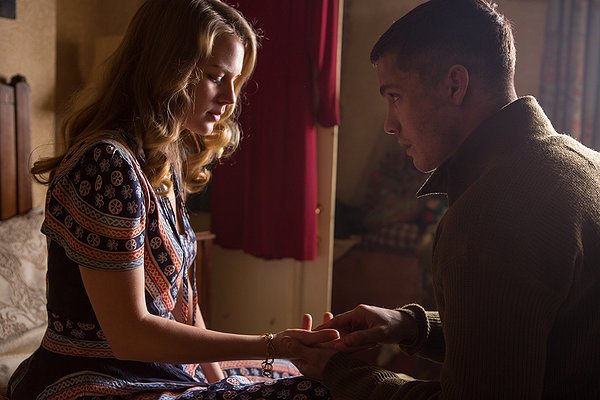 typically be a mid-point lull here, this painfully uncomfortable exchange patiently raises the tension similarly to the opening of Quentin Tarantino’s Pitt-starring WWII movie “Inglorious Basterds”. Only it’s at this critical point in “Fury” where our main characters’ morals — particularly that of Pitt’s Wardaddy — are more clearly delineated.

Marking his foray into all-out war pictures from a comfortable niche of ultra-violent L.A.-centric crime dramas (he also directed “Street Kings” and “Harsh Times”), Ayer’s magnum opus presents its story with a relentless realism that skips most of the stock drama that’s often necessary to keep a narrative moving forward while developing its characters.

But “Fury” isn’t just a lumbering mechanical beast without a soul. Despite having no shortage of blown-off limbs and exploding guts (there’s a scene in which Norman discovers something particularly shocking when scrubbing down the inside of the tank), it also gives us an ounce of humanity. The film never feels strained in its attempt to depict the brutality of war or the staggering effects it can have on a human being, and thanks to great performances all around — including an impressive comeback from LaBeouf  — it does both tremendously well.