The doctors featured in “Code Black” are about as photogenic as the characters in “ER” or any of numerous other emergency room based melodramas. But these guys aren’t acting.

One of them is Ryan McGarry, also the director and co-writer of this documentary (he wrote it with the film’s editor, Joshua Altman). McGarry, who was completing his residency during four years of filming, described the project as experimental. Considering he was already putting in upwards of 80 hours a week in the trauma bay and had never made a movie before, it’s hard to believe such a thing would get completed at all. 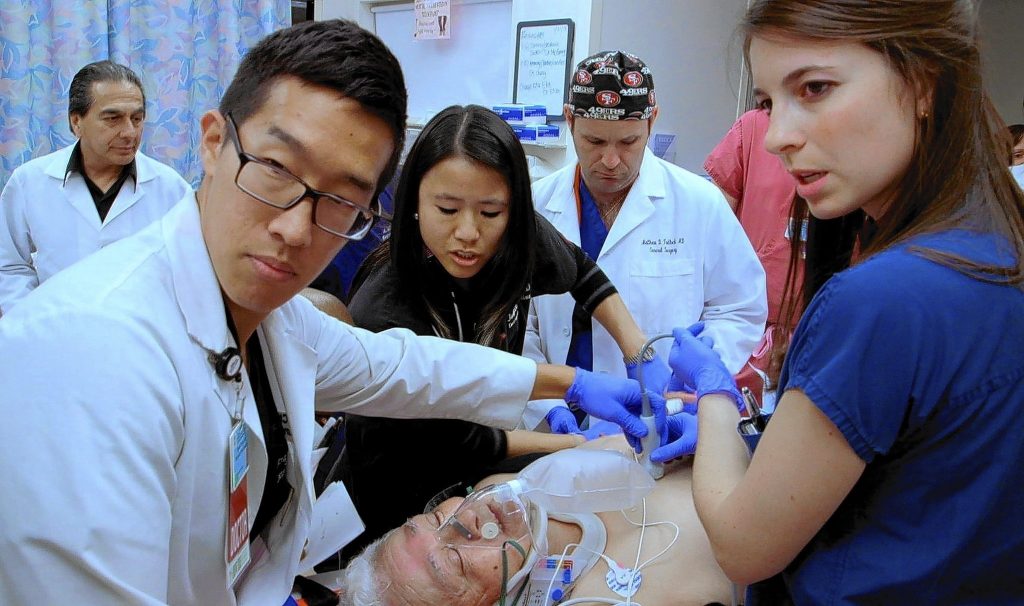 However it snowballed, McGarry has managed to make a full-length medical documentary that is more about the people than the medicine. It is effortlessly emotive and, by way of Altman, feels relatively unsanitized for your average audience. In the opening, the M.D./filmmaker addresses the camera with a matter-of-fact cool that I imagine would be necessary to survive in this line of work, as we watch a multiple-gunshot victim being wheeled into the trauma bay known as C-Booth at L.A. County Hospital: “If you’re an outsider, this looks like total chaos. But as a doctor, I see unity in that chaos”.

Shot between 2008-2012, “Code Black” is a fleeting but sobering glimpse into the busiest ER in the country.  A typical day here might prove unbearably turbulent to most medical practitioners this side of a Combat Support Hospital, and is completely unfathomable for an average Joe like me. Yet the most shocking aspects of the film don’t necessarily roll in on a gurney. In the 80 or so minutes we spend within the sanctum of C-Booth, and later a “new and improved” facility, McGarry, who shot the whole thing on a digital Red Camera, strives to show us a microcosm of a health care system desperately in need of an overhaul, and more importantly their perception of it from the inside, rather than simply shock us into submission with the graphic details of their profession (though the setting does inevitably provide a few  moments that might be difficult for the squeamish).

The term “code black” refers to an emergency room that is at maximum capacity. As the camera pans across a waiting area some 300 people deep, the numbers game that they’re playing becomes staggeringly clear. In one instance, McGarry greets a middle-aged 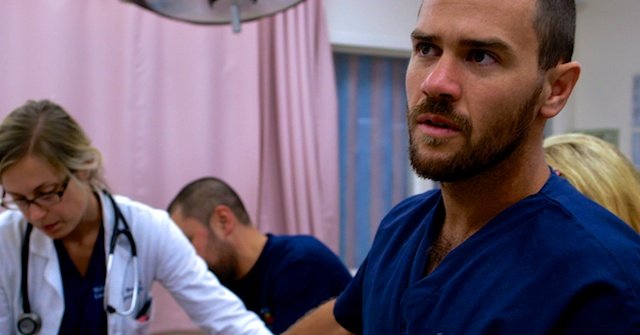 woman who self-medicates with marijuana to treat her sciatica. She’s been waiting for 18 hours, not uncommon for someone who is not in need of immediate treatment. A man comes in who can’t afford to treat his diabetes, and his left foot looks like it needs to be amputated. Both of them are among the many patients whose only access to medical care is through the ER. To paraphrase one doctor, ‘L.A. County+USC Medical Center is a sanctuary for these people’. With one look at the waiting area, it seems like these docs have become general physicians to a quarter of L.A. County.

Part of what makes the film so interesting is that McGarry puts the audience in places we feel like we shouldn’t be. We spend a lot of time shoulder-to-shoulder with the doctors and nurses that make up this impossibly well-oiled machine, and it’s awe-inspiring to see them work. But perhaps most compelling  about “Code Black” are their personal accounts, as they share their motivation to work in such a high pressure, relatively low paying branch of medicine.

Many of the answers stem from a medical history: McGarry beat Stage 4 lymphoma;  junior resident Andrew Eads survived a car crash when he was a kid with only a concussion, but his best friend wasn’t so lucky; senior resident Jamie Eng’s father suffered from Alzheimer’s. Eng says she was tired of looking at statistics — she wanted to start interpreting them in order to help people.

If the original 20 x 25 trauma bay resembled something of a MASH unit, then Billy Mallon, a legendary not-so-by-the-book attending physician (and also one of the executive producers of the film), might have been its Hawkeye. “Emergency medicine is blue-collar work. No pretension, no attitude.” His résumé is astounding. 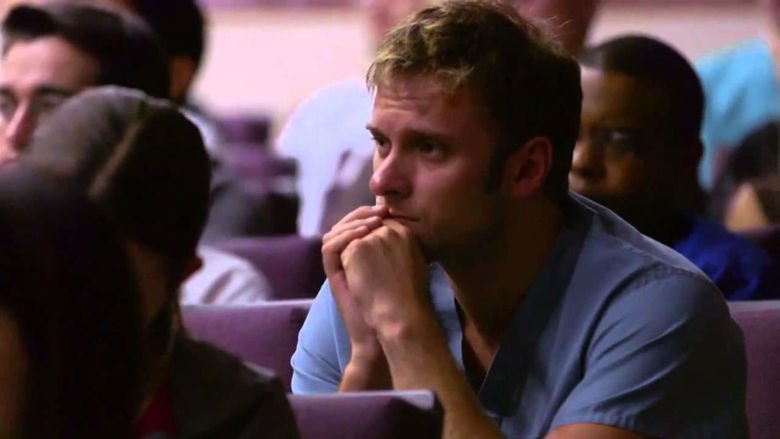 The original hospital was built in 1930, and in 1970, C-Booth emerged as the birthplace of contemporary emergency medicine. In 2008, a new facility was built to comply with updated earthquake codes. While Mallon is the epitome of old school emergency medicine, McGarry’s generation of doctors is that of the new. Like stepping through a time machine, they find themselves dealing with mountains of paperwork and less time face-to-face with their patients. The improved physical space gives the patients more privacy, to be sure; Luis Enriquez, an ER nurse for almost three decades, recounts back in C-Booth having to tell someone a relative had died with a psychotic patient screaming and cursing only a few feet away. But now with 50-60 forms to fill out per registrant, and a larger floor space, it’s tough for them to find the same kind of cohesion they had at the old facility. The list of pros and cons goes on and on.

According to the film, there have been more deaths in that small square footage than anywhere else in the country. There have also been more lives saved there than anywhere else in the country. “Code Black” doesn’t shy away from showing unfortunate outcomes, but it also comes with the attitude and sense of humor that we sometimes see between the colleagues as they vent frustrations at their favorite watering hole. “Code Black” wouldn’t be as effective, or feel as honest, if it didn’t emphasize the harsh realities of emergency medicine, but McGarry, along with editor Altman, has made a film that is far more insightful and inspiring than it is disheartening.