David Ayer may well have cornered the market on films about corrupt law enforcement, but his latest effort, the ultra-violent “Sabotage”, feels more like it was made by a first-time director with something to prove than the seasoned veteran behind such absorbing cop dramas as 2008′s “Street Kings” and 2012′s “End of Watch”.

With very little thematically that we haven’t seen before, a handful of talented actors who never really mesh playing reprehensible characters who are really hard to care about, and an overload of gore that surpasses the last three “Saw” movies combined, this 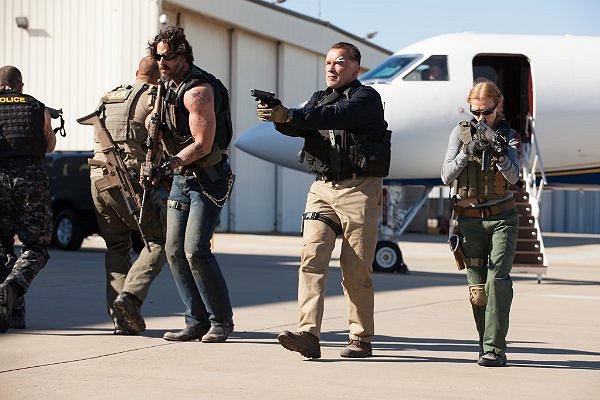 testosterone fueled version of “Ten Little Indians” tries so hard to be down-and-dirty that at times it could almost be mistaken for parody. Co-writers Ayer (“Training Day”) and Skip Woods (“A Good Day to Die Hard”) are far too focused on every bloody detail, in the process losing sight of the bigger picture (or so it would appear), and the resulting story feels awkward, patched together and worst of all, obvious. Had they reined in their over-the-top characters just a little bit and paid more attention to making them half as believable as the violence and blood spatter, “Sabotage” could have been a real stomach-churner instead of just the sour aftertaste we’re left with when the end credits roll.

‘80s action icon Arnold Schwarzenegger plays DEA legend John “Breacher” Wharton, the head of an elite group of agents who make Vic Mackey’s crew from “The Shield” look wet-behind-the-ears. Having recently endured the brutal murder of his family at the hands of a Mexican drug cartel, Wharton has nothing to lose. This might sound like the type of character Schwarzenegger has played countless times before, but “Sabotage” isn’t a “Schwarzenegger” movie, it’s a David Ayer movie, and the role requires a bit more dramatic range than Arnold can muster (his usual stoicism should be interpreted as quiet grief and anger, I guess).

When Wharton and the team, who get high and start bar fights as frequently as they rip off bad guys, attempt to make off with $10 million in cartel money during a raid, their plans are thwarted and the cash mysteriously vanishes. After a six-month suspension, during which an investigation into the team fails to yield enough concrete evidence to prove foul play, the unit is back in action. That is, until they start getting picked off one-by-one, cartel style. 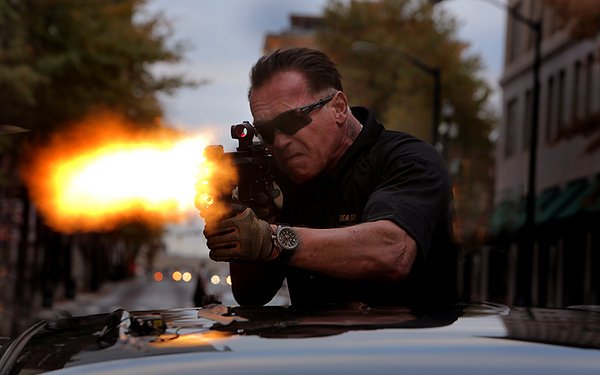 Things get ugly, no one trusts anyone, and so forth. From the first murder, in which a train takes out an RV with one of the team members in it (his remains are strewn about like he’d been shoved into a wood chipper and then shot out of a water cannon) to the “give me a break” reveal that we can all see coming, it becomes increasingly difficult to imagine this group of miscreants ever functioning as a cohesive unit, and it’s almost as if Ayer didn’t know what to do with such a diverse ensemble. Sam Worthington, Joe Manganiello and Mireille Enos all play it to the extreme, particularly Enos as the drug-addled Lizzy, who acts more like she should be in a padded cell than running tactical maneuvers. Terrence Howard is around somewhere, but his talent is wasted on only a handful of lines. It’s up to Olivia Williams as the detective investigating the murders to be the film’s moral anchor, but even she makes some inexplicably stupid decisions.

An exercise in ugliness so excessive that it is more laughable than disturbing, “Sabotage” is the most graphic non-horror film since 2009’s “Law Abiding Citizen”, lacking the emotional realism to put any meaning behind the mayhem. And despite some well-executed shootouts, it’s not even very good as an action film (though the final act does steer into more familiar  Schwarzenegger territory). I’m not sure that “Sabotage” ever had a shot at being a great movie, but at the very least it could have been a solid action/thriller considering the talent involved. Instead, it looks like a cheap attempt to push shock value to the limit while also continuing to re-vitalize Schwarzenegger’s acting career, passing off blood and guts for realism, and depicting cruelty as matter-of-factly as a morning commute. “Sabotage” has its moments, but ultimately, they’re just highlights in an extremely disappointing  movie.