Posted by Michael Parsons on July 18, 2013 in Movie Reviews / No Comments

When “Girl Most Likely” slowly grinds to a halt by the second half, it’s not entirely clear what type of movie co-directors Shari Springer Berman and Robert Pulcini were trying to make. But one thing is for sure –  with Kristen Wiig and a mini-ensemble cast that includes Annette Bening and Matt Dillon at their disposal, it should have been a whole lot better. 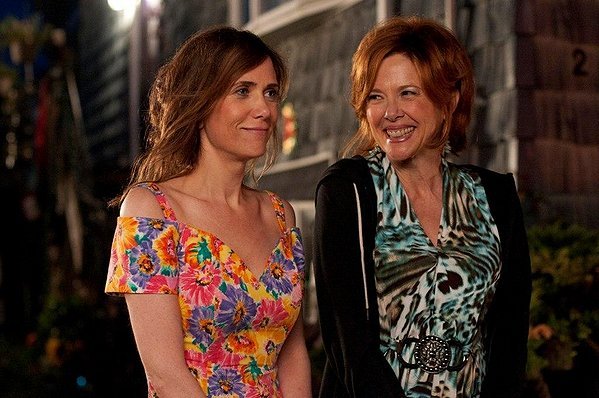 While playing it entirely too safe – or at least appearing to do so – the filmmaking duo, who made 2007’s “The Nanny Diaries” and 2010‘s “The Extra Man,” have missed some fundamental aspects of what makes an engaging story. Whether in a straight-up comedy like Wiig’s “Bridesmaids” or a more dramatic film like Bening’s “The Kids Are All Right” (respective tones between which “Girl” fluctuates frantically), you’ll find a cohesive narrative, well-timed humor and at least some understanding of the characters’ motivations.

Here, it’s all very disjointed; instead of deriving humor from the consequences of people’s desperate actions – a faked suicide attempt, for example (of which people’s concerns dissolve way too quickly even after finding out that it’s really just an act of deception) – “Girl Most Likely” is pieced together with sporadic comic dialogue and tepid drama, all intermingling at the wrong times, each element detracting from the other. It doesn’t take long for the story to fade into a series of tropes that never really mesh with the film’s intermittent levity.

Kristen Wiig plays Imogene, a playwright once on the brink of success who now laments her job as a blurb writer for a magazine in New York City. It’s beneath her talents – that’s apparent, and she gets fired for being too opinionated in her theatre summary column. Her social life is worse; every relationship she has is either dysfunctional or completely toxic, from her uppity Dutch boyfriend to her highfalutin, pseudo-intellectual circle of friends.

Of course, everything else falls apart  – she’s dumped by her pretentious socialite beau and ignored by her closest friend Dara (June Diane Raphael), a condescending shrew. Imogene is portrayed as the perpetual victim; it’s the typical “lose your boyfriend/job/last shred of self-respect in one fell swoop” setup that has driven any number of Katherine Heigl rom/coms, which at first seems like an ideal premise for Wiig to tune up with her sharp, often subtle wit.

Not so much. From there, it’s feigning an overdose to get her exes attention that lands Imogene in the care of her wacky, bohemian mother Zelda (Bening), and under the same New Jersey beach community roof as her socially awkward brother Ralph (Christopher Fitzgerald), a reclusive teddy bear who runs a little crustacean pet shop on the boardwalk. She finds soon-to-be love interest Lee (played by Darren Criss of “Glee”), a singer who is fifteen years her junior, subletting her bedroom – it’s a development that’s as obvious and boring as it is sickly sweet.

Then we get to the real plot. Imogene finds out that her father, who she was told by her mother had died when she was a child, is alive and well living in NYC. Not only that – he’s a successful author. But there’s something so half-hearted about the whole thing that it only makes the film’s unevenness stand out that much more.

It would have been great to see this cast together in a more inspired movie. Matt Dillon shows some of the same comic flare that he did in “There’s Something About Mary” as Zelda’s weirdo boyfriend George Bousche (pronounced Boosh) who claims that he’s deep undercover for the CIA, but with only a few aimless scenes, he’s of little to no relevance until the film’s extremely incongruous conclusion. Bening is only as good as her character calls for – Zelda is a zany, free-spirit with a gambling problem (among other things), but when it comes to depth, there’s just not enough in the script for her to work with.

There are plenty of opportunities for comic brilliance here, but the story is so generic that it’s virtually held together by Wiig’s self-deprecating humor. It’s far from her best stuff, and though amusing – even laugh-out-loud funny at times – there’s not enough material to make a feature-length film interesting. With an exception (and a tear) or two, Berman and Pulcini completely overlook Wiig’s acting range, which is exactly why I thought she was hired for this role (check out “Friends With Kids” to see what I’m talking about). And when the film borders on drama, the more serious aspects are undermined by needless silliness  – the last fifteen minutes resonate like a sub-par Farrelly Brothers movie, and it all ends up feeling like that awkward moment right after someone tells an off-color joke at a cocktail party.

While Wiig is always a sure-fire bet for some laughs, she seems ill-fitted to the indecisive tone of “Girl Most Likely”. Michelle Morgan’s script doesn’t seem designed to be anything more than one of those light, safe, “transformative” stories, where it’s always on the verge of something but never really scratches the surface of anything relevant. It also wallows a bit too much in Imogene’s misfortune and self-pity, and without a more pervasive comic element, it makes you wonder when, if ever, she’s going to have some sort of revelation.