Posted by Michael Parsons on April 4, 2013 in Movie Reviews / No Comments

(Note: This review was originally published on April 4, 2013 at Reel Film News)

The first half hour of “6 Souls” sets us up for what should be a taut, creepy thriller, reminiscent perhaps of such convention-breaking films as “Primal Fear” and “Fallen”, and it certainly pulls from those respective ends of the genre spectrum. But Swedish directors Måns Mårlind and Björn Stein, most recently breaking into the American market with “Underworld: Awakening”, never quite have a grasp on all of these elements as a whole.

A directing style undoubtedly influenced by the ever-oscillating lens of Brian De Palma and the dark, gritty textures of David Fincher gives the opening minutes of the film a fragile and unsettling feel. With its initial observation of multiple personality disorder, along with the skepticism that the illness often draws from even the most apt medical professionals, “Souls” offers a smart, if not slightly familiar premise, and it presents itself as a more intriguing – even inventive – affair than your run-of-the-mill thriller. All seems in place for an arresting psychological ride, until the screenplay takes an early and abrupt turn toward the metaphysical, where “Identity” writer Michael Cooney stuffs his perfectly bankable concept with Satan worshipping, witchcraft and ambiguous purpose. The film then finds itself in purgatory for most of its duration, as the proceedings grow more and more convoluted. 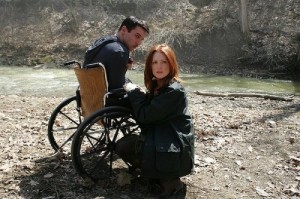 Forensic psychiatrist Cara Harding (Julianne Moore) is coerced by her father (Jeffrey DeMunn) to examine a man that he believes to have a “fractured psyche,” someone that the authorities found unconscious on the street and who has no recollection of how he got there. Her discovery of his two ‘personalities’- one a paralyzed, well-mannered religious country boy named David, and the other a rough-around-the-edges, A-type urbanite named Adam – gets pegged as a conscious attempt to cope with a less-than-ideal childhood, manifesting itself in some very convincing, manipulative behavior. Her steadfast confidence in this type of diagnosis is illustrated in the opening scene when she convinces a panel that a convicted murderer with similar traits was indeed fully aware of his actions, for which he is then unable to plead insanity and is subsequently put to death.

Sparing the few twists that keep the film moderately enjoyable, Cara’s family proves integral to the story. The core of the father/daughter dynamic seems to be based solely on their profession, but manages to stay afloat despite some glaring peculiarities. Dad’s motivation is to challenge Cara’s resistance to the notion of such an illness – open up her mind, as he says – and hers is to question his expertise at almost every turn. Her young daughter Sammy (Brooklynn Proulx) spends much of her time with her uncle, Cara’s good-natured musician brother Stephen (Nate Corddry). And early in the film, we learn that Cara’s husband was murdered a few years back on Christmas Eve, a detail that later ends up crowding the story (so to speak).

You might guess that Cara’s disbelief in such a disorder, which she considers to be a “fad in psychological diagnosis”, will come at a price later, too. And it does. Most of the time, we see such morbid events coming. During her investigation of the mystery man (played by Jonathan Rhys Meyers, who should get credit for an exhausting, stand out performance), who shifts violently between diametrically opposed egos, Cara is given ample evidence that there is definitely more than one person occupying his body. These moments typically seem to be lead-ins to larger revelations, which at first maintain a reasonable level of suspense, only to end up as squandered efforts. 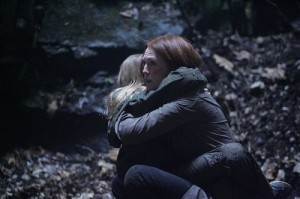 Though we’re initially inclined to think otherwise (and perhaps it would have stayed that way if the surprises were more well-timed), Cara’s theories about the man’s ‘disorder’ are not entirely incorrect. But after linking each personality with the identity of someone who had been brutally murdered, we might expect her skepticism to wane before it does. Instead, the film leapfrogs into the supernatural; the development of the whole thing stems not from mental illness, but from a soul-sucking entity that cycles through its growing collection like a juke box. With such demonic discoveries, it turns into a full-fledged horror film, one that becomes all about testing Cara’s faith.

As the story moves away from an interesting premise, one with loads of potential that anchors itself in a truly uncomfortable spot in our gut (as it alludes to some very scary and real repercussions of trauma), it arcs into territory that has been over-tread by films like “The Possession” and “The Exorcism of (insert little girl’s name here)” without offering much to counteract the boredom. Sure, it has its moments of suspense, but they dissipate quickly. If not for the climax, which is certain to appease some horror fans with its refusal to ‘cop out’, “6 Souls” might just be another supernatural throwaway with a straight-to-video title to match.