Posted by Michael Parsons on March 21, 2013 in Movie Reviews / No Comments

(This review was originally published on March 21, 2013 at Reel Film News)

In my opinion, criticizing a movie just for being clichéd has become something of a copout, even though it’s increasingly difficult to resist doing so, kind of like condemning the plot of an action flick for being implausible. Still, I swore I’d stop, or at least cut back, on using the ‘c’ word. Usually there’s a subtext of some sort that deserves a little more examination when writing a review, otherwise we’re just being lazy, right? And we’re pretentious if we harp too much on realism, aren’t we? Not in this case.

“Olympus Has Fallen”, a production that feels every bit as rushed as the studio must have been with the upcoming more-than-similarly premised Roland Emmerich powerhouse “White House Down” hot on its heels, plays out like a ‘best of’ for disposable action film moments. As ideally escapist as that might sound for action junkies, of which I am one, the film’s general lack of logic, as well as its inexplicable yet predictable ‘twists’ (and worst of all, woefully unexciting action) left me numb from the neck up, which may have benefitted me later on in the film when the dialogue gets really bad.

Here’s the deal: former Secret Service agent Mike Banning (Gerard Butler) has  been relegated to Treasury desk jockey after the First Lady (played in a brief appearance by Ashley Judd) dies in a freak accident, but he jumps steadfastly back into action when the President (Aaron Eckhart) is taken hostage inside the White House (yes, I said inside the White House, but of course you already knew that). This occurs during a lengthy invasion sequence, beginning with a fully armed plane that cruises into Washington, DC airspace, takes out the two fighter jets that attempt to intercept it at the last minute, and then proceeds to unload waves of heavy artillery on –  and I quote from one of several informative news blurbs in the film – ‘the most protected building in the world’, killing countless civilians in the process (in a later scene, it becomes apparent that the attackers understand how to use our White House defense systems better than we do). Witnessing the attack from his office window, which he gazes through with the requisite longing to ‘get back in the game’, Banning sashays through the front door of 1600 Pennsylvania Avenue amidst a sea of flying bullets and dead bodies to save the President and his son Connor (Finley Jacobson).

Unforgivably derivative, mawkishly patriotic and downright ridiculous, “Olympus” has so many familiar Hollywood plot points and thoroughly recycled one-liners that it might be more appropriately described as an action – or even political – parody. No matter how many “Die Hard” comparisons you hear that might make you think otherwise,  those similarities – to the original “Die Hard”, that is – only exist in a very, very rough draft, whenever the concept of ‘guy trapped in a building with terrorists’ made its last annual rotation. This one cheats its way to that tried and true scenario, in which it is entirely unremarkable; it’s missing the heart and relevance that all the flag-waving would suggest it should have. 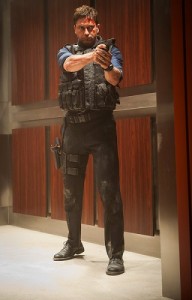 So who’s behind the takeover? A North Korean terrorist named Kang, played by Rick Yune, who lays on the diabolical mastermind shtick so thick that he inadvertently starts channeling his cartoonish Bond villain from “Die Another Day”. But the real problem lies in the script by first-time screenwriters Creighton Rothenberger and Katrin Benedikt; I don’t think many actors could have done much better with Butler’s material, who maintains some semblance of a character you want to root for, only he’s the type that would probably be more interesting to watch winning a bar fight than picking off half-witted paramilitary goons. Two legendary talents, Angela Bassett and Morgan Freeman – whose characters are efficiently introduced with captions as if in an episode of “NCIS” – are all but wasted, and Aaron Eckhart, unlike Harrsion Ford in “Air Force One”, is given nothing to do except yell and watch helplessly while people get beaten and shot.

This doesn’t much resemble the Antione Fuqua who directed such character-driven films as “Training Day” and “Brooklyn’s Finest”, and whose first effort “The Replacement Killers” was a flawed but refreshing action flick. Now, if based solely on this film, he could easily be mistaken for a director like Emmerich, who has essentially cornered the market on contemporary disaster pictures. And since there’s always a winner with these dueling premises (think “Deep Impact” vs. “Armageddon” in 1998), I’m guessing the award will go to “White House Down” in June. After all, the bar has been set pretty low. Let’s hope we get the real Fuqua back on the next one.