Posted by Michael Parsons on March 8, 2013 in Movie Reviews / No Comments

(This review was originally published on March 8, 2013 at Reel Film News)

In the short time I’ve had to ruminate on the pros and cons of “Dead Man Down”, which is the American feature debut of director Niels Arden Oplev (who made the Swedish version of “The Girl With the Dragon Tattoo”), I’ve grown increasingly frustrated with it. Not because it’s a bad film, or because it requires you to overlook the typical plot holes (of which there are surprisingly few for its overworked premise), but because I cannot reveal its biggest flaws without also dropping some major spoilers. Despite its few glaring weaknesses, however, it manages to give us something that feels different, both in tone and plot progression, even when it starts undermining itself to reach an acceptable conclusion.

Before I go on – it’s only been 45 minutes since I left the theater, and the review is due tonight – let me get something out of the way. When you see ‘WWE Studios’ appear in the opening credits, you might feel like you’ve walked into the wrong theater. Sit tight; this film is on an entirely different shelf than “The Marine” and “See No Evil” (and distributed by the blossoming FilmDistrict), and certainly succeeds in telling a story where depth takes  – or at least intends to take – precedence over the violence. Regardless of that, Hollywood is Hollywood, and money is money, and therein lies at least part of the problem. Though it’s hard to fault anyone here for trying to marry genres from different cinematic cultures, which has become more common in the mainstream, this endeavor isn’t always cohesive enough between its ‘meaningful’ moments. Anyway, it definitely feels motivated in some way, shape or form. 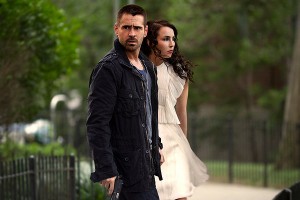 Bookended by two technically impressive and realistic action sequences, which are reminiscent of films like “Running Scared”(2006) and “Collateral”, “Dead Man Down” is a rather engrossing suspense-drama that has (almost) all the elements of the Euro-noir stuff we’d expect from Oplev. But baked from a screenplay by “Fringe” writer J.H. Wyman, who also penned 2001’s “The Mexican”, it ends up catering a bit too much to poorly translated melodrama on one end of the spectrum and straight-up American action on the other. Sometimes it feels like a European auteur with his hands tied by American studio demands, other times it seems like a fledgling American director who doesn’t fully understand how to capture the essence of a heavily nuanced sub-genre.

Colin Farrell plays Victor, a mob enforcer of sorts who’s taken two years to plot his revenge against a crime lord named Alphonse (Terrence Howard, “Red Tails”), with whom he’s recently become employed (in a somewhat ambiguous capacity, but that’s beyond the point). Alphonse is responsible for the murder of Victor’s wife and child; because the job was farmed out to some Albanian hitmen, and Victor – now thoroughly rid of the Hungarian accent that belonged to his actual identity –  is presumed dead, the boss is none the wiser, since they’d never before met face-to-face. It doesn’t hurt that Victor catches a bullet for Alphonse in the opening sequence, solidifying his trust in the relative newcomer, who is quite obviously seething behind his stoic facade. Farrell, who speaks far fewer lines than his typical manic characters (most recently in “Seven Psychopaths”), conveys grief and restrained anger with a rare expressive believability, as he covertly picks off Alphonse’s crew and leaves clues to his identity along the way. 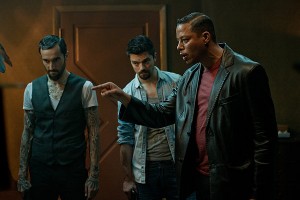 When we’re introduced to Beatrice (the talented Noomi Rapace, also from the original “Dragon Tattoo” and last year’s “Prometheus”) as a mentally and physically scarred neighbor that discovers Victor’s motivation for revenge, “Dead Man” puts an unexpected emphasis on the fragility of its characters, as we might expect from the complexities of people in the real world. During some painful silences, a few that drag on for too long due to the film’s purposeful shortage of dialogue, is where the story justifies the barrage of bullets that is certain to come later. Rapace plays a damaged, unpredictable character so well (and it’s often times so uncomfortable) that we want to be transported back to some mindless action. But of the film’s shortcomings, being mindless is not one of them.

The supporting cast also hold things together, even when logic begins to fade a little. Howard is almost a perfect villain, a mix of sociopath and slick businessman (if there’s a difference) whose cowardice starts to surface toward the end of the film. Though given far more attention than most bad guys these days, he’s still underutilized. Dominic Cooper (“My Week With Marilyn”) plays a squirrelly sidekick type who is desperate to impress the boss by figuring out who’s behind the murders; the kicker there is that his character seems to be Victor’s only real friend.

Don’t mistake “Dead Man Down” for an action flick, though it has both the high and low points of one; the high point being a sequence in which Victor dispatches a few of Alphonse’s crew and then escapes from the fifth floor of an apartment building, the low being a conveniently timed yet unexpected getaway vehicle screeching up to his rescue while the driver shouts “Get in!”