Posted by Michael Parsons on January 4, 2013 in Movie Reviews / No Comments

(This review was originally published on January 4, 2013 at Reel Film News)

If you’re an avid fan of the Rolling Stones and appreciate the typically languid pace of “Sopranos” mastermind David Chase, then parts of this fictionalized flashback to the writer/director’s formative years as part of a New Jersey garage band might interest you. “Not Fade Away” is likely to trigger a little nostalgia, though you’ll need to put up with a whole lot of nothing to enjoy the film’s redeeming aspects, which are so few and far between that its title could refer more to Chase’s overestimation of his audience’s attention span than to the Buddy Holly song. 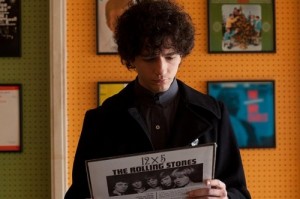 Contrived dialogue headlines this meandering early ’60s piece about Douglas (John Magaro, “Liberal Arts”), an awkward, aspiring young musician who matures through the failure of a band that is obviously going nowhere (even if you’re not privy to Chase’s history or his unequivocal success, this is the sense you’ll get). Jack Huston (HBO’s “Boardwalk Empire”) plays the hotshot frontman whose behavior triggers the requisite drama between Douglas and the rest of the band, which also includes Wells (Will Brill, “Beside Still Waters”) and Joe (newcomer Brahm Vaccarella), as they work a string of small-time gigs with dreams of recording a studio album (one of the more relatable points in the film is a scene in which the harsh reality of the business is laid out for the foursome by an agent played by a perfectly dry Brad Garrett).

Though individually well-acted, there’s never enough cohesion between any of the main characters to convey any real sense of emotional depth – or growth, for that matter – and lacks the substance to distract us from how thin the relationships feel. The result is an aimless, angsty pseudo-drama; ironic, I thought, for such a deeply personal piece, though I suppose it’s possible that Chase’s undoubtedly introspective approach might inadvertently deviate from what we’d consider ‘entertainment’ into something entirely self-gratifying. This leaves the actors with some pretty flaccid material, at least from my perspective; if for no other reason than to fill in the blanks, Chase manages to shoehorn the F-Bomb, the most grammatically versatile word in the English language, into places where even it doesn’t make sense.

That’s not to say that “Not Fade Away” is an entirely awful film, but it certainly isn’t going to be a very engaging two hours for anyone who isn’t excited about listening to music that’s been covered countless times over the last four decades (particularly once you realize that there’s no discernible story arc). This isn’t some original idea about how the ’60s revolutionized music; it’s never moving or even particularly clever. It’s one big lateral move, such as life can be, but the errant storyline goes places that only seem to satisfy Chase’s need to purge his inner musician. If certain mundane events are supposed to be revelatory, they must be straight out of Chase’s diary; I’d more interested in seeing his autobiography than a thinly veiled account of it. 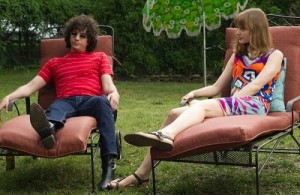 There are a few things that the film gets right, if only to make its other aspects feel more humdrum. Bella Heathcote (“Dark Shadows”) plays Grace, a young woman with an affinity for musicians who becomes Douglas’s disproportionately alluring better half; the Australian actress is one of the few pleasantries here, in addition to James Gandolfini, whose role as Douglas’s hotheaded, less-than supportive father is only less intimidating than his similarly tempered Tony Soprano because he doesn’t own a ‘waste management’ company here.

Perhaps the meaningful notes of the film are hidden too deeply in the details for me to see; perhaps I’m not looking hard enough. While Chase must have experienced some catharsis in recreating a portion of his childhood through this film (a story that apparently he’s been wanting to tell for ages), that doesn’t mean it’s going to be relevant, or even interesting, for everyone. He is so wrapped up in capturing the musical essence of that era that he seems to have forgotten that he was making a movie; just about every song performed in the film by the nameless band is shown from beginning to end, and watching it made me begin to feel like I was being held hostage at a karaoke lounge.