Posted by Michael Parsons on January 18, 2013 in Movie Reviews / No Comments

(This review was originally published on January 18, 2013 at Reel Film News)

If you think it’s tough being a single parent, try doing it after you’ve been dead for over a hundred years.

A CGI rendered, shape-shifting apparition is the matriarchal menace in this nonsensical horror tale about two feral little girls who are brought back to civilization after mysteriously surviving for several years in the woods of southern Virginia. Needless to say, they have trouble adapting to society, due in part to a jealous ghost that is not only responsible for their relative well being, but is also part of their adoption package.

Though beginning with an interesting enough concept, “Mama” turns in to a ridiculous combination of “Darkness Falls” and “Nell”, fumbling with a vague message about parental dysfunction.  The girls, who in the opening scene of the film are saved from their unstable father by the titular spirit, are played like ferocious, rabid badgers by Megan Charpentier and Isabelle Nélisse (honestly, it looked like a hell of a lot of fun for these kids, who get to growl and hide under beds). After they are discovered and brought under the observation of the film’s headshrink stereotype Dr. Dreyfus (Daniel Kash), we must suspend our disbelief to an unreasonable degree as they are put in the custody of their starving artist uncle Lucas (Nikolaj Coster-Waldau, “Headhunters”) and his goth, bass-plucking girlfriend Annabel (an overly inked-to-fit-the-role Jessica Chastain) in a state funded mcmansion. 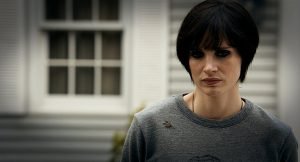 This is all before dealing with the tag-along apparition, which doesn’t like the new mommy and daddy very much. And boy does she show it; flickering lights, blackened walls and a proliferation of sinister-looking butterflies are all tell-tale signs of spectral discontent. This display of overly familiar otherworldly emotions is appropriately reflected by the film’s human characters, whose level of anxiety I might liken to that of a slow loris. Coster-Waldau and Chastain seem to do their best, but only feel like they’re there to fulfill an obligation to the studio. Forgetting about the seasoned actors for a minute, the two talented tots to whom the film predominantly caters might have been better served in some twisted “Home Alone” reboot, if home were a cabin in the woods. But “Cabin in the Woods” this is not; “Mama” is more like one of the genre trends that is ridiculed in that film. 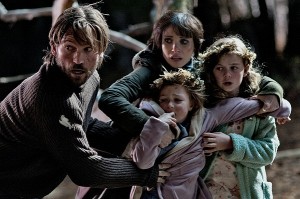 It’s not usually a good sign when a film gets its release date bumped to January, and this is no exception (it was originally scheduled for last October). Unless the name Guillermo del Toro is preceded by the words ‘directed by’ or ‘written by’, then you’re probably in for something less than stellar, like last year’s “Don’t be Afraid of the Dark”, which set the bar pretty low for his status as an executive producer. If director Andres Muschietti just once attempted to scare us with anything other than cheap jolts, I must have missed it; this is the cinematic equivalent of a haunted house at a carnival. And though I wouldn’t advise anyone with a pacemaker to watch it due to its non-stop jumps, the most painful part is seeing Chastain, who I consider to be one of the best actors of her generation, with so little to do.

Yep, almost everything about “Mama” comes up short; the energy, the script, even the FX, which at its most creative gives us an amorphous creature that never makes a whole lot of sense. Perhaps this is appropriate for a film that inexplicably reveals its back story in a series of dreams, as if it had no other way of tying itself together. But it becomes unraveled all the same, and the final revelation is nothing that will make you feel like what you just sat through was worthwhile. While watching Chastain in comparison to her most recent role, I was reminded of how strangely polar 2009 was for Sandra Bullock with “The Blind Side” on one end of the spectrum and “All About Steve” on the other; Chastain must have phoned this one in from the set of “Zero Dark Thirty“, which is also in theaters now. I’d strongly advise you to go see that instead.