John Dies at the End

Posted by Michael Parsons on January 28, 2013 in Movie Reviews / No Comments

(This review was originally published on January 28, 2013 at Reel Film News)

Whether John dies at the end or not is irrelevant, because director Don Coscarelli’s return to his obscure trademark blend of horror/comedy makes his “Phantasm”  ‘quadrilogy’ look as routine as an Amway seminar.

Starting my review while still watching a film isn’t something I would typically do, but since “John Dies at the End” plays like the conscious stream of a madman – and I assure you that it is – it feels only appropriate to act as the translator for folks who might not be familiar with the B-movie auteur’s previous work. This is a film that takes the overused hyperbolic tagline ‘nothing is what it seems’ literally, though it wouldn’t be caught dead using something that cliché. 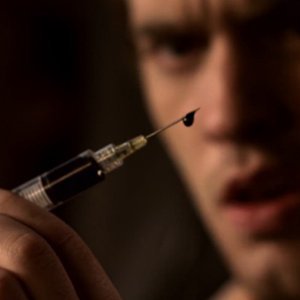 Coscarelli’s version of David Wong’s book of the same name feels like many films; “Big Trouble in Little China”, “Evil Dead 2”, “Phantasm”, “Night of the Creeps”, “The Butterfly Effect” – hell, even “The Sixth Sense” – just to name a few. If that doesn’t sound unusual enough, then here’s a way to gauge your inner freak show: when a dog telepathically conveys wisdom like, “You don’t choose the Soy Sauce, the Soy Sauce chooses you,” and you immediately recognize that the film’s internal logic might be on par with something like “Donnie Darko”, you’re probably going to find some enjoyment in the madness.

Though not nearly as thought-provoking as “Darko”, which took years to gain momentum with an unquestionably open-minded audience, “John” still gives an overhaul to the term ‘non-linear’, and is as resistant to sanity as “Sorority Babes at the Slime Bowl-o-Rama”. The dialogue here seems like an attempt to reach the Joss Whedon crowd if delivered by characters  visiting from the “American Pie” universe; there are almost as many penis references as there are bursting bodies (and lines like “Here’s to all this kisses I’ve snatched, and vice-versa”).

A brief synopsis could help, I suppose. The film opens with Dave (Chase Williamson, “Sparks”) telling his story to a feature journalist (Paul Giamatti, “Win Win”, who is also among several producers), which involves his dimension-hopping escapades with the titular John (Rob Mayes, Lifetime’s “The Client List”) that are set into motion by a mysterious injectable drug called ‘Soy Sauce’. This drug causes a heightened sense of awareness then death – well, something like death, I think. For this dynamically-dysfuntional duo, the ‘sauce’ creates an alternate reality in which the two self-assumed ‘chosen ones’ fluctuate, where hallucination, prognostication and reincarnation all seem to converge (instead of the spontaneous combustion that awaits the rest of the people who use it). Dave and John can see the future, tell you how many coins are in your pocket, and often see ghosts (which tend to have different appearances to each of the guys, because they are technically ‘imagined’) . So it’s really hard for everyone to tell what’s what, especially when it turns out that people can be in more than one place at a time. 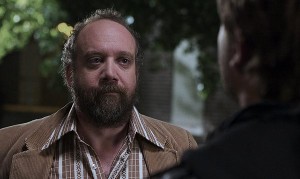 This is the film that will give you a creature made out of freezer meat, a demon-fighting celebrity psychic (played by Clancy Brown, “Cowboys & Aliens”), whose nemesis is the otherworldly being responsible for all the multi-dimensional mayhem, and the meaning of words like ‘beastiology’ and ‘arachnicide’, the latter of which is defined through a gory cartoon sequence which is presented like an educational video on human evolution. There’s even a scene in which a hot dog is utilized in a way that I’ve never seen before (absolutely not what you’re thinking).

“John Dies at the End” gives us a nice injection of nostalgia (including a great cameo by “Phantasm”‘s Angus Scrimm), but it also feels like a creative over-compensation for a genre that has been commercialized into banality. While making Sam Raimi’s “Evil Dead” trilogy look cutting-edge by comparison (this exact film could have been made with ’70s technology), it also cannibalizes itself in the third act with its attempt at a grand finale, expecting us to stick with it no matter what crazy territory it explores. Most of the time the film works, but a lot of the best stuff can easily be missed between its going-for-broke moments.