The Hobbit: An Unexpected Journey

Posted by Michael Parsons on December 14, 2012 in Movie Reviews / No Comments

(This review was originally published on December 14, 2012 at Reel Film News)

I have a confession that might get me ostracized from my group of industry peers: I have not seen any of the “Lord of the Rings” films. One might wonder how that’s possible for a film buff, not to mention a critic; I assure you, I have my reasons. But all blaspheming aside, this undoubtedly gives me a unique perspective on “The Hobbit: An Unexpected Journey”, the first of director Peter Jackson’s three-part prequel to the now decade-old “Rings” trilogy, and the most visually ambitious film I’ve seen this year. 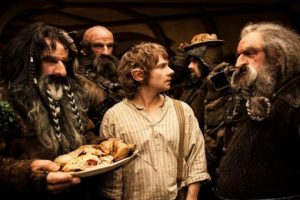 Though I’m new to the fold, this might make me a bigger fan of this new installment than most LOTR zealots; after all, it’s only a prequel in the film world, considering the book was published before ‘Rings’ and then altered slightly to create a cohesion to the latter’s story arc. But to avoid comparison to the Tolkien books, which I’ve not read in nearly thirty years, Jackson’s film is, if nothing else, pure escapism. If it fiddles with side plots and character/creature introduction too meticulously, it does so with eye-popping style; you might even find the images too crisp, as Jackson decided to shoot at 48 frames per second (which, if you’re wondering, gives the film a look similar to the resolution of these newer LED televisions).

Most people who will pay to see “The Hobbit” in theaters (and countless others who won’t bother) are already familiar with basic Middle-earth mythology; dwarves, goblins, trolls and Warrior Elves all populate this beautiful but treacherous world, which in the film resembles the digitally enhanced, mountainous landscape of New Zealand where it was filmed. The story follows Bilbo Baggins, the titular Hobbit played by Martin Freeman (“Shaun of the Dead”) sixty years prior to the adventures of his adoptive heir Frodo (played by Elijah Wood in the LOTR films and briefly at the beginning of this one). Bilbo, like most Hobbits, is not the adventurous sort, content to live peacefully in his hole in the ground, but his solitude is interrupted by an unimpressive wizard named Gandalf (Sir Ian McKellen, “X-Men”) and a small army of dwarves led by the pugilistic Thorin (Richard Armitage, “Captain America”) who are on a quest to reclaim their home – and their gold  – from a fire-breathing dragon called Smaug. We witness Smaug’s destructive wrath on the Lonely Mountain in an early sequence, an impressive display of where the industry is technologically, and a hint of what’s ahead.

The film introduces us to several characters that become critical later in the series, including the cave-dwelling humanoid Gollum, who’s rendered through brilliant ‘motion capture’ by Andy Serkis (“Rise of the Planet of the Apes”), and whose encounter with Bilbo is essentially the springboard for the “Rings” series. It moves into some pretty sinister territory, or at least more sinister than I’d anticipated, where man-eating trolls and an army of unsightly, fanged beasts called ‘orcs’ await to dish out a grisly demise. Several of the battle scenes, with a collective half-dozen creature beheadings, might make you forget that the source material was  written for children.

Returning LOTR writers Fran Walsh, Philippa Boyens and Jackson, as well as Guillermo del Toro (director of “Pan’s Labyrinth” and “Hellboy”), who was originally slated to direct the series, take particular care in giving each character time for thorough development – hence what will end up being roughly a nine-hour adaptation of the book by the time it’s all over. Though it often feels more detailed than a Dungeons & Dragons manual, it establishes a background for the films to come without stretching the narrative into tedium. 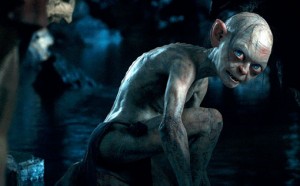 This is due to some fantastic cinematography by Andrew Lesnie and production design by Dan Hennah, whose primarily objective seems to be rendering one massive, sometimes dizzying scene after another. The 3D lends itself to that endeavor; like in “Avatar”, it is immersive, not gimmicky, and after about two hours I found it difficult to discern between certain practical elements and those generated by a computer (some of that, perhaps was from optical fatigue).

Despite all the hype, my interest in Peter Jackson had peaked with an insane little horror picture called “Dead Alive” back in 1992. To me, that epitomized creative filmmaking against all budgetary odds, like Sam Raimi did with the “Evil Dead” series. “The Hobbit”, while not from a genre that I typically gravitate to, is an extension of many of those attributes. It is absurdly entertaining.

I heard some grumbling about the film’s length; at just under three hours (particularly if your eyes are sensitive to 3D), it will likely be one of its biggest criticisms. At some point, it begins to feel like a succession of climax-sized battle scenes, each more intricate and lengthy than the last. And, covering just a fraction of the book, from which the third installment (due out in 2014) derives its sub-title “There and Back Again”, it might have fans of both Tolkien’s and Jackson’s work feeling like they have a long way to go. I won’t profess to understand what will divide hardcore fans, but for me, it sparked a strong curiosity to watch all three of the first films back-to-back.