Posted by Michael Parsons on November 2, 2012 in Movie Reviews / No Comments

(This review was originally published on November 2, 2012 at Reel Film News)

As if addressing Hurricane Sandy, Halloween and the election simultaneously, “The Bay” is a gruesome cautionary tale about our environment that spikes the horror genre with a biting realism, so to speak, in a tightly edited ‘mockumentary’. Centered in Claridge, Maryland, a fictitious town located on the Chesapeake Bay, the film provides its share of startling moments, goosebumps and grisly images throughout the tragic events of July 4th, 2009, the day the town was ravaged by an unknown ecological menace. The story is told through a compilation of footage that was meant to remain secret, but recovered and put together by a college journalist (Kether Donohue, “Pitch Perfect”) who apparently survived the ordeal and intends to release it to the public via the internet. 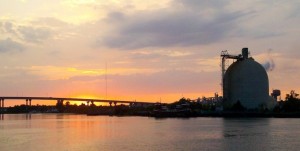 It’s no surprise to see Oren Peli (“Paranormal Activity”) in the production credits, but “The Bay” has much more going on than the typical, less-than-novel first person perspective of the economical ‘found footage’ sub-genre; it is certainly more relevant than any of those films (that I’ve seen). Presented like a professionally edited video chronicle (I know it actually is professionally edited, but looks genuine thanks to Aaron Yanes), clips from iPhones, surveillance cams, Skype and the CDC are what capture the events, keeping it fresh, scary and original. We’re also given the benefit of narration, captions, and are shown text messages and e-mails, giving the film an unusual and eerie sense of connectivity to folks that you know have experienced a horrible fate.

So far out of “Rain Man” territory that you have to give him credit just for venturing there, director Barry Levinson, a Baltimore native who was initially slated to make a legitimate documentary on the plight of the Chesapeake, lands himself somewhere in between “Piranha”, The “Blair Witch Project” and the 11:00 news with this foray into horror. That said, most of the story, written by Michael Wallach, is based on factual data, which is peppered throughout the film; as someone who lives a stone’s throw away from the bay, this is what scared me the most. Roughly 40 % of the bay, they say at the time this was filmed, was made up of dead zones. An early aerial clip showing millions of dead fish floating in the water is extremely distressing. 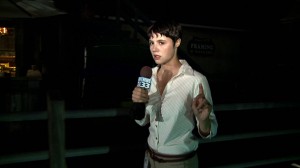 Realism aside, “The Bay” also works as a straight-up monster movie. As the town folk are attacked by the unknown organism (about that, I will only divulge that the films original title was “Isopod”), the science and magnitude of what’s going on becomes more evident. The nature of the film doesn’t allow for traditional character development, but the actors, including Kristen Connolly (“The Cabin in the Woods”) and Stephen Kunken (“The Wolf of Wall Street”) reinforce its believability.

Someone recently told me that any good horror film should be no longer than 80 minutes. With a few exceptions I tend to agree; here Levinson packs a punch in roughly that time frame, minimizing redundancies, and maintaining a sense of emergency and terror. Quite the eco-political statement, “The Bay” might be the most important horror movie you’ll ever see, even if it’s not quite the best.