Posted by Michael Parsons on November 8, 2012 in Movie Reviews / No Comments

(This review was originally published on November 8, 2012 at Reel Film News)

I like this vulnerable, damaged, dysfunctional James Bond. It’s a change in direction that has liberated a 50-year-old film franchise from its archaic, superficial shell and allowed for a flawed, complex character to emerge, in far superior form. Since “Casino Royale”, Daniel Craig has played the role with both a subversive charm and the unpredictable disposition of a wounded pit viper; it’s an attitude that he wears more comfortably than his tuxedo, and so effective in reinventing an icon that it might challenge the devotion of even the most ardent Connery purist. 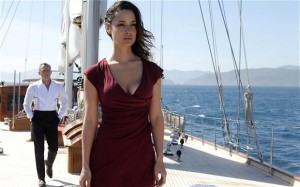 Though “Skyfall”, Craig’s third stint as Ian Fleming’s MI6 super spy, returns the series to some of the more outlandish trademark scenarios that were all but absent from “Casino Royale” and its follow-up, the mildly disappointing “Quantum of Solace”, it also remains as grounded as its two predecessors, sticking to the darker, more realistic side of the spy biz than you might find with invisible Aston Martins and exploding pens. You might say it’s the best of both worlds; director Sam Mendes (“American Beauty”) guides Bond through an unusual, surprisingly emotional story arc, with Craig’s 007 in a state of mental and physical disrepair, and M the target of a disgruntled ex-employee, played with disturbing disdain by Javier Bardem. This is possibly the most intriguing super-villain ever to grace the screen in a Broccoli production. 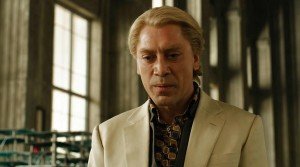 The typical up-to-date threats are in play, and of course the cyber-attack is essential in any worthy security breach these days. But emphasis in the film is on character development, more so than any other Bond film, and the motive of the villain here is straight-up revenge, not unlike Bond’s drive in “Solace”. Of course, as it turns out, the villain is Bond’s contemporary, ex-MI6, a product of M’s academy of soulless assassins whose back story will, for the first time, make you truly question the intentions of the ‘good guys’. Exotic locale, women and gadgets are minimal, though Bond gets a palm-smart Walther PPK (among a few other throwback staple items) from a re-incarnated Q, played by a quick-witted if not smarmy Ben Winshaw, who shared time with Craig in 2004’s “Layer Cake”. Bond also makes the acquaintance of the beautiful Severine (Bérénice Marlohe), with whom he has a fleeting moment, in order to get information. “Skyfall” touches down in Turkey and China, but takes place mainly in on jolly old England, where Silva, Bardem’s brilliant but emotionally scarred antagonist, starts blowing things up. Forget the intricate plans for world domination; his hyper-focused terrorism is far more frightening than grand schemes like trying to steal a satellite or a country’s water supply. All he wants is retribution, even if it takes clearing out an island to set up camp. 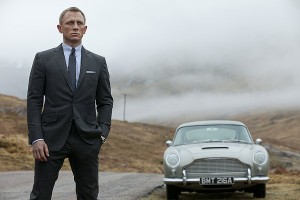 So why is Bond so de-conditioned? When it comes to 007 films, I always look forward to the opening sequence the most. Beginning with the most ambitious pre-credit series of scenes in recent memory, “Skyfall” finds Bond attempting to recover a stolen hard drive which contains the identities of several undercover agents, and after a chase sequence beginning on a motorcycle and ending atop a high-speed train (which he boards by using a front-end loader as a can opener), Bond takes a bullet – actually, a second bullet – falling to a presumed death. Of course, we know he’s not dead; sullen, sunken-eyed and intoxicated after a spell in a third-world country, Bond returns home upon hearing the news that MI6 has been bombed. He’s greeted not with an apology from the ever-stoic M (Judi Dench), but with an order to get evaluated for the field, met with passive resistance by the defense minister, played by Ralph Fiennes. This is Bond’s support group.

There are developments in the film that are integral to the continuing arc of the Bond storyline as it might reflect key characters from some of the older films. Though in execution I still find “Casino Royale” superior, “Skyfall” is a much more complicated feat to pull off; Mendes incorporates action, a smart plot progression, some long-absent humor and a few twists in a Bond entry that will likely appeal to  multiple generations. This still isn’t your daddy’s 007, but there are definitely elements of him there; in “Skyfall”, I think this rebooted Bond has finally found his stride.