Posted by Michael Parsons on October 12, 2012 in Movie Reviews / No Comments

(This review was originally published on October 12, 2012 at Reel Film News)

As the credits rolled on “Seven Psychopaths”, I found myself struggling to remember how the whole thing started in the first place. The film, written and directed by Martin McDonagh (2008’s “In Bruges”), plays like a stream of consciousness; it’s easy to get lost in the insanity. It’s also easy to forget about logic, and that can be a lot of fun. But that only goes so far, and the film wears pretty thin in the final act. 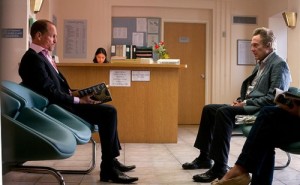 Marty (Colin Farrell) is a creatively incapacitated screenwriter who has a name for his new script, but no plot or characters to speak of. He doesn’t even know what kind of story he wants to write,  just that it’s called ‘Seven Psychopaths’, and he desperately needs inspiration to create some mentally unstable characters. He doesn’t seem to be finding it at the bottom of a bottle; his problems are boilerplate for the young, struggling writer. He seems determined to sabotage his relationship with Kaya (Abbie Cornish).

As it turns out, Marty is surrounded by plenty of lunatics on a daily basis. He gets a lot of unsolicited writing advice from his dog-napping best friend Billy (Sam Rockwell), along with an aging pacifist named Hans (Christopher Walken) who is Billy’s partner in crime. Billy steals the canines, Hans returns them for the reward. Marty has no idea how crazy they really are.

When the two abscond with a Shih Tzu that belongs to a psychotic crime boss (Woody Harrelson), a violent chain of events is set in motion. Meanwhile, Marty puts an ad in the classifieds looking for people – psychopaths that is – who might potentially give him some ideas for his script with their rich backgrounds. One story in particular, involving a married couple who track down and butcher serial killers, is over-the-top gruesome. 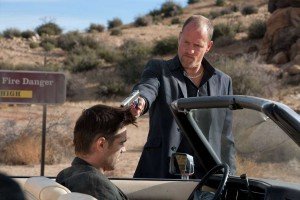 There are considerably more psychopaths in this film than advertised, though the main players are enough to fit the bill. The abundance of characters sometimes stifle their development (though in some cases, this counts as a positive). Extremely violent, the guns, blood and dismemberments are all executed with a sharp and twisted sense of irony. An interesting ensemble of ancillary characters are there to provide the film’s impressive body count (Gabourey Sidibe takes a bullet for losing the boss’s dog) and to amp up the shock and comic value. There’s  a masked gunman at large known as the ‘Jack of Diamonds’ killer who only murders high-profile members of the mob. In the film’s opening scene, he takes out two mob enforcers (Michael Pitt of “Boardwalk Empire” plays on of them) who are gabbing casually about shooting someone through the eyeball.

I really enjoyed “In Bruges”(2008), which also starred Farrell, who played a woeful hitman opposite Brendan Gleeson’s wiser,  jaded gun-for-hire.  The film maintained a great balance between violence, comedy, and character development, and the two had a great ‘odd couple’ dynamic. Amidst the blood and mayhem, they experienced some real human moments. While not subtle by any stretch, McDonagh’s story was engaging, and I felt vested in the characters. Even the antagonist, played by Ralph Fiennes, had his good qualities. 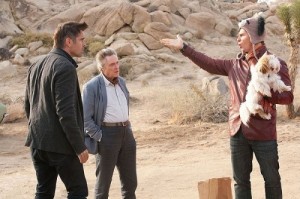 Here, the characters are decidedly less grounded in reality. While Sam Rockwell becomes progressively (and hilariously) more unhinged, Walken remains so brilliantly passive that he’s almost inanimate. Farrell’s unusually subdued demeanor as a functioning alcoholic makes him a fitting mainstay for the film. He never seems to lose his inherent good nature. Harrelson does what Harrelson does really well: mean-spirited, unbalanced, and funny. Everyone, in one way or another, is off their rocker.

Not so much intelligent as it is quick-witted, the majority of “Seven Psychopaths” doesn’t give us much breathing room, then decides to draw itself out for the last half hour (even at a reasonable 109 minutes, it feels overlong). Scattershot and gory, the film incorporates several subplots into the framework of the story, one involving a gun-toting Vietnamese priest, another a vengeful Quaker. Some of these stories overlap the characters’ reality, others are just stories.

A popular critical response to “In Bruges” was its comparison to Quentin Tarantino. I disagree, feeling that McDonagh had carved himself a unique place in pulp cinema in the new millennium. Like Tarantino, however, “Psychopaths” seems to reflect that sophomore urge to outdo himself. If for nothing other than its sheer excess, it’s worth a look.