Posted by Michael Parsons on August 10, 2012 in Movie Reviews / No Comments

(This review was originally published on August 10, 2012 at Reel Film News)

My wife told me she thought “2 Days in New York” felt a lot like a dream. I agreed with her, but I think she meant it as more of a compliment than I did. For me, it felt like running into a verbose neighbor at the grocery store when all I want to do is get the hell out of there.

The film proves more ‘caricature study’ than character study, re-exploring the extreme clash of French and American cultures that director/star/co-writer Julie Delpy left behind in 2007’s “2 Days in Paris”. The driving force behind the story is the continuing neuroses of Marion (played by Delpy) to whom we were introduced in the previous film, and who I suppose serves as a conduit for some of Delpy’s more peculiar tendencies. Chris Rock plays Marion’s live-in boyfriend Mingus, a promising performance (and replacement for Adam Goldberg from the previous film), that is eventually smothered by the idiosyncracies of Marion’s family, who show up at their NYC apartment with the subtlety of a traveling circus. Their pervasive Frenchness lends plenty of clever moments to the film, though it isn’t quite charming enough to compensate for many of the ridiculous scenarios that are foisted upon us; in most instances, annoyance outweighs the comic relief we might hope for from its “Seinfeld”–esque setting.  This is what I imagine it would look like if Woody Allen directed a version of “Meet the Parents” (yes, I’m aware I’m not the first to make a comparison like that), with maybe a dash of Terry Gilliam for its surreal qualities. 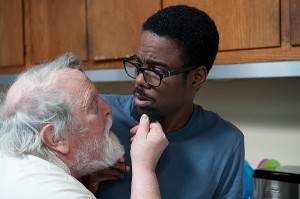 I think the relationships are meant to appear organically haphazard, but almost all of their problems stem from the family’s inability to control their respective ultra-French stereotypes. Marion’s sister Rose(Alexia Landeau, who co-wrote with Delpy) walks around the apartment naked and can’t manage to keep her breasts in her leotard during yoga. Rose’s boyfriend Manu (Alex Nahon, another co-scribe), who happens to be Marion’s ex, seems like he’s only along for the ride to exacerbate the sexual awkwardness of their co-habitation and add some not-so-original ineptitude regarding race (do they not have hip-hop on planet France?). And their father (Albert Delpy, no coincidence on the last name) hobbles around, jabbering playfully like a Jim Henson character with a sunny disposition that quickly shifts into full-tilt crazy.

The pace of “2 Days in New York” feels like someone learning to drive a stick-shift with an extremely neurotic instructor. Marion is a photographer whose career-defining exhibit  seems representative of an impending nervous breakdown. Delpy’s ability to walk the emotion fence is interesting at first, but grows thin as we (or me, at least), decide that we don’t like her character very much. At one point, she tells a neighbor she has terminal cancer to stop their threats to have her evicted, which was a result of her family’s disregard for common courtesy in the first place. Is this to be passed off as French culture? Mingus, who’s a journalist and radio personality, gets swallowed by their imposition, and it’s too bad, because he might have grounded the film a little with his reserved performance.  Instead, he’s relegated to conversing with a cardboard stand-up of Barrack Obama, something that later becomes a platform for some watered-down stand-up (wish I eventually started craving). 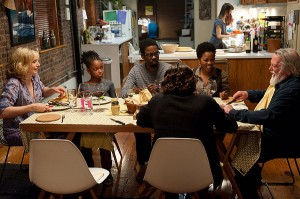 “2 Days in New York” probably has some greater meaning in a personal capacity for Delpy, whose mother Marie Pillet ( who played Marion’s mother in “Paris”) passed away in 2009. But the idiosyncrasies of the character’s seem to transcend any real development. Occasionally, through the haze of improv-style dialogue, it promises to go somewhere. Instead, it detours into several dead-end, often mundane tangents, and though I won’t reveal how it ends, doesn’t go very far. For example, there’s a sub-plot that suggests some sort of existential depth in which Marion ‘sells her soul’ for her photo exhibit. This ends in neither revelation nor punchline, but rather an odd, kind of pointless rendezvous with an eccentric actor (who will remain unnamed here). I can say that by the end, you’ll understand why Marion is the way she is. If that sounds like a good time, then this just might be your bag.