Jeff, Who Lives At Home

Posted by Michael Parsons on March 16, 2012 in Movie Reviews / No Comments

(This review was originally published on March 16, 2012 at Reel Film News)

It’s tough to dislike a film that promotes a genuine faith in humanity, especially as seldom as that type comes around these days. Such is the case with “Jeff, Who Lives at Home”, a breath of fresh air for those embittered souls who’ve grown weary of  the cynical overkill in comedy as of late. 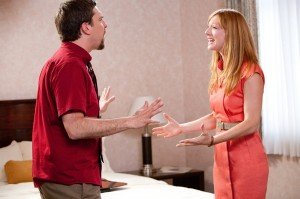 A pleasantly dysfunctional family is the focus in “Jeff”, which is named for the pothead centerpiece of the film played by an appropriately unkempt Jason Segel, and involves his older working-stiff brother Pat (Ed Helms) and their good-natured, modest mother (Susan Sarandon). The film introduces Jeff, a 30-year-old slacker who lives in the mother’s basement, and whose simple belief in cosmic order is summarized in the first scene by his interpretation of the film “Signs”. This is an idea that all things have meaning, and that the signs are always presenting themselves – that is, if you look for them. Meanwhile, we meet Pat, who appears to be the polar opposite of his brother, a man who covets material things as a diversion from his troubled marriage.

After his mother calls asking Jeff to pick up wood glue from the store and fix a cabinet (perhaps the least he could do on her birthday), he receives an erroneous dial requesting a man named ‘Kevin’. Soon thereafter, as Jeff ventures out on the bus to fulfill his only duty for the day, he sees a young man with ‘Kevin’ embroidered on his basketball jersey and decides that this man may somehow be intertwined with his destiny. What Jeff encounters after that – an altercation at a basketball court, followed by a chance encounter with his semi-estranged brother – all lead to some very funny, and very touching, moments. 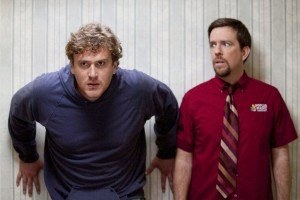 If “Jeff”, the newest entry in the so-called ‘mumblecore’ brand of comedy (identified largely by its heavy improvisation) is not the funniest, it is certainly the most whole-hearted of recent efforts. Writing/directing brothers Mark and Jay Duplass (“Baghead” and 2010’s unlikely charmer “Cyrus”) tie together a story with just enough comedy, realism and emotion to make all three of those elements believable. So often do contemporary comedies operate on a level of disbelief that the potentially effective moments, funny or otherwise, are lost in either manic extremes or the murk of convention. But “Jeff”, though zany at times, is grounded firmly in a sympathetic world. As if dutifully preserving some semblance of normalcy as a meter of temperament in order to make the dialogue-driven comedy more effective, the Duplass’s screenplay relies heavily on its characterizations and plays exactly to the strengths of the cast. 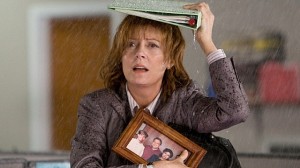 “Jeff” has a few formula traits, but only as many as it needs to, and is certainly more rewarding than most films of its particular sub-genre. In a very real way, it’s compelling to see this lazy man-child inadvertently changing the course of a family in crisis, as he follows his unusual belief system to the letter, and how it speaks to the inherent goodness in people. Where several recent comedies have provided no real purpose, retribution, or resonance (most recently the very overrated “Young Adult”; ironically, its director Jason Reitman is one of five producers on “Jeff”), this film delivers a surprisingly emotional message, attributed simply to a great script and a perfectly cast mini-ensemble. Judy Greer is great as Pat’s wife Linda, who we discover might be having an affair. Look for a funny cameo by Katie Aselton, Mark Duplass’s real-life wife and co-star on FX’s comedy series “The League”.

This is by no means game-changing comedy, but it’s a nice respite after 2011’s offering, which is part of what makes it so appealing. “Jeff, Who Lives at Home” is more of a recipe than a formula. I certainly won’t give away all of the ingredients, but I can say that I left the theater smiling.