Posted by Michael Parsons on October 7, 2011 in Movie Reviews / No Comments

(This review was originally published on October 7, 2011 at The Rogers Revue)

Director Shawn Levy inaugurates the fall movie season with “Real Steel”, a frustrating effort that proves the rope-a-dope can be just as effective on a human audience as it is against a 2,000 lb. robot with nitrous-fueled jabs. Set in the year 2020, the film takes place mostly in the underground world of robot boxing and is ostensibly a testosterone-driven underdog story that syphons inspiration from the usual classics like “Rocky” and “Every Which Way But Loose”. But there is a very different story lurking behind the mechanized mayhem, a predictable, overplayed melodrama that might have been called “A Boy, His Robot and His Deadbeat Dad” if just one more “I’m coming with you!” had been uttered. 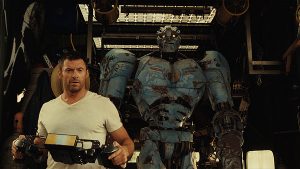 It’s a shame, because the strongest parts of this movie are, in fact, the fighting scenes between the  mechanical brawlers who ultimately get their thunder stolen by the ridiculous human characters who control them. But to give “Real Steel” a fair shake, it has a definite direction, and though not a particularly original one, it is consistent. The visual  aspects are all surprisingly good, from set design to the robot FX, and in somewhat anti-“Transformers” fashion, animatronics are the predominant effect, occasionally coupled with state-of-the art ‘motion capture’ for the CGI scenes that render the robots with impressive realism and ultimately make them the most believable part of this film. Sugar Ray Leonard was also consultant for the boxing techniques and movements in order for the robots to effectively mimc real professional fighters.

Hugh Jackman plays Charlie Kenton, an ex-fighter turned underground robot-boxing promotor who seems to be losing an ongoing bout with society. With plenty of gambling debt, warm beer for breakfast, and a half-ton fighting robot named Ambush in the back of his trailer, Charlie arrives at a county fairground to negotiate a match against a bull – notably a low point in his career, and the best part of this movie. Both the robot and his handler get the horns, so to speak, as Ambush meets its demise and Charlie must evade an additional $20,000 that he can’t pay to rival promoter Ricky (Kevin Durand). He heads for the hills, but shortly thereafter is informed of the death of his ex-girlfriend, with whom he has an eleven-year-old son named Max (Dakota Goyo).

The film immediately takes a turn as a goofy, off-balance story of redemption and reconnection, plummeting into all the cliches and trappings of a Disney Channel movie if given an $80 million budget and infused with some intermittent violence. In an extremely unlikely arrangement, Charlie ends up getting temporary custody of Max by default until the boy’s aunt Debra (Hope Davis) and much older, well-to-do husband (James Rebhorn) return from a long trip.The estranged pair hit the road together in an effort to find a match for Charlie’s newly procured fighting bot, a hi-tech heavy hitter fresh off the pro circuit in Japan named ‘Noisy Boy.’

Most of what follows is the typical meteoric rise with the compulsory speed bumps, as “Real Steel” quickly finds itself somewhere between a children’s movie that is too violent and an action movie that isn’t violent enough. Either way, it seems entertaining enough for a certain demographic, and I was definitely impressed by the detail and creativity in the design of each robot. But “Real Steel” goes way overboard with the precociousness of the kid, who learns Japanese from video game bootlegs, knows how to reprogram a control board and is more adept at underground betting odds than most bookies. As Max becomes the centerpiece of the film after discovering a second generation sparring bot named ‘Atom’ in a scrapyard, the boy and machine develop an ET-like bond that becomes mawkish; the film eventually finds its low point in a hip-hop fusion scene of “Billy Elliott” meets the “Iron Giant” as the kid does a dance routine with Atom using his ‘shadow function’. Charlie claps and says, “You should do that in the ring!” After that nonsense, the rest of the film seems almost moot, but in retrospect I think I saw it coming.

Steven Spielberg, who this year alone had his hand in the production of “Super 8”, “Cowboys & Aliens” and the CGI driven “Transformers” sequel is among a long list of producers here, including Robert Zemeckis and Shawn Levy himself. John Gatins, whose body of work is a veritable library of feel-good fare like “Summer Catch”, “Hard Ball” and “Dreamer”, rewrote the script from Dan Gilroy and Jeremy Leven, which is based on the 1956 short story ‘Steel’ by Richard Matheson.

Jackman portrays Charlie as more of a degenerate than I think was intended, and it fuels the imbalance of the film especially with Goyo’s overbearing enthusiasm as Max. The supporting cast seem like props, which is difficult to do with Evangeline Lilly who is underused as a struggling boxing gym owner and Charlie’s old flame. Anthony Mackie is competent as a good hearted bookie, but the two ridiculous pseudo villains played by Karl Yune and Olga Fonda seem like they were transplanted directly from a “Fast & Furious” entry.

My biggest struggle with “Real Steel” is the fact that the characters ultimately contradict the films family-oriented message; Charlie doesn’t seem to care about the kid until it helps the advancement of his career and Max appears more aggravated by his custody arrangement than remorseful about his mother’s passing. Everyone’s reluctant, and nobody seems to care when it really matters. Somehow, I think this one would have been better if left to the robots.