Posted by Michael Parsons on August 21, 2011 in Movie Reviews / No Comments

(This review was originally published on August 21, 2011 at The Rogers Revue)

“Summer Pasture” is a keen, unimposing observation of Tibetan culture that finds an  emotional common ground with its audience, a curious comparison to our own  domestic lives and how we interact. Directed by Lynn True and Nelson Walker (with co-director Tsering Perlo), this 86 minute documentary about nomadic life avoids getting caught up in socio-political lamentation, deciding instead to convey a very personal message about a family, their history and how they deal with a changing  environment. Filmed in the summer of 2007, the story follows a group of migrant yak herders who travel along a route of designated pastures in eastern Tibet. They settle for the summer in the nomad community of Dzachukha, resting at an altitude of approximately 15,000 feet in the hills of the Kham region. The windswept landscapes are well lensed by Nelson, who doubles as the cinematographer, capturing the resplendent and fertile pasture that is abundant with vegetation for the herd. They’ve erected massive tents that are spaced about a hundred yards apart from one another, their interiors resembling shanties full of cooking devices and makeshift items for various uses.

The documentary focuses on Yama and Locho, a young married couple with a newborn daughter who they affectionately refer to as ‘pale chubby baby’, a tradition in  which children don’t receive a name until they are one or two years old. Yama is a strong woman that prefers not to be idle, and doesn’t like her husband idle either. “It’s not good to do nothing,” she says in between drying dung for the fire and churning yak butter for the winter. Objectively their routine appears harsh, with a 3:00 AM wakeup call, a newborn and a constant need to replenish their resources, but it’s apparent that they are more than content with their circumstances. Locho has been a yak herder since he was six years old, the same year his mother died. “That was when I started to follow the yak’s tail,” he says, and he has been a nomad ever since. “I wouldn’t give up the nomad lifestyle for anything.” 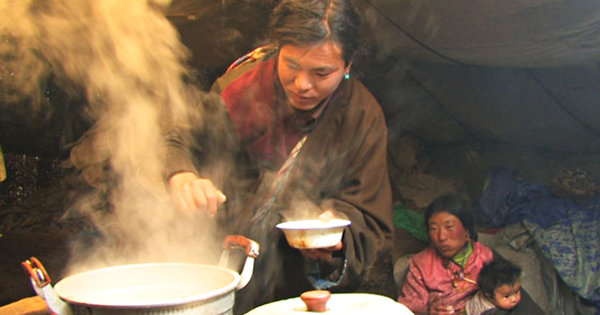 The women in the camp appear to bear the brunt of the work. “I’ve learned that housework is more difficult than herding”, Yama says, perpetually multi tasking. She cooks and cleans while her husband obsessively applies face cream and complains about how elusive the yaks have been.  But if Locho appears lazy, it is only relative; in addition to  herding, gathering yak hair and making rope, he and the other men are responsible for all business and legal matters that apply in the community.  It’s a six hour ride to the nearest town in order to sell their goods, and negotiations prove challenging for Locho; the financial stability of the family is dependent mainly on livestock and a supply of caterpillar fungus, a valuable commodity that is sold and used in various forms of Chinese medicine.

Both Locho and Yama are illiterate, a common trait of this 4,000-year-old culture  that  puts them at a massive disadvantage in the developing world. School hadn’t really been an option for either of them, and they agree that relocating to a town when their daughter is six will be necessary  for her to receive a proper education. This is a trend that has grown amongst their kinsmen over the years as the local economy has improved, diminishing the nomad population in the eastern regions.

Aside from the challenges of their everyday survival and dwindling numbers (the nomad population in the region is still around 40%) , the family contends with congenital health issues, inclement weather and at one point the dissapearance of seventeen yaks overnight. As a testament to their resolve, Yama and Locho’s unflappable optimism is what dominates “Summer Pasture”, relegating the outside world to a  moody backdrop behind their personal life. It’s not until the end that we learn of the real hardships they’ve  overcome in their marriage and  that what ultimately makes this thing work is Yama’s resilience and commitment to her family.

This is a solid documentary that finds itself dragging through a few mundane moments but ultimately accomplishes what True and Walker set out to do, providing us with a rare and accurate glimpse of a bond that transcends its unforgiving surroundings and a group of people caught in the midst of a massive cultural change. The lighthearted aspect of this quiet and personal examination gives the film a sustained positive energy that should resonate universally as they share their story through a mixed style of  observational filmmaking and interviews. “Summer Pasture” is a tribute to the endurance of their marriage as much as it is the culture, an example of a union that is successful in the least privileged environment imaginable.