Sometimes, you go into movies with some sense of what to expect. But when a film’s tone runs a wide gamut from straightforward western to comedy to drama to social commentary, aided by a score pitched just as mightily – such as The Old Way does – the viewing experience is a bit head-scratching. Director Brett Donowho’s choices make for engaging viewing, in that you’re always wondering what he’s going to throw at you next, but there’s no doubt that it’s also challenging at times. 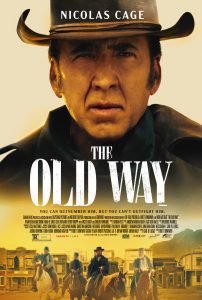 Reconciling the film’s heavy content with some of its adornments make The Old Way a curiosity. At face value, it’s relatively straightforward – it’s a well-worn tale of a ruthless gunfighter who’s changed his ways and become a family man, but his past comes back to haunt him and run him to his end. From Bend of the River to Unforgiven to John Wick, it’s a familiar trope, one that suits Nicolas Cage’s Colton Briggs just fine.

Briggs is seen in the early goings, standing by while a man is prepared to be hanged. We take him as a member of the hanging party, but when a rescue effort is mounted, we see Briggs remain calm as gunshots fly all around him… until they start pointing guns at him. His quickness with the steel is established, and so is his ruthlessness – he kills everyone who dares to aim his way, on the side of the law or otherwise, ending with Briggs shooting a man right in front of his son.

A quick “Twenty Years Later” title card later, and we’re looking at his wife Ruth (Kerry Knuppe) and daughter Brooke (Ryan Kiera Armstrong) in the morning on their farm. Briggs is a family man and general store owner, part of a community that he seems to fit into without any trace of his past. That is, of course, until one James McAllister (Noah Le Gros) and his gang come riding up to Ruth while Briggs and Brooke are in town. When Briggs returns to the farm and U.S. Marshal Jarret (Nick Searcy) and his posse greet him instead of Ruth, the stage is set for what Beatrix Kiddo once called “a roaring rampage of revenge.”

Well… sort of. There’s Brooke to think about, and he actually contemplates shooting her to cut every tie before he goes on his revenge mission. Instead, he begins to instruct Brooke in tracking, hunting, and murdering the men who killed Ruth. Shades of Leon: The Professional and Cage’s own Kick-Ass start to creep in, especially the latter, considering Briggs’ and Brooke’s atypical personalities. Carl W. Lucas’ script occasionally acknowledges both of their neurodivergences, leading to a scene between the two that marks them firmly as father and daughter.

It’s an odd pairing – old west and modern takes on mental divergence – and it does slow the film up a little (especially a campfire scene that seems to go on for some length), but these scenes impart humor and humanity through Briggs and Brooke that give the film a little more depth than the rote characters that surround them. McAllister is the weaselly gang leader stringing his boys along with the promise of a fortune in cash while he plots his revenge against Briggs.

Lucas’ script comes off uneven, spending too much time in some scenes without spending enough time in others. But every now and again, there are some terrific, thoughtful bits of dialogue that almost come off as poetry. When Briggs wakes Brooke up, he says this to her: “I heard gunshots coming from across the canyon… gunshots might have a way of speeding some folks up, but they have a nasty habit of slowing other folks down.” There’s a certain elegance to this observation on gunfights, and Cage is afforded the lion’s share of the script’s eloquence, whether he goes on about how the dead don’t need anything or how his life changed once he met Ruth and how Brooke is “supposed” to feel about losing her mother.

But while Lucas’ script contains a world of emotion, violence, and stray humor here and there, director Brett Donowho tries to wrangle it into a straightforward film. However, the package’s look and feel are anything but. Sion Michel’s photography is too clean and bright, feeling less dusty and western than it should. It feels like an additional color timing pass and possibly toning down Andrew Morgan Smith’s obtrusive score might have aided things, but that’s not what we received.

What we’re left with is a film that boasts good performances, a script that more than borrows from its fair share of influences, and an uneven overall tone doesn’t shake us from the film, but it makes us wonder what we’re watching. Most of it is straitlaced western melodrama, but we’re yoked every now and again with unexpected humor, whether intentional or not. As I said before, The Old Way is a curiosity – compelling enough to stay within its confines, but leaning into near-parody with some of its machinations. It’s goofy without meaning to be, but who knows? If I didn’t know any better, I’d say this has the markings of “cult favorite” written all over it; given enough time, this movie will find an appreciative audience who’ll claim it for their own.