Posted by Eddie Pasa on January 5, 2023 in Movie Reviews / No Comments

When the trailer for M3GAN smashed onto the internet in October 2022, it was an immediate hit. A story about a life-size AI doll charged with protecting an orphaned child from anything, including other kids? And it also danced? There was nothing that social media didn’t love about it, turning shot sequences from the trailer into quick memes and going viral faster than you can say “Ermahgerd! Berks!” 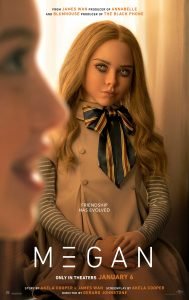 Would the finished film deliver on the trailer’s potential? M3GAN has answered with a resounding “YES.” A sci-fi/horror thriller and family drama all rolled into one, M3GAN kicks off 2023 in delightful style with New Zealand director Gerard Johnstone making a stunning American studio debut. Helped along by fellow Kiwi horror auteur James Wan (bearing story and producing credits), Johnstone has fashioned an absolutely tight and lean movie, not just in pacing, but in drive.

There are no moments or shots wasted; Johnstone channels us straight into why we’re here, taking Akela Cooper’s crackling script and matching his visuals to its thundering wants. What it wants is to jolt us early with the tragic death of Cady’s (Violet McGraw) parents before dialing it back a bit as she is transferred to her aunt’s custody. Gemma (Allison Williams) doesn’t have time – much less the capacity – for Cady living with her, as Gemma’s got a deadline at the toy company where she’s made her name as the engineer behind a Furby-like toy. 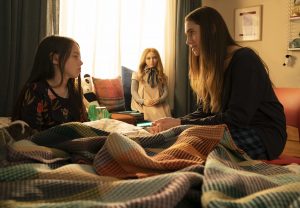 In these opening minutes, we notice a marked difference between “adults” and people who are “adulting.” Cady’s stereotypical Millennial parents bicker about driving in mountain snow with no chains on their tires before making the fateful decision to stop in a whiteout and wait for a snow truck. Not incredibly smart, as the truck comes… just not how they expected. Likewise, Gemma has all the looks of being an adult, but can’t connect to Cady physically or emotionally, leaving her to the TV and not letting her play with her toys that “aren’t toys – they’re collectibles.”

There are adults in this film, lest you wonder – they’re more in positions of power, such as Cady’s therapist and Gemma’s Board of Directors. Every other twenty- or thirty-something is written and performed more like overgrown children, especially Gemma’s boss, David (Ronny Chieng), whose purposes are to make money and order his underling around. Gemma’s engineer staff come off a little like geeks in their perfect milieu, while Gemma herself is so involved with her work and a new prototype she’s working on – the Model 3 Generative Android… M3GAN for short. 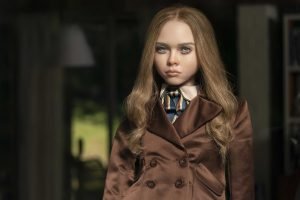 Physically played by Amie Donald and voiced by Jenna Davis, M3GAN is the equivalent of James Cameron’s Terminator – a humanoid robot with a learning computer for a brain – packed into a four-foot-tall, titanium-framed doll complete with facial expressions and a gentle bedside manner. However, in the rush to put M3GAN in front of Cady to help her grieve and heal, the only instruction Gemma gives M3GAN is to protect Cady, both emotionally and physically. Asimov’s Three Laws of Robotics, nor his Zeroeth Law, come into play at all here; there’s nothing stopping M3GAN from fulfilling her one mission.

As one would expect, the repercussions of not giving M3GAN limits and operating parameters are felt little by little. While Cady gets attached to her new companion – and thus distances herself from her flesh-and-blood relative in Gemma – M3GAN learns slowly about human interaction and becomes more of a family member than Gemma has been to Cady. Johnstone allows us to fully grasp how M3GAN sees those around her through long looks at how Gemma handles police inquiries and her lackadaisical neighbor who doesn’t respect boundaries. And with superhuman strength and methodical cunning, she embodies what Mr. Pink said in Reservoir Dogs: “(If) you’re standing in my way… one way or another, you’re getting out of my way.” 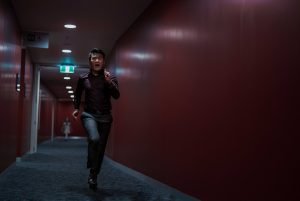 Thus, the battle for Cady’s soul begins, with M3GAN getting the upper hand due to her sympathy and empathy; M3GAN listens and pays attention, whereas Gemma has only left her to her own devices, unsure as to how to proceed as an aunt, parent figure, and adult. No physical affection is shared between Gemma and Cady, leaving this robot made of metal and wiring as Cady’s only source of comfort. Cooper’s statement on how much we rely on technology isn’t just subtext in her script; she screams it far and wide, urging us back toward reconnecting with our humanity lest we become machines ourselves.

M3GAN is a fantastic film that doesn’t aspire to be anything except a hell of a thrill ride, from the tragic opening to its action movie-esque closing. Every scene tells a story vital to the film, even if it’s something as neutral as M3GAN standing at a window observing a moth. There’s surprising depth, emotion, and – quite frankly – fun to be found within this film, and there’s a good examination of the current state of the human condition, reliant on technology to the point of losing the skill of actual human connection. Akela Cooper’s lean script and Gerard Johnstone’s clean and focused direction combine to make a startling first impression for 2023, blasting our high expectations to bits with this sci-fi/horror howitzer.