Posted by Eddie Pasa on January 19, 2023 in Movie Reviews / No Comments

Calling itself “an unabashed love letter to Sam Raimi’s EVIL DEAD series,” Fabián Forte’s Legions (original Spanish title: Legiones) is content to take a completely different approach altogether to the fight against the undead: playing it absolutely straight. That’s not to say there’s no physical comedy or gore in the film; on the contrary, there is more than enough here for horror fans to enjoy. But there are no overexaggerations – well, beyond the whole supernatural thing – as the film never gives itself the chance to devolve into camp. 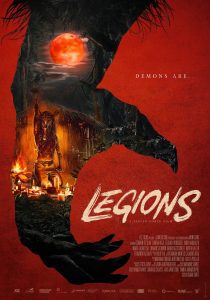 Which is also a slight drawback, but not if you’re in the right mindset, which I realized after thinking about it. If you’re expecting the hijinks of The Evil Dead, where slapstick reigns and goo gushes aplenty, temper your expectations now. Legions is for sure a terrific film, but get all visions of silliness out of your head. The comedy is in its rather serious tone, with our guide Antonio (Germán De Silva) leading the way into a rescue mission with deadly stakes.

Life as we know it hangs in the balance, with a demon called Kuaraya threatening to tip it at the next blood moon. Of course, when we meet Antonio in the present day, he’s a far cry from the young, forest-dwelling brujo (Spanish: “male witch”) we see in the film’s cold open. “I prefer to call myself mediatory between worlds,” Antonio says. He is also the last of his sacred bloodline… well, at least the last of his sacred bloodline that has carried on the family business. His grown daughter, Helena (Lorena Vega) has renounced these ways and gone corporate with a steady job at a marketing firm. She’s even got a lawyer for a boyfriend, as if to cement the transition from a brujo’s daughter to a full-fledged member of well-to-do society. It’s this world in which Antonio seems both stranger and citizen. When exit the opening flashbacks and find Antonio in a mental facility, we see that he has maintained his intensely serious personality, which grounds us and allows us to truly track his story, from protecting his family from Kuaraya in their hut to this approaching apocalypse. I can’t really describe this sense of groundedness (if that’s a word); it’s like a steady boatman piloting amid a river of squabbling piranha, if you can dig it. The more crazy things get, the safer we feel when Antonio’s in the room, whether it’s facing down a clawed demon or contending with his inmates regarding a play about his life being rehearsed.

Antonio’s locked away and unable to stop what’s coming, no matter what he tries to do to convince Helena to acknowledge her lineage and to step into the battle. The evil is on its way… or is it already here? In true Raimi fashion, Forte gets right into the gore, splatter, and unnatural body movements (the latter of which freak me out), peppering the audience with some genuine frights while Antonio figures out his next moves. One manifestation looks straight out of Raimi’s 1981 classic, while others are fresh nightmare fuel, such as the dark Kuaraya. It’s a beast out of your worst dreams, blending with the shadows and striking just as you see its red-eyed glare. Forte keeping Kuaraya’s appearances to a minimum recalls shades of Steven Spielberg’s Jaws, in which the shark’s limited screentime only made it scarier when it showed up. 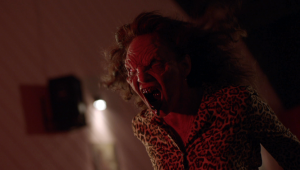 It’s little nods like this to not just The Evil Dead, but to all of horrordom that make Legions a fun time. But Forte’s own imagination rides just as much on these wheels as his various homages, and there’s a fun will-they-or-won’t-they (not like that, you sickos) feel to Antonio and Helena’s tug-of-war. Kudos have to be given to both Forte and De Silva for creating and executing a depiction of a man whose voice never rises above a shout – not even when he’s being tortured – and whose actions define him more than any mouthful of dialogue. De Silva plays Antonio with a knowing vibrance cloaked in the intensity of someone who knows and has accepted his fate, and Forte’s solid writing and direction never make Antonio veer off-track.

Forte gets our laughs by specifically not making Antonio go for them, instead allowing the hilarity around him to brisk up the runtime and to give us some kerfuffle. The contrast between the mental facility antics and the layer of dread draped over everything is stark and necessary, each making us appreciate the other as we’re about to get smothered by them. Forte dials up the wackiness of Antonio’s inmates just to the point where we wish for a bit of darkness to even things out, and he comes through wielding said darkness like a sledgehammer. This constant push-and-pull vaults Legions into being the “love letter” it professes to be while evolving and creating its own identity: something that has a sweet heart and soul while finding the time to throw a ripped-off jaw our way.