Posted by Eddie Pasa on January 11, 2023 in Movie Reviews / No Comments

Much like any “stranger in a strange land” film, Kitchen Brigade (original French title: La Brigade) mines its comedy and tension from two disparate factions having to learn about each other. There’s the initial standoff, followed by a gradual armistice which leads to understanding and cooperation. And, of course, who can forget the happy-happy endings where everyone applies what they’ve learned? 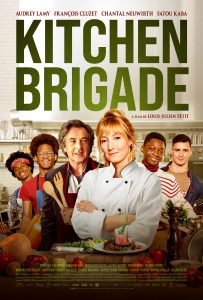 Kitchen Brigade doesn’t stray from the formula but adds enough of its own oomph to rise above similarly-themed films. It lies in the goodwill the film fosters through its eager performances and its lifting of the disadvantaged. And it also doesn’t hesitate to show that things aren’t always perfect and don’t work out the way we all hope, which is a reminder of the reality of this story’s environment.

We’re shown the crux of this film through the eyes of driven chef Cathy Marie (Audrey Lamy), who’s just quit her job after falling out with her celebrity chef boss over Cathy’s own recipe. She speaks in the clipped patois of someone used to brevity and efficiency, someone who doesn’t tolerate mess in the kitchen or her personal life. And when she takes the only opportunity open to her – cooking and serving food in a male youth hostel for migrant refugees – she balks at the looming mess she’s just accepted. 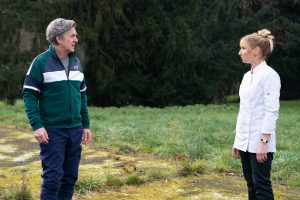 Lamy is rock-solid as this film’s anchor, nailing her chef’s posture, tone, and command, but she also gives Cathy a little knowing twinkle in her eye, as if she’s a step ahead of everyone (which, really, she isn’t). Cathy has been derailed professionally and personally, but Lamy keeps her strong and keeps Cathy’s feet moving forward, even if she doesn’t necessarily know what kind of trouble’s waiting for her… which turns out to be the residents of the aforementioned hostel.

She’s a four-star chef in a no-star establishment… so what’s Cathy to do? As must happen, her first offering is a disaster, in that it’s late and many of the boys have given up on lunch. Her methods and wants are at loggerheads with Lorenzo (François Cluzet), the hostel director who’s trying to get these boys permanent residency in France before they get deported at 18. But seeing who these boys are and what they need, Cathy takes her job one step further and enlists the boys as her sous-chefs, giving them trade lessons in cooking and restaurant management practices. 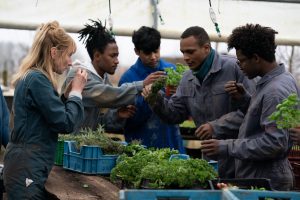 The other half of this story calls much-needed attention to migrant problems and solutions. These boys are in another country through no fault of their own; some of them were sent here as a means of escape, and some were abandoned, but all of them are waiting and dependent on a slow-moving system that doesn’t prioritize them. And when Cathy comes, some boys are eager to be part of what she’s got going on, willing to be taken through the fast paces of a professional kitchen.

Yannick Kalombo puts forth a gargantuan crowd-pleasing turn as GusGus, the hostel’s youngest resident who throws himself straightaway into the knowledge Cathy offers. But GusGus’ openness is contrasted by the brooding Djibril (Mamadou Koita), an older boy who takes no commands from women and who won’t stoop to cooking, something he thinks is a woman’s job. Yeah, I see your grin that says, “Oh, so THIS is the part of the movie where the new teacher finds the tough nut to crack and makes friends!” And you would be right.

But the specters of looming deportation and the possible consequences of a return to their home country hang over every smile and every hearty “OUI, CHEF!” coming out of Cathy’s kitchen. We’re told the boys’ stories – some too nuanced and detailed to be anything but real – and we get a sense of hope that maybe Cathy’s courses could serve as the trade classes required for their continued stay in France on their way to citizenship. Kitchen Brigade wears the possibility of deportation realistically, not just using it as a crutch when convenient or when we need to feel for this film’s subjects. 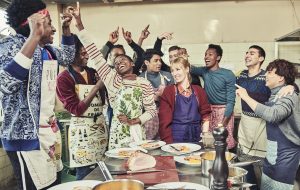 Underdog films like this always have a way of triumphing over their conflicts, but there’s a good bittersweetness at play here. Like a good chef, director/co-writer Louis-Julien Petit knows to balance the fantasy with reality, but without overplaying either or creating an unsustainable pile of one, then the other. Whatever emotions are in play – happiness, sadness, anger at the system, joy in the application of knowledge – Petit ensures that they’re doled out in careful measure, so as not to tip his film to any extreme.

It’s what I’m going to start calling “straightforward with surprises,” in that when we get the laughs or the pain, they come without condescension or too much buildup. The comedy or drama happens as it should without being forced or hyperbolic, earning our smiles or tears by just being real. Kitchen Brigade does well not to delve into farce or sensational drama; its stakes and conclusions are situated firmly in the real without exaggeration. Instead, it’s content being a wonderful depiction of lives colliding and forming new entities or falling away like debris, and it’s also content just being. No artifice, no melodrama; Kitchen Brigade just is, and it shines with the undeniable spirit of “strangers in a strange land” – whether it’s Cathy or the boys – finding each other and lifting each other up.