Posted by Eddie Pasa on January 19, 2023 in Movie Reviews / No Comments

Alice, Darling is a snapshot of a woman in hell. Completely lost and drained of life, it takes two women to bring her back to the land of the living, and even their combined efforts still might not be able to break through. We’re put right in the titular Alice’s (Anna Kendrick) physical and mental space, made to feel every ounce of turbulence in her life, whether it’s from her psychologically abusive boyfriend Simon (Charlie Carrick) or if it’s an outpouring of love her well-meaning friends, Sophie (Wunmi Mosaku) and Tess (Kaniehtiio Horn). 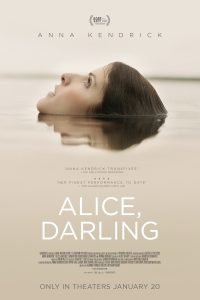 Alice is lost; worse, she has lost her own sense of self. She can’t seem to function without looking over her shoulder nervously, even when around Sophie and Tess on a night out at a wine bar. And when she’s cornered emotionally, she winds her hair tightly around her finger, resulting in alarming clumps of hair coming free when her panic attack is done. Although Kendrick herself is physically small, she plays Alice as even smaller figuratively, having retreated into herself as a form of self-preservation.

Why? For the love – or what she thinks is love – of Simon, a stereotypical “tortured artist” who blames everyone but himself for his misfortunes, turning his anger on Alice (seen mostly in flashbacks) and belittling her constantly. The trouble is that after so much of it, there’s not much she can do but accept it; however, all that is already done by the time the film starts, and when we first meet her, she’s already so far down the hole that she believes the things he says. 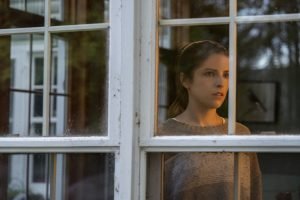 But we don’t get that at first glance; we see a timid-looking woman who doesn’t seem to be in step with her surroundings, sure, but it’s only after we see her interact with Sophie and Tess that we notice something completely off. It’s as if she’s being controlled by marionette strings by someone who’s not even in the room with them, and it doesn’t take much for her friends to notice, especially when they bring up the subject of their vacation together.

This week-long girls’ trip to Sophie’s childhood lakeside house is the core of Alice, Darling, a place where the three go to get out of their heads and reconnect. However, there’s some kind of tension between Tess and Alice that doesn’t seem to exist between Sophie and Alice; it’s something a little more than Tess’ tougher love contrasting with Sophie’s kinder, more gentle touch. And with an entire week to themselves, the two have time to coax Alice back to herself – that is, unless Simon decides to pay an unwelcome visit, either in Alice’s head or literally in person. 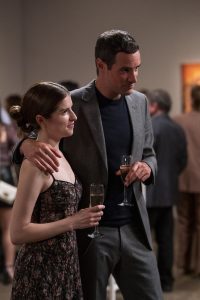 For her directorial debut, Mary Nighy asks us to step alongside Alice as her soul slowly claws its way back to the light, locked away by Simon hammering his controlling words and manner into her. This isn’t some frothy comeback story with quotable dialogue and other such fripperies; this is as realistic as it gets, and Anna Kendrick guts out a heartbreakingly solid performance to make it stick. Sadly culling from experience (she has given interviews regarding her abuse), Kendrick lays Alice’s embattled being bare, crawling into her mental shell to protect herself from even those who love her. Not enough can be said about what Kendrick does to bring us along on Alice’s trudge toward rediscovering herself, slowly shedding ounce by ounce of fear and regret until we might finally see a glimpse of the woman she once was.

As it takes two of her friends to help Alice regain command of herself, it takes two excellent actors to fill the roles with solemnity and respect, and Wunmi Mosaku and Kaniehtiio Horn are exactly what this film needs. Mosaku plays Sophie as giving and gentle, hoping that these traits might be an inroad to Alice and a way to unravel what’s been done to her. Oppositely, Horn spices Tess with the more serious side of her character from the Canadian TV hit “Letterkenny,” imbuing Tess with a harder edge. Where Sophie might pity Alice and her predicament, Tess cannot abide watching Alice submit to Simon’s manipulations, disgusted with how Alice comports herself and making no attempt to hide it. 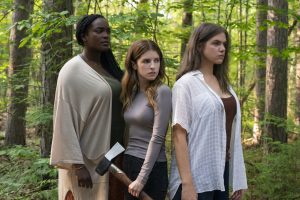 Sophie and Tess’ double act generates the required strength to hold their friend up amid awful circumstances. Alice, Darling is unsettling stuff, with Mike McLaughlin’s cinematography discomforting us by capturing Alice with intimate proximity in the worst of her struggles. But it’s also hopeful to see the three women sharing themselves in a hard-fought effort to save Alice’s drowning spirit. Pretenses are eventually dropped; motives, quarrels, and secrets are uncovered; and, best of all, friendships are rekindled. No one said trying to rescue the lost was easy, and Mary Nighy makes an impressive debut by helping us experience every last obstacle on Alice’s way back to herself.