Posted by Eddie Pasa on November 17, 2022 in Movie Reviews / No Comments 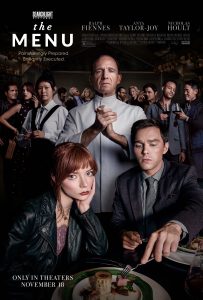 When the lights go down in a movie theater, imagine the kind of people sitting in front of the screen, awaiting the untold treasures that a group of creators have put together for them to view. Or it could be walking into an art installation, the creator hoping like hell the people walking in front of their canvases, photographs, sculptures, or whatever they’ve chosen to express themselves will find something that speaks to them on some level. Or maybe it’s a musician playing their original compositions to an audience – some of whom are there because they genuinely love said musician’s work, some of whom are there as critics, some who might think they can do it better than the artist themselves, or some of whom might just be there because it’s considered “the thing to do.”

The way we consume media and art has – largely through the advent of social media – become a sort of contest, racing to our keyboards to show that we’ve seen or done something and here’s our opinion on it! And if it’s not “first!”, it’s more of a status or gatekeeping thing, as if to show some kind of presumed superiority over a newbie because you’ve read more comic books or seen more movies than this one person who’s dared to say they enjoyed something that tickles your experience meter. Or you might be one of those people who doesn’t give a rat’s ass about what’s going on, just so long as you’re seen in fantastic company. 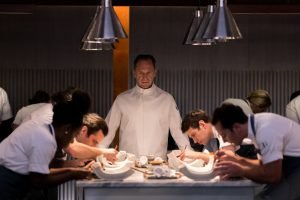 Well… Executive chef Julian Slowik (Ralph Fiennes) has a cure for this kind of thing. Welcome to The Menu, a diabolical multi-course meal bent on exposing how art is no longer considered art and enjoyed as such. Slowik’s restaurant, The Hawthorn, is an exclusive establishment only accessible by boat and seemingly only for the moneyed, and his cuisine – the trendy “molecular gastronomy” spheres and reductions and essences – is undoubtedly the finest there is. But with every dish set before this night’s clientele, every sharp command, and every room-silencing CLAP of his hands, there is a task being carried out – one that the Hawthorn diners could never expect.

Let’s see who’s dining at Slowik’s tables tonight… ah, yes. Noted food critic Lillian Bloom (Janet McTeer), who could make or break someone’s culinary career with her praise or damnation. A past-his-prime movie star (John Leguizamo) who’s trying for any way back to the spotlight, which involves him appearing at trendy places and with all the right people. Struck-it-rich startup guys (Rob Yang, Arturo Castro, and Mark St. Cyr) who have no idea what they’re doing; they only know that this level of exclusiveness has been opened to them because of their good fortunes. The Liebbrandts (Reed Birney and Judith Light) – a wealthy couple who’ve attended more than their fair share of dinners at the Hawthorn. 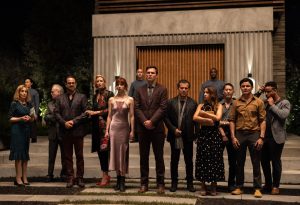 Which brings us to Tyler (Nicholas Hoult), a guy who thinks he knows everything about what Slowik does, and his date Margot (Anya Taylor-Joy), Tyler’s last-minute replacement after his original date cancels on him. Tyler’s written and performed as the expert, a guy who cares more about the food than the absolute horrors unmasking themselves as the night progresses. We all know a guy like this – someone who takes the fun out of everything by overanalyzing and picking things apart until there’s no joy; there’s only what this guy thinks is important, and woe betide you if you don’t find it important, too.
(Note: Sometimes, I *am* that guy, and I apologize profusely to anyone whose night was ruined because I felt too self-important.)
(No, I sincerely mean this. I’m sorry.)

But the meat of The Menu lies in Margot’s measured character reveal while Slowik’s menu slowly unfurls, as each course brings about a new revelation about either of them. Early on, it’s hinted that Margot doesn’t belong there, but why? As the film progresses, Slowik grows more and more agitated at her presence; at first, we pick up on the tension that Slowik’s majordomo Elsa (Hong Chau) puts across at Margot, but screenwriters Seth Reiss and Will Tracy tease her purpose out until Slowik’s fairly screaming at her. Director Mark Mylod takes this thread and makes it the most fun of the entire film, with both Fiennes and Taylor-Joy firmly holding down their positions, with little precious ground given on either’s part due to who they are and what they do. 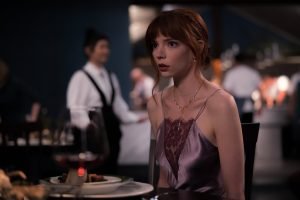 Slowik has prepared a repast of vast delights, but who are they to delight – him, or his guests? We get that the staff at the Hawthorn are well-trained, moving as one with singular purpose, ready to defend their creations and accept punishments for their mistakes. But with this meal, lives are on the line, as evidenced by an abrupt suicide which swings this dinner party into the macabre. This film’s dark comedy ranges from the physical to the extreme mental absurdity of Slowik’s plan – and that’s not even counting the cryptic bon mots he dispenses before each dish is served.

We experience a strange mélange of terror and discovery as Slowik brings his metaphorical axe to grind in front of his guests, and he isn’t afraid to turn it into a literal blade as he feeds his guests exactly what they should have. (Oh, don’t worry – even he’s not exempt from his own torments.) The title cards accompanying each dish – whether edible or not – describe everything in full detail, right down to the emotions felt by the people executing them. And the more insane the dish, the more chances you’ll find yourself barking with uncomfortable laughter, as if Mylod needed to insert them to break the tension, only to ratchet it back up once we’re out of the scene.

This examination of creation and judgment – and Slowik’s ultimate motive – is all about us. We don’t appreciate art for art’s sake or savor it; we consume it, gobbling up everything it has to offer before wiping our mouths and moving on. And some of us don’t even know why we’re doing what we do – putting up with popular music that brings you no joy, going to the latest big action tentpole film to have something to talk about at the water cooler the next Monday, eating at a trendy restaurant where the food sucks but you have to say “It’s good!” because you don’t want to be seen as “uncultured” – it’s just expected that we have to consume.

What Seth Reiss and Will Tracy have written into The Menu’s script is how far we’ve pushed ourselves just to be tantalized by the supposedly out-of-reach when the simpler pleasures – the ones that started us loving whatever it is, be it food, art, etc. – are still there to be enjoyed. The Menu is wild, ebullient satire that doesn’t mince words in taking its aggressions out on the aggressors. Mark Mylod directs with razor-sharp precision, mirroring (and giving rise to) Slowik’s kitchen operations. The ingredients are set, each station is prepped, and the audience’s stomachs are growling with anticipation. All that’s left is to put everything together to see how it sits on the palate; for me, it sits outstandingly well.