Posted by Eddie Pasa on November 3, 2022 in Movie Reviews / No Comments 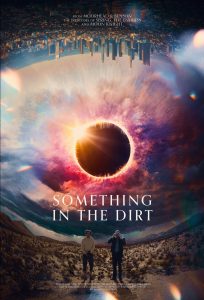 Conceived and filmed during the 2020 COVID-19 lockdowns, Justin Benson and Aaron Moorhead’s Something in the Dirt finds them at their most intimate and stripped-down. Cast and crew were limited to 12 people (making for a short closing credit roll), and the film was shot in Benson’s own apartment. There is very limited set decoration and a profound lack of heavy CGI.

But in this sparseness comes a highly imaginative, intelligent DIY film that, to me, speaks louder of Benson and Moorhead’s versatile storytelling capabilities. We’ve seen a lot of lockdown-era movies over the last few years – some shot completely on Zoom, others shot with similarly-limited casts and crews, and some shot by families. With the kind of spectacle and wizardry Benson and Moorhead bring to every project, how could they make the impossible possible? What would be their hook to differentiate their film from the rest?

The answer: a mystical, broken ashtray. Or what looks like half a decorative glass egg. It’s never described as anything for sure; it first appears when a down-on-his-luck Levi (Benson) sees it on his closet floor and brings it outside to ash in when he bums a smoke off John (Moorhead), his self-appointed neighborhood welcome wagon. What transpires during this initial meeting between strangers is a testing of limits; John fibs about Levi’s new apartment while Levi tries to discern what kind of person John is.

Some of their conversations sound like the geneses of ideas and stories, and with their easy-seeming banter, it’s not that far a stretch to think that we’re looking into their real-life creative minds. The way Moorhead gives John a knowing air of (sometimes false) bravado balances the diffidence and unsureness Benson uses to stock his portrayal as Levi, especially after we find out more about why Levi’s now living in an apartment complex next to John. Their characterizations go into overdrive when they meet this Benson & Moorhead film’s source of extraordinary – the ashtray, which now floats of its own accord and bathes the room in a crystalline glow.

At least once in every Benson & Moorhead film, regular people are faced with the extraordinary – the being at the center of The Endless’ machinations, a woman revealed to be a vampire, a drug that takes you back in time – and what makes these films touchstones is not the extraordinary itself, but how others react to it. With respect or horror. With denial or reverence. With loud shouts or hushed tones of awe. Straddling these lines with their reactions, Levi and John decide to film the floating ashtray and the weird occurrences which surround it. In questioning their role in all of this, Levi makes a pact with John that aims more for respect and safety than John’s awe-turned-belligerence over the film.

I don’t know if “belligerence” is the right word. Maybe it’s a more take-charge kind of thing; he doesn’t experience Levi stepping up, so he has to be The Guy, and it’s a mindset that evolves from confused awe to almost apathetic over the film’s proceedings. There’s much more to this floating ashtray, evident in antiquated communication styles and how the light it refracts takes familiar shapes. But while Levi is hesitant to push it any further, John doesn’t think they’ve pushed it far enough, which starts their acquaintance down a path darker than the one taken by their eponymous characters from The Endless.

One could almost see parallels to the creative process, where an idea forms between two people and a large game of “throw shit at the wall and see what sticks” ensues. Something in the Dirt operates on these very principles; it even goes so far as to mention exactly how this movie’s going to work in the opening minutes, where someone says that Levi and John fell into the trap of assigning meaning to anything and everything. But that’s the fun of creation and mystery; these two might’ve intended only to go knee-deep into these waters, but it’s almost a surprise when they find themselves almost up to their necks, and it’s not just the ashtray that’s getting weird anymore, either.

My favorite thing about Benson & Moorhead films is that at some point in the film, they go past the confusion and chaos to tunnel straight down toward their characters’ consequences. The beauty of it is that none of what comes before this point is window dressing; they layer meaning and subtext into everything, making you want to hit the rewind button when it all comes down to see what you missed. Something in the Dirt is no different, except that no one’s friends here; while their previous films have dealt with friends, co-workers, or brothers experiencing the weird, there’s another level of unease that gets added with Levi and John barely knowing each other, amplifying the danger that the two men and the unnatural events in Levi’s apartment represent.

Something in the Dark feels like familiar territory, but Benson and Moorhead wisely steer us away from the rote and normal, veering down dark avenues with no fear of getting a little of that darkness on you. It’s a lockdown-era movie that doesn’t feel like a lockdown; in fact, you kind of forget that most of the movie is a bottle episode shot in an apartment. Because of the personal revelations, journeys, and turns Benson and Moorhead have written and performed, it feels like a larger world we’re stepping into with no map to guide us, and the thrill of the unknown that they give us far outshines its physical trappings.