Posted by Eddie Pasa on November 23, 2022 in Movie Reviews / No Comments 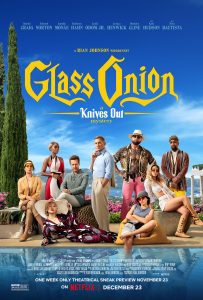 The panache and glamour of both detective Benoit Blanc (Daniel Craig) and the high-profile mysteries in which he is embroiled have a gravitational pull like few others. It’s the fulfillment of the promise of a goofy time amongst people who purport to be close friends or family, winding up quite opposite that as the plot unravels. In the two films where Blanc serves as the Southern-accented Hercule Poirot-type interloper, his suspects are the rich and powerful who almost dare him to point his finger at them, lest they use their resources to forge his ruin.

However, Blanc remains… Blanc. And thank God for that. Striking gold once again with Craig is director/writer Rian Johnson, back alongside Blanc for another thrilling Agatha Christie-esque go-round in Glass Onion (only co-titled “A Knives Out Mystery” for marketing purposes). Filmed in the summer of 2021, this is Johnson’s first film since the series progenitor Knives Out debuted in 2019, and he doesn’t miss a beat, confidently in command of our attentions, beckoning us to not miss a clue as Blanc is challenged once again to rise to a dastardly occasion. 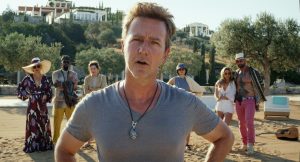 This time, however, he’s not investigating after the fact; instead, he’s an invitee to tech billionaire Miles Bron’s (Edward Norton) Greek island lair, a guest among other social, political, and industry luminaries. Automatically, we’re caught in spin as we get to see Blanc step out of his comfort zone as detective and into having to deal with events as they occur. This single displacement is Johnson’s greatest storytelling asset, as we experience Blanc thrown completely for a loop while Bron and his guests alternately praise and backbite each other.

Blanc’s genteel manner is no match for Bron, a guy who has everything he wants and flaunts it with a falsely humble, pseudo-enlightened façade while an undercurrent of inadequacy prickles at the edges, forcing itself visible when others start to take the spotlight. As the film progresses, it’s not much of a stretch to see Bron as an Elon Musk analog (even the name strikes a resemblance), someone whose reputation as an innovator rides on an altogether different background created by others. 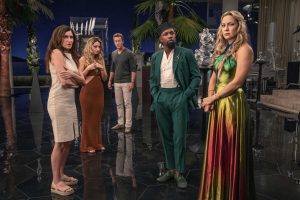 It’s these others – scientist and Bron’s underling Lionel Toussaint (Leslie Odom Jr.), socialite and fashion queen Birdie Jay (Kate Hudson), U.S. Senate hopeful Claire Debella (Kathryn Hahn), MRA and YouTuber Duke Cody (Dave Bautista), and Bron’s former business partner Andi Brand (Janelle Monáe) – who were there during Bron’s nascent phase, forming a coalition of societal “disruptors” to make noise in their respective industries. Now, they’ve been invited along with Blanc on a murder mystery weekend. The victim? None other than Bron himself.

Don’t worry about the murder mystery; the real mystery lies in the relationships surrounding Bron. All of them owe him something as a result of their fame or notoriety, and grumblings of resentment are barely concealed under their grin-and-bear-it masks. While most of them are ecstatic to venture out to Bron’s private palatial estate (which, as it happens, includes a larger-than-life glass onion), one of them is decidedly not, for reasons that become shockingly clear toward the middle of the film. Although twists are rife throughout the film, there is one that turns this film on its head and slams it resoundingly against the screen, shading everything before it in a truly beguiling light. 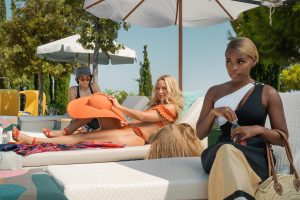 As proven with Knives Out and his low-key high school gumshoe film Brick, Rian Johnson has the skill to maintain layer upon layer of guessing and second-guessing until we’re driven mad by the possibilities this story holds. Some actions in plain view make the viewer wonder, “Did I just see that, or was that wrong?”, and Johnson dances away from it as if maybe we weren’t meant to see it, or if we did, we start wondering if we saw it correctly. Johnson gives us a lot of carrot-dangling, but the funny thing about it is that every carrot leads to a new revelation or insight which leads to either the truth or another meaningful dangle. He doesn’t give us red herrings the way he did in Knives Out; we’re fed straight-up with what’s there for everyone to see.

It’s not to make us feel stupid; he does this to keep us in the game, to get our feet moving as we scamper alongside Blanc as he attempts to pick up the threads left for him by each participant. Glass Onion is a wholly immersive experience, involving us from the first second and not letting us go until the explosive finale. In between, we’re regaled with a whopper of a tale told by fine storytellers on both sides of the camera. Johnson brings back mainstay cinematographer Steve Yedlin and editor Bob Ducsay, both of them working overtime to keep us engaged and on our toes with their visuals and pacing, capturing production designer Rick Heinrichs’ intricate set nuances and Jenny Eagan’s playful costumes (complete with a Magnolia look from 1999) with care, leaving us to warm ourselves in the sun-soaked surroundings and feel like the upper crust for a brief moment. 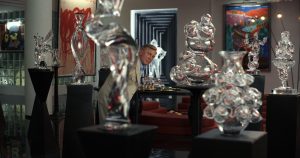 Charged with leading the ensemble, Daniel Craig once again strides high as Blanc, the “Kentucky Fried Foghorn Leghorn” detective with a nose for trouble and an intuitive eye for the suspicious and elusive. Craig drives a stake through this film’s core as the bedrock upon which crosses and double-crosses are built; we have so much fun walking in step with him that we forget that there’s a dead man in the room – yes, an actual murder occurs – and he has to sort out this jumbled mishmash of personalities one by one, and it’s a joy watching him work.

It’s wonderful to see former bit actor Kathryn Hahn (y’all remember her in Anchorman: The Legend of Ron Burgundy?) step into the spotlight and enjoy her time as a double-dealing bureaucrat, sinking her barbs into her role and creating the perfect conniver, someone who has to find the perfect words to wriggle out of every obstruction deterring her from her goals. Countering her is Leslie Odom Jr., playing the voice of fact and reason, yet still smarting from some of Bron’s business decisions that serve as a knife in his back. The bubbly Birdie Jay could be played by none other than Kate Hudson, who uses her spritely, pixieish front as a weapon, oozing charm which also has the schmoozy bite of someone veiling contempt for those she considers undesirable. And as the bull in the room, Dave Bautista pushes hard into toxic masculinity to define his cock-strutting, gun-toting, wild-man character whose sole purpose is to put everyone off just by being himself. 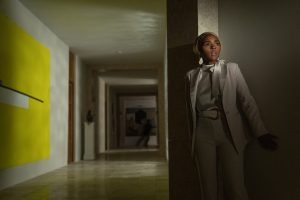 But it’s Janelle Monáe who lights up the screen as Bron’s bête noire Andi, “the monkey in the wrench, the pain in the ass,” as an embittered New York cop once called himself. Monáe gives Andi the brooding presence of one who knows too much, and it’s against everyone’s interest that she’s joined the party. Andi’s not there as a mere buzzkill; as the most purposeful character next to Blanc, Andi is made to move wraithlike among the others, and Monáe fulfills this purpose with every step she takes and every glare she throws, electrifying the screen and making us hang on her every word. Monáe is this film’s treasure to be discovered and celebrated, pulling us opposite the fun-seekers and forging what looks to be a sinister path.

Glass Onion is at once a throwback to star-studded ensemble mysteries and its own fresh entity. It uses time-honored traditions while injecting a sly sense of fun and shenanigans, somewhere between not taking itself too seriously and taking itself seriously enough for the stakes involved. Benoit Blanc’s no moral stalwart like the aforementioned Hercule Poirot, unwilling to bend for justice’s sake; he does whatever he can to achieve justice, including fudging a few things here or there, and that’s the charm of Knives Out and Glass Onion. It makes us simultaneously laugh and recoil in horror at the darker side of humanity, wielding a duality of purpose and innuendo that forms a lethal mix that only Rian Johnson could cook up.