Posted by Eddie Pasa on October 19, 2022 in Movie Reviews / No Comments 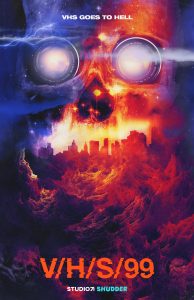 Who knew the V/H/S series would be as fun as it is? After ten years, a new band of writers and directors have kept this franchise going… and have actually improved upon it. With a tighter and more hilarious frame story – which eventually dovetails into the usual band of hooligans doing hooligan shit – and continual sharp, short shocks, V/H/S/99 is the best of the series, maintaining a tightness and consistency that eluded previous episodes.

It’s another “found footage” anthology, so throw any sense of composition, good acting, or nuance out the window. We’re strictly here for the freakiest mise en scène the filmmakers can plan for their subjects to be lucky enough to catch. Folks who threw up watching The Blair Witch Project would be wise to turn away, but those seeking nightmarish short stories are in for a treat with these five rapid-fire tales. This time around, there are actual visceral surprises and honest-to-gosh scares (to the point where I had to pause my screener to take a break). V/H/S/99, like the other four movies before it, is essentially a visual representation of scary stories being tossed around a campfire, each person trying to one-up the last story told. And as the night progresses, the stakes get higher, the carnage gets worse, and the thrills become unbearable. 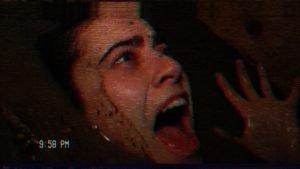 Wisely, this anthology starts off with a facile “break into an abandoned building where people died” story to ease us in and to adjust us to being bombarded with unstable camerawork and dark spaces. “Shredding,” a look at four “KAH-RAY-ZEE!!” kids/band members/Jackass wannabes who venture into a condemned underground hangout, primes us for keeping our eyes moving and expecting things or beings to pop up here and there as the camera pans past. Of course, as obnoxious as these kids are, you’d expect their comeuppance to arrive quickly, but after a few fits and starts to get us relaxed and comfortable, the horror begins and keeps barreling toward us.

“Suicide Bid” is the scariest of this quintet, a quick shot of adrenaline and fear wrapped in one sorority hopeful’s attempt at surviving a hazing ritual. Writer/director Johannes Roberts – whose earnest shark attack film 47 Meters Down sported its own brand of aquaphobic frights – makes fast work of his segment, which sees our sorority pledge being buried alive. Right there, we’ve got one ready-made “nope” situation, but the hapless girl’s plight gets worse by leaps and bounds in short order, resulting in a knockout round of ghastly terror. It’s almost a shame this one comes up so early in the rotation. 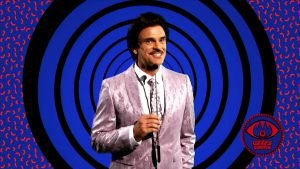 The least believable of these stories is the third short, “Ozzy’s Dungeon,” featuring The Walking Dead’s Steven Ogg (well, he’s been in a ton more than that, but we gotta keep it horror, y’know?) as a Double Dare!-type game show host accused of rigging the game against its players. From the physical set to the forced acting from all involved to the cagey CGI, this is the most uneven in form, fashion, and style. Half of it is supposed to be pro-shot, similar to a game show, but director Flying Lotus doesn’t quite hit the mark; the other half is the intended amateur hour, which is where the majority of Flying Lotus’ impact can be found, thanks to the wild turn Flying Lotus and Zoe Cooper’s script takes.

The fourth short, “The Gawkers,” ties the frame story to a larger narrative about randy teens spying on the gorgeous woman across the street… who possesses an odd collection of stone figures. More to the point, stone heads. Writers Chris Lee Hill and Tyler MacIntyre (the latter of whom directs) start with a more subtle approach, hitting us with the rambunctiousness of youth along with how easily teens can gloss over details that might prove useful in the future. This portion of V/H/S/99 readily brings to mind the V/H/S/2 closer, “Slumber Party Alien Abduction,” only with something a little more sinister at play than a UFO invasion. 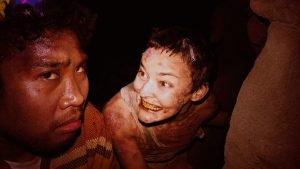 But the fifth tale… oh, yeah. This is where V/H/S/99 goes stratospheric. “To Hell and Back” starts off as an “innocent” look at a cult attempting to give a host body to a demon on New Year’s Eve 1999 – figuring the veil between worlds would be the thinnest at the turn of the millennium – but the videographers assigned to capture it all are mistakenly sent to Hell. That’s right – Hell; fire, brimstone, winged humanoid creatures, unyielding rock structures, macabre visions of the damned (what did that poor baby do?!), lightning illuminating terrifying spectacles, and bodies and remains strewn across the ground like a Giovanni da Modena painting. I, for one, would love to know where Vanessa and Joseph Winter shot this sequence, as it features some of the most interesting landscapes and caves I’ve ever seen. But while Joseph Winter and Archelaus Crisanto are endlessly fun to watch as the two unfortunates caught up in this mess, it’s Melanie Stone (as one of Hell’s citizens) who sears her performance into our memories. Her quick turn as our guide through Hell is an absolute delight, definitely the most interesting of the whole movie.

As before, you’re not going into any V/H/S volume for the best in visual or artistic filmmaking; you’re here to have fun and enjoy each yarn being spun before it gives way to the next. While V/H/S set the tone, V/H/S/2 upped the ante, only to be followed by two serviceable (albeit forgettable) collections with V/H/S: Viral and V/H/S/94. V/H/S/99 comes in like a sledgehammer with devastating impact, not wasting a minute of our time on overselling the drama. Instead, it goes straight for the kill and does so five times over with effective use of the short time allotted to each hair-raising anecdote. And with V/H/S/85 waiting in the wings – shot secretly alongside this sequel – our appetite has been simultaneously appeased and whetted, hoping for another killer installment.

Not Rated by the MPA (contains horror violence and gore, adult situations, nudity, and language throughout – equivalent to R). Contains a post-credits scene. Running time: 109 minutes. Released by Shudder – streaming on their network 10/20/22.
Posted in Movie Reviews