Posted by Eddie Pasa on October 5, 2022 in Movie Reviews / No Comments

Author’s note: There’s something weirdly awesome and kinda nuts about watching a screener of a movie called Hellraiser and seeing a “Property of Disney” watermark pop up every now and again. 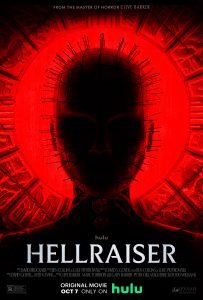 Welcome to the new Hellraiser, a surprising revival and reboot of this 35-year-old film series. Like the ten films before it, Hellraiser is based on a novella by Clive Barker, The Hellbound Heart, in which he details the twisted delights a puzzle box grants to those seeking gratifications beyond any human capability. Where his original story centered on one man’s escape from the Cenobite realm, director David Bruckner’s stellar revamp brings it a little closer to home by giving us more identifiable characters and an easier way to unlock the original films (no pun intended).

Time and technology have finally given the Cenobites and their leader, The Priest (Jamie Clayton) a chance to be properly introduced to the viewing public. No longer bound by devious leather (oooh!), radical piercings (shudder!), a hint of body modifications (scandal!), or any of what 1980s society deemed perverse or aberrant, we are able to fully realize and face the horror of unchecked hedonism being pushed into a world where pleasure isn’t enough and pain is its only rival and, given time, its boon companion. And this ghastly mixture of pain and pleasure can last forever. 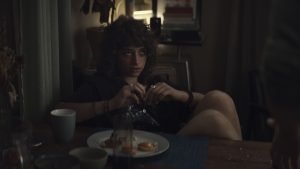 One of the series’ most confounding aspects was always the Lemarchand Configuration – i.e., the puzzle box that opens the gateway to The Priest (we dare not speak the name which Barker himself detests) and the Cenobite horde. It’s also referred to as the “Lament Configuration,” but it is only in this film that “Lament” is given context, mostly in regard to lead character Riley McKendry (Odessa A’zion). In her first five minutes, Riley’s established as our tragic lead, said to be a recovering addict but still drinking and using drugs. She’s building herself a life full of regret, especially as her brother Matt (Brandon Flynn) is trying to take care of her but gets constantly slapped in the face by her insolence and disregard. Her new boyfriend Trevor (Drew Starkey) doesn’t seem to be helping much, which seems contrary to them having met at a 12-step program.

A’zion plays Riley as a user, both of illicit substances and people; when their usefulness has given out, she turns on them like she was doing them a favor instead of the other way around. Riley’s narcissism is at a tipping point where the last vestiges of her humanity are up for grabs to the highest bidder – either toward regaining what’s left of her life or throwing it all away on drugs and in-the-now pleasures. Thus, it’s easy to see that when the Lemarchand Box falls into her hands and starts whispering its hushed promises, it’s not long before the box is opened and the Cenobites come charging through to take what they can get. These pleasures don’t come without a steep price, as Riley finds out; not only is her brother gone, but her sanity might be slipping away as well, combined with visions of horribly disfigured people looming out of nowhere and disappearing just as quickly. 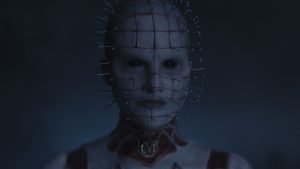 The updated Cenobite designs reveal a beauty in their excruciatingly torturous trappings, symbiotically exhibiting their brand of diabolical sadomasochism. At once horrifying and tantalizing, we can see how far figures like nail-studded Priest and the Gasp (Selina Lo) have been pushed – and how far they can push – into a space where pain and pleasure exist on the same plane, and one cannot tell the difference from the other. In Barker’s original story, the Cenobites are sexless, having every bit of sensation taken from their bodies, both physically and mentally (and we see how they come to be this way, rest assured), thus requiring more bodies to feed upon. To this end, The Priest is now more of an androgynous specter instead of a male-presenting Hell overlord, and Jamie Clayton steps into this role with assuredness and a quietly firm, compelling power, creating a whole new interpretation of The Priest that is undeniably gorgeous, frightening, alluring, and repulsive all at once.

Ben Collins and Luke Piotrowski’s knowing script crackles with a self-aware smartness and sass, but not of the meta variety; it’s more grounded, in the way that 20-somethings have become more intelligent in films like these rather than just waiting to be fodder. They also don’t bother going into the origins of the Cenobites; they are the oncoming force, dispensing with any appeals to their feelings. For the first time since the 1987 Barker-directed first film in the series, the Cenobites feel every bit as dangerous as they look, and David Bruckner makes sure to hold them at arm’s length until absolutely necessary, never making them stay past their welcome or oversaturating us with close-ups and gory details. 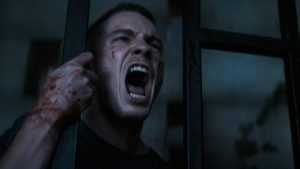 There’s a flavor imparted to the film in its location photography which simultaneously gives it richness and coldness. Shot in Serbia (doubling for the northeast USA for most of the film), the southeastern European architecture and nature become parts of the overarching puzzle in cinematographer Eli Born’s lens, with the human subjects being kept in the maze by subtle lines and boundaries. It’s a subtlety that turns overt in the second half, as the unfolding mystery brings them to a large, imposing mansion once owned by missing billionaire Roland Voight (Goran Višnjić), with the box’s intricate carvings becoming more of a motif in the mansion’s appearance and appointments. Born makes handsome frames out of everything, whether it’s the grime of Riley’s city life, the opulence of Voight’s mansion, or beholding the disfigured Cenobites gathered en masse.

What this film also gets so right is the line between “a lack of good” and “truly evil.” There are examples on either side ranging from the valiant (Riley finally taking responsibility and unraveling what’s happening to her) and the dastardly (Voight won’t let something like a screaming man being ripped apart by chains mess with what he wants), but the Cenobites? As The Priest said in 1992’s Hellraiser III: Hell on Earth, “There is no good… there is no evil. There is only flesh.” The Cenobites are not portrayed as wanton killers; they are summoned, and they collect. Their actions would be considered evil, as they take the innocent along with the guilty, but they are mere machines compared to Voight’s lust for power and what he’ll do to get it. 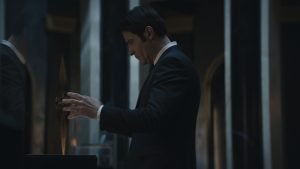 Hellraiser has been rebooted with solid foundations underneath it, hopefully paving the way for a few more stories with similar high quality. While Riley’s addiction is the key to the story and the unfolding plot, she’s also our way out, our salvation; it’s her journey we’re on, and the up-and-coming Odessa A’zion embodies Riley’s struggles with grace and fierceness. It bears a serious tone with loving nods to previous films (listen for snippets of Christopher Young’s score and dialogue references from the first two films, among others), carrying significant weight through its performances and stakes. This Hellraiser is a smashing success in every regard, being bold without being careless or slapdash, being head and shoulders above most modern-day reinventions.