Posted by Eddie Pasa on September 1, 2022 in Movie Reviews / No Comments 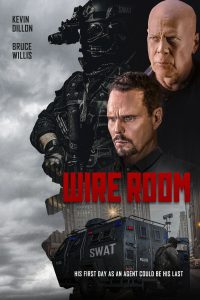 The premise of Wire Room is certainly more interesting than its execution. A lone federal agent in a secure facility tries to prevent a surveillance target from being killed – it’s gold, bearing many opportunities to tell this story with meaning, purpose, and style. As it stands, though, we only have characters we don’t care about in a situation we couldn’t care less about.

Where director Matt Eskandari goes wrong with Brandon Stiefer’s script is a distinctly harsh lack of subtlety. Every thought is said out loud, and no action is undertaken without explaining the reasons for it. And the actors don’t so much “act” as much as they “bark.” It’s as if Eskandari doesn’t trust his actors or the audience to get what Stiefer wants to get across, so everything is simply turned up to 11, uncomfortably loud and in your face. 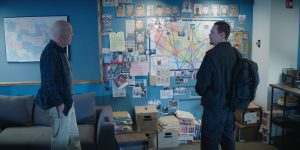 It also doesn’t help that Stiefer hasn’t given the actors much to find purchase with, either. Each character is broadly written as a testosterone-puffed blowhard; a grizzled, belittling drunk; or women who are denied anything outside the range of “annoyance” or “annoyed.” There are no personalities or backstories; there are only dialogue facilitators to get us from point A to point B. And one attempt at making one character’s background a mystery is purely laughable, because by the time it’s addressed, it’s no longer relevant and becomes more of an obstacle keeping us from the film’s ending.

This character, Justin Rosa (Kevin Dillon), has come to a lower-level surveillance gig after 18 years in the Secret Service, as everyone in the film is fond of reminding us. Sadly, Dillon is only given room to chew the scenery, making Justin huff his lines out with manly aplomb in an effort to cover up the fact that, despite his supposed “experience,” he looks like a total rookie, inept in almost every responsibility handed to him by ranking agent Shane Mueller (Bruce Willis). 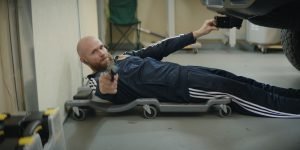 Likewise, Willis is only there to serve as the seasoned, “if it happens, it happens” kind of agent who doesn’t really care about the assignment; he only cares that his people show up on time and do their jobs the way he wants them to. He’s not there to coddle or instruct, as we see in Shane and Justin’s first exchange. Rather, it seems his only purpose is to insult the FNG at every turn, whether it’s for being late or for Justin phoning him when there’s an actual emergency going on with their surveillance target, Eddie Flynn (Oliver Trevena).

Absolutely nothing feels necessary in Wire Room, from the way people act toward each other to the Rio Bravo/Assault on Precinct 13-style assaults on Eddie’s house and the surveillance office. In keeping the film focused solely on the plot and filling it with lurid, arch characters, Eskandari makes Wire Room more of a type of grindhouse film from the ‘70s, a throwback to making action – not characterization – a film’s raison d’être. But not even the action is compelling here; it’s just another means to an end, where nothing matters at all. The stakes and personalities are the artificial, ugly wallpaper that hides an utterly empty film, giving Wire Room absolutely no flavor or meaning.