Posted by Eddie Pasa on September 8, 2022 in Movie Reviews / No Comments 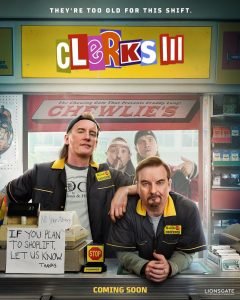 Those familiar with writer/director/film geek paragon Kevin Smith’s story about how he turned his film school education and his convenience store work experience into indie film box office gold will no doubt be enthralled with Clerks III, the follow-up to the 1994 original and its 2006 sequel. 1994’s sleeper hit Clerks spawned an entire microcosm dubbed the “View Askewniverse,” so named after his production company. Characters Dante (Brian O’Halloran) and Randal (Jeff Anderson) have been featured in five of these films, while Jay (Jason Mewes) and Silent Bob (Smith, in what has been called his “Marcel Marceau” role) are the C-3PO and R2-D2 of all the Askewniverse films.

These four characters have evolved and come full circle in Clerks III, with Dante and Randal going from mere employees at Quick Stop Groceries in Leonardo, N.J. to being its owner-operators. Likewise, Jay and Silent Bob have transitioned from being the neighborhood drug dealers disruptively hanging around outside the Quick Stop to being… neighborhood drug dealers who’ve opened a legal cannabis store next door in the space where Randal’s former place of employment, RST Video, used to stand. (Being the lovable but often clueless mooks they are, they haven’t even cleared out the videotapes.) 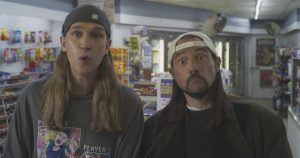 So, too, has Kevin Smith grown – as an artist, storyteller, and human. He has always put a little of himself in every Askewniverse film, from being a convenience store register jockey, an insecure boyfriend (Chasing Amy), questioning his Catholicism (Dogma), to having children and choosing a more adult path (Clerks II). Clerks III finds him at his most personal, culling from all four corners of his life. He’s not just telling the story of his decision to make a film of his convenience store days, but also going into his own health issues which would result in a catastrophic heart attack after taping one of his infamous Q&A sessions.

In Smith’s place, Randal suffers from a heart attack called “The Widowmaker,” as OR doctor Ladenheim (Amy Sedaris) tells him. With all the requisite Smith dick and fart jokes, Randal is set on the road to recovery. Of course, during Randal’s post-traumatic “what does my life even mean?” wonderment, he decides he’s going to make a movie… about his life as a convenience store employee. 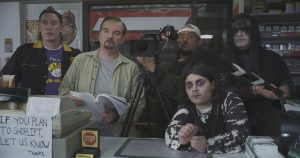 By making Randal the Kevin Smith analog as the actual Smith himself stands by on screen, we’re pulled into this crazy meta existence that features the fictional life Smith captured on 16mm back in 1993 alongside real-life elements involving both the making of the original Clerks and Smith’s own story. Every actor from the first film able to reprise their roles does so – from the leads (RIP Lisa Spoonauer, not appearing in this film) to the memorable bit parts, notably Scott Schiaffo (the Chewlies gum representative), Walter Flanagan (reprising a few of his many Lon Chaney-esque appearances), Betsy Broussard (the “This is the last time I rent here!” video customer), Kimberly Loughran (Alyssa Jones’ sister Heather), Ernie O’Donnell (the infamous Rick Derris), and many, many others.

But Randal’s not the only one who’s suffered trauma; by bits and pieces, we come to know about Dante’s post-Clerks II life. And it’s not good, as we see early on as he opens the store at the film’s beginning; he keeps his panic attacks and feelings buried for Randal’s sake until he’s crying, bearing his internal strife alone. No one – not their Quick Stop underling Elias (Trevor Fehrman), Randal, Jay, or Silent Bob – knows the depths of his pain, because this has been his role since he flopped out of his clothes closet and into our collective pop culture consciousness. He’s always been the steady rock while others pull their shenanigans around him. And we can’t blame him for a heartbreaking choice he makes; it’s not like anyone understands him. They never have, not even when the first frame of his cinematic life rolled in 1994 as he acquiesced to his boss’ request to cover a shift he wasn’t supposed to have. 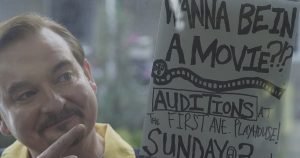 Smith takes almost thirty years of his life as a person, writer, director, father, son, and storyteller and welds them into the structure of Clerks III, from Learan Kahanov’s learned cinematographic visuals (this is the first Askewniverse film not photographed by Dave Klein) to the little things that made Clerks so memorable to every character we see to each sequence framed in some part of Smith’s existence. Smith starts with a more Hollywood approach – cameos and all the winks and nods we’ve come to expect – and gradually pares back to the urgency of Dante and Randal’s friendship and story. The Widowmaker heart attack, his loss of faith (although it probably didn’t reach the exaggeration seen here), his rifts with friends and the process of repairing them, his personal dealings with grief – almost every facet of Kevin Smith’s life is on display in this movie, for better or for worse; thankfully, Clerks III falls on the “better” side of things.

Hockey analysts say that the best players “leave it all on the ice”; here, Smith leaves everything on the screen, holding nothing back in this tribute to his career and the people who helped him start it. When viewed in light of his previous effort, Jay & Silent Bob Reboot, we’re finding Smith in a place where nostalgia and being cheeky meet the tumult of the intervening years giving him something new to say. There’s a maturity and perspective that time gives us as humans – akin to how Obi-Wan Kenobi described The Force all those years ago – surrounding and binding this movie. And with serious emotional breadth, Kevin Smith powers this third-person look at making his first film with a full battery of what life has given and taken away from him, molding Clerks III into an undeniably heart-rending ode to the folks that started it all. 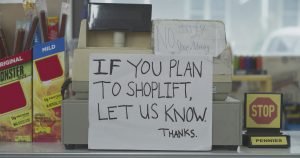