Posted by Eddie Pasa on September 26, 2022 in Movie Reviews / No Comments 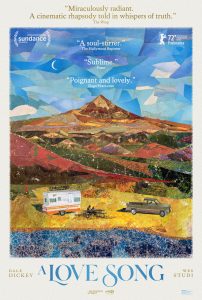 What is a love song but a meditation about our heart’s yearnings? As such, Max Walker-Silverman’s debut film A Love Song is titled very appropriately, being about a woman’s journey up out of grief that has led her to a campsite by a lake. But we don’t know that right off the bat – like any good love song, we first come to know the profound depths of her soul before getting to the good stuff.

And what better actor to portray our central figure than Dale Dickey, whose weathered countenance bears the years of her character’s experiences? Shown to be adept at the tasks thrown at her – whether it’s catching large crayfish in the lake or swapping out a pickup truck engine – we get the sense that Faye has lived. Whether it was a good life or otherwise, we can’t quite tell, but from what little we get out of Walker-Silverman’s lean script, it was quite a life. 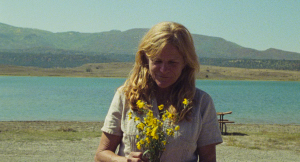 A life with love. We see it in the way she caresses the spare pillow next to her in the trailer she’s hitched to her truck. In the way she goes about her routines, gazing at the wilderness around her, even if she tells us she doesn’t live more than an hour away and that she used to come here for school field trips. Dickey injects a kind of soul into Faye that says, “I’ve been there, I’ve seen it; but now that I have the time, I want to see it some more.”

She’s there on the chance that an old school friend might join her at her campsite. Every day, she looks to the road leading to where she’s parked, ears pricking up at the slightest sound or knock at the door; she’s hopeful, but there’s a bit of armor around this hope. And each time it’s not who she expects, we get a little flurry of activity in an otherwise placid, languid film. It might be the campground neighbors, the mail delivery man and his horse, or a family trying to move something buried underneath where she’s staying. And with each visitor, we see a kindness and an acceptance that Faye gives to everyone, a warmth that comes not with expecting something in return, but in just being. 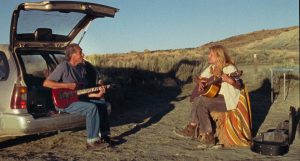 With the scantest of dialogue, we feel the weight of this reunion in every glance and every word passed between them. The looks shared, a song they sing together, taking a swim in the lake, and simply being in each other’s space says more than the barest minimum of words they’re gifted. Silence and expectant hope speak louder than what they say to each other; Dickey and Studi prove themselves to be masterful savants at letting moments breathe, pulling us further into them with every silent moment. 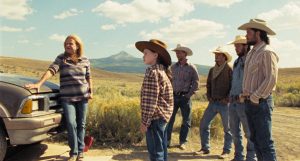 Aided and abetted by Alfonso Herrera Salcedo’s immersive, travelogue-like photography, co-editors Walker-Silverman and Affonso Gonçalves play to spaces and silence, allowing the film to simply be without pushing insistently. It’s a “we’ll get there when we get there” kind of direction Walker-Silverman employs, but he has the good sense to fill spaces with a solemn pensiveness that keeps us locked in with Faye (and Dickey herself) as she moves through her days at the campsite. Salcedo’s camera mostly stays static – you can probably count the number of whips, pans, or handheld shots on both hands – allowing us to appreciate Faye’s solitude and the nature surrounding her.

While Salcedo’s lensing work is gorgeous in its simplicity, it is Dale Dickey who makes this film shine like the dawn breaking over the mountains surrounding her character. She is absolutely captivating in her role, relying more on intimation and a knowing, gentle spirit that guides us through this story. With an artist’s touch, she takes us on entire journeys in each shot, especially one that comes three-quarters of the way through the film, where a close-up catches her unleashing Faye’s happiness, sadness, love, anger, disappointment, fulfillment, and a whole world of emotion in one go. 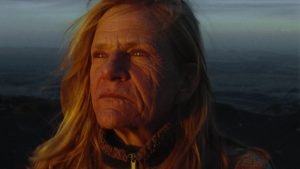 Those looking for “snappy” or “quirky” – especially in this early awards season – need to stop doing that and pay attention to this slice-of-life film that bears some of the most beautiful imagery and one of the year’s best performances. Veteran actor Dale Dickey is flat-out stunning in A Love Song, strong enough to carry every ounce of this film on her back while helping everyone elevate their own contributions, whether onscreen or behind the camera. She is the fuel that gives this film its flame and aura, at once breaking our hearts and stealing them with mighty skill.