Posted by Eddie Pasa on August 29, 2022 in Movie Reviews / No Comments 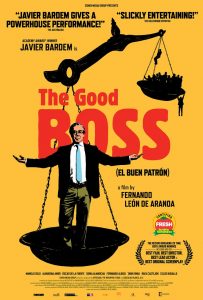 There is a whimsy running through The Good Boss (original title: El Buen Patrón) that defies description. You could call it black comedy, dominoes falling during one man’s week from hell, or just life being the unpredictable bitch that it is, throwing every possible curve at you until either you beg for mercy or take the wheel and drive through everything, no matter who gets run over in the process.

Which is where we find Julio Blanco (Javier Bardem), the seemingly-benevolent president of Blanco Scales, a company that lends its products and its very being to becoming one of the many layers in this business fantasy. At first glance, both Julio and his company are working in impeccable order; everything is just so. The model scale at the gates is looking good, operations are running smoothly, and they’re up for yet another award. 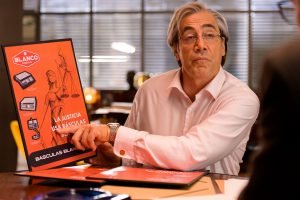 But it doesn’t take us much time to notice something’s awry. A desperate “I love you” from an underling is whispered in protest of her dismissal; there’s grumbling when recognizing someone who needs to get it together, both personally and professionally; and, more noticeably, a distraught terminated employee brings in his children to have Julio tell them that he’s been fired. But Julio can’t bear to have any of these blemish his day, confidently and suavely delegating dispensing with these trifles.

Writer/director Fernando León de Aranoa plots to have Julio involved with every aspect of his favored employees’ lives as he tries to smooth things over and get things working correctly. His wife Adela (Sonia Almarcha) seems to have her life in order; business at her boutique is good, and her support for her husband never flags. The film dwells in appearances, but diving only just a little beneath them brings out the meat and flavor of The Good Boss. And dive into them, de Aranoa does. With glee. 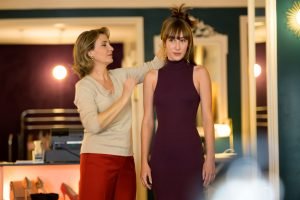 There’s a good-looking intern at the company, freshly arrived and giving Julio flirtatious glances; with Julio’s roving eye, it’s not a question of “if” but “when” they will have their inevitable dance in the sheets. But it comes with a price – a price so damning, it threatens to undo everything he’s worked for, including his life with his wife. Additionally, Miralles (Manolo Solo), one of his childhood friends – now an employee at Blanco Scales – is having trouble with his wife, and the drama gets drawn out with each successive meeting he and Julio have, whether it’s in a restaurant or in a car, having tracked Miralles’ wife to some stranger’s house.

de Aranoa loves to make Julio squirm, never giving him a moment’s peace. But through it all, Bardem gives Julio the front of someone in control and with no problems, even when Julio is faced with a horrible truth. You can see the “Oh, F*****CK!” he wants to scream flit briefly across his face before he wills himself to maintain composure. Bardem spends the movie forcing Julio to keep everything internalized, calculating how each situation will play out. He gives Julio an appearance of foresight and thoughtfulness, but the fun is watching him wriggle his way out of everything putting the squeeze on him. 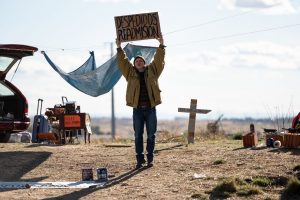 Pau Esteve Birba’s photography glides along with Julio as he transfers his energy from one arena to another, the camera beholding him in heroic, medium-angle positions which keep him as the center of power in each shot. It’s not an overbearing thing; it’s more of a subtle way to define his attractiveness and his skill without being overt. Of course, we know he’s in control, but Birba makes sure he slyly dominates each figure sharing the frame with him. Only once is someone seen above him, and that’s a big hint as to how this person will figure into his life further into the film.

The script is full of little sparks and explosions here and there, slyly digging into corporate culture, its terminology, and the behavior of those in it. When we first see Julio, he’s giving a pep talk to everyone in the factory, using a lot of the same language “Weird Al” Yankovic uses in his satirical “Mission Statement.” The workers’ personalities range from that one guy who cares way too much about his job to the slick dude who just wants to get his job done. (And there’s also that one guy who’s been there way too long who also doubles as Julio’s personal handyman. Keep an eye on him and how Julio treats him.) 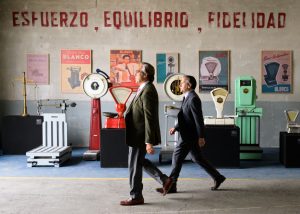 The Good Boss is a hilarious example of what happens when keeping up appearances takes a backseat to the illness festering beneath the façade. It’s fun and awkward in a cringy way to see Julio dodge the various trains being derailed and heading straight to run him over, and de Aranoa knows how to wring the slyest humor out of every obstacle Julio faces. And when the final shot unspools in all its unsettling glory, it’s a crowning moment worthy of all the work done to get there.