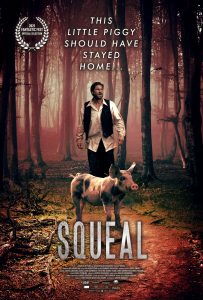 The head-scratching Squeal (former title: Samuel’s Travels) feels like a Monty Python sketch turned completely weird – well, weirder than it probably would be, but compelling nonetheless. Its manner reminds me of a similar film called Men & Chicken, especially with its hard-charging, heavily exaggerated tone. Both these films operate as a stream of consciousness, building each scene with whimsy and violence before arriving at the scene’s point and purpose.

The story is a fairytale of dehumanization and objectification. Our main character is never referred to by name, even though its former title reveals it; he is referred to simply as “The Foreigner” (Kevin Janssens), a man cruising the sparsely populated eastern Europe countryside in search of his long-lost father. He doesn’t even know how to pronounce the man’s name, let alone speak the local language. The barriers are up and the tension is set, especially when farm maiden Kirke (Laura Silina) chastises him for running over her wayward piglet. 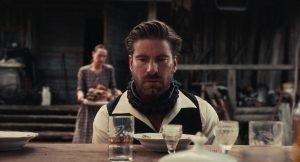 Don’t worry – the piglet survives to become a central figure along The Foreigner’s path that life has suddenly given him. As much as The Foreigner wants to find his father, Kirke wishes for a husband; Kirke’s father Gustavs (Aigars Vilims) wants someone to tend his pigs; Jancuks (Normunds Griestins) wants Kirke’s hand in marriage, thus necessitating a plot to get The Foreigner out of the way; and Jancuks’ “daddies” (his father and his father’s brother) want to flaunt their status as the richest family in town, seen early bossing Jancuks around and making a deal for The Foreigner.

Jancuks, whose wild-eyed countenance enhances his unpredictable nature, is treated like a dog by his father and uncle; the only solace he gets is at Gustavs and Kirke’s farm, and he now has this interloper to contend with, someone who’s going to ruin everything. As the saying goes, “shit rolls downhill” – his preferred way of communicating with The Foreigner are kicks to the head and body, reveling in his chance to abuse someone else the way he’s been abused. 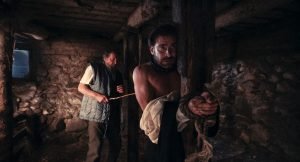 This abuse, coupled with the farm’s remote location, being chained up in Kirke’s pigsty, and the townsfolk’s willing acceptance of this situation, forces The Foreigner to submit slowly to his predicament, becoming Gustavs and Kirke’s dedicated farmhand. With every passing day, he’s treated a little more humanely, in sharp contrast to Jancuks’ devolution from his role as a farmhand to becoming a barking, whining dog.

This darkly comic fantasy plays out like a fairytale, where the hero is good and true, the “princess in a far-off castle” longs for her prince, and the sort-of evil stepbrother wields his wrath with no hesitation. And what fairytale wouldn’t be complete without a surprising connection between The Foreigner and the aforementioned piglet? There’s even a voiceover akin to that of Stephen Fry’s in Garth Jennings’ The Hitchhiker’s Guide to the Galaxy, bearing a similar “this happens all the time” kind of tone in its delivery. 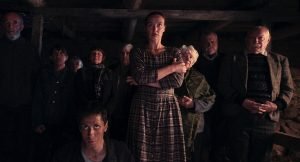 Aleksandr Rodionov and director/co-writer Aik Karapetian’s script plays with our preconceptions upon meeting our characters for the first time. We’re to believe that The Foreigner is our Hansel/Gretel figure, falling into the clutches of an evil witch whose family only wants to trap and kill him. As the film goes on, we see those tropes deconstruct to a near neutral as The Foreigner accepts his new life, but they kick in at a pivotal point as if to say, “Nope – we’re still here.”

Karapetian makes confounding choice after confounding choice to cement his fairytale world, whether it’s making Jancuks whine in a high-pitched canine tone, giving us a beautiful panning shot after all the chaos (Jurgis Kmins’ photographic work is stellar), or subtitling the piglet’s grunt-speak. Squeal is not an easy movie to take, much less understand, but looking at it as a Brothers Grimm-esque story helps it make sense. We don’t quite know everything at play here, but we can infer enough to know that it’s not just Stockholm Syndrome keeping The Foreigner at Kirke’s farm; it’s the sense that we’ve found what we need, even though it may not be what we want, and it’s a weird journey Squeal takes us on to get there.

Not Rated by the MPA (Contains nudity, animal gore, some violence, and language equivalent to R). Also known as Samuel's Travels. Languages: Latvian (subtitled in English) and English. Running time: 85 minutes. Released by Cranked Up Films.
Posted in Movie Reviews