Posted by Eddie Pasa on August 3, 2022 in Movie Reviews / No Comments 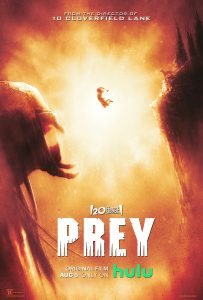 In the last 12 years, we’ve had three Predator films after a duo of why’d-they-bother, cash-grabbing Alien vs. Predator crossover movies. 2010’s Predators was the last good film in the franchise, with 2018’s The Predator being an overhyped disappointment. We’re back into the realm of the surprise and wonder that Predator and Predators gave us, thanks to Dan Trachtenberg’s Prey.

Best known for helming the surprise sequel 10 Cloverfield Lane, Trachtenberg steps boldly into this 35-year-old franchise and pares it back to its bare ethos of man versus something much more powerful. Prey is an entire film made from the last act of 1987’s Predator, where Arnold Schwarzenegger’s Dutch relies on only primitive weapons and the forest to keep him alive against an alpha-hunting alien. 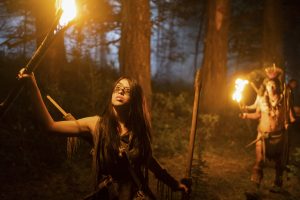 Gone are the confines of the killing jar Dutch uses to trap the Predator in that film, though; here, the expanse that lies before us is pre-colonial America circa 1719. An untamed wilderness provides little cover and few opportunities to fully catch our bearings, heightening the suspense factor and possibilities for maximum terror. Likewise, weapons – both man and alien – are primitive and bring a more tactile, immediate danger than that posed by guns, bombs, and laser blasts.

Seen early in the skies above (a little like the spaceship from Nope) by Comanche villager Naru (Amber Midthunder), we know they’re here; it’s just a question of how and when the Predator (Dane DiLiegro) will make his move. We get a sense of its hunting style as it dispatches all manner of alpha predators before turning its heads-up display – this time, only capable of a fraction of what it can do in previous films – to Naru’s village hunters, men who consider Naru a nuisance who needs to stay home and cook. 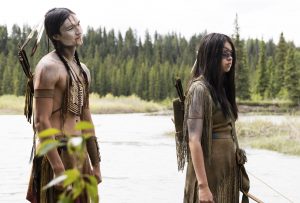 Naru wishes to become part of the hunting party, seen skillfully wielding a hatchet and other weapons. More than that, her instincts are her most vital weapon, giving her an edge over the others, whose bravado only turns them into bloody piles of gore. A brilliant one-take fight scene displays just how deadly she is, but it’s something she has to earn throughout her battle for survival.

Amber Midthunder is a revelation, anchoring this film with a strength and prowess not seen in even the best of veteran actors. She imbues Naru with a self-possessed, assured quality that grows with each step into the wilderness – both figuratively and literally – she takes. This is Midthunder and Naru’s film, both of them defying expectations and creating empowered figures that we want to cheer loudly for throughout.

Dan Trachtenberg’s tight, nuanced direction provides room for following Naru’s journey along with showing us clever, near-iconic visuals that escaped previous entries: a bird’s-eye shot of the Predator tracking Naru through a field; combatants falling in the background out of focus while we remain in close-up on an unsuspecting victim; a cloaked Predator holding a writhing victim over its head, the blood washing down to expose its presence. These and other such vivid creations by Trachtenberg, cinematographer Jeff Cutter, and the visual effects team carry hefty weight in their construction, etching themselves into franchise history. 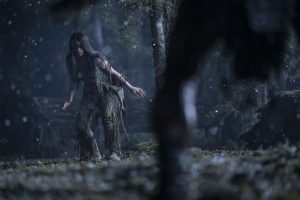 Prey is a tough punk of a movie, daring to be unexpected and succeeding with big-screen might. While canon-standard staples – “If it bleeds, we can kill it,” “Do it!”, and others – are included, Patrick Aison’s script injects freshness into this long-running film series, buoyed by creative stalk-and-slash scenes, lean dialogue, and Amber Midthunder’s bravura performance. A triple-feature of Predator, Predators, and Prey would not be amiss in the near future (Predator 2 was too ‘90s in a bad way), as Prey emerges as one of the best sequels in the Predator series.