Posted by Eddie Pasa on August 12, 2022 in Movie Reviews / No Comments

All you acrophobics in the audience right now who can’t even stand talking about heights need to turn away now. I appreciate you clicking on the link, but I do not wish to cause any discomfort. This opening paragraph is all you’ll get as far as a grace period. So here we go in 5… 4… 3… 2… 1. 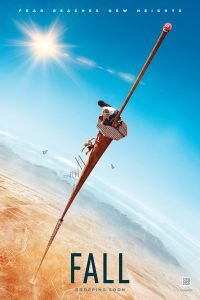 Fall is full-on, crap-your-pants terrifying. Not because of the lean script, and not because of the drama it slowly mines out of two women with existing tensions between them that get exacerbated throughout. It is because of the lengths to which director/co-writer Scott Mann and cinematographer MacGregor go to show the ultimate in fear and isolation without needing to go to a summer camp and have a hockey-masked killer running around.

The story’s simple: a mourning widow is, for all intents and purposes, hijacked into going on a climbing trip with her adrenaline-junkie influencer friend. The target: a 2,000-foot antenna tower in the middle of nowhere. Along the way, some uncomfortable truths about themselves and the deceased are uncovered, and the ladder they’ve used to get to the top falls out from underneath them before they have a chance to descend. 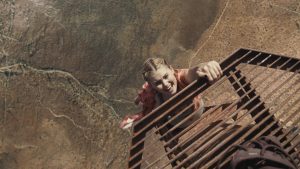 “Descend.” A funny word to use, considering how similar this film is to Neil Marshall’s The Descent, another absolutely horrifying film featuring the similar plotlines of a loss early in the film and the resulting grief being overcome by facing one’s fear. (Or so they’re made to believe.) However, unlike The Descent, there are no other people to share the tension and emotional load; it’s just Becky (Grace Caroline Currey) and Hunter (Virginia Gardner) having to devise a way to either communicate their predicament or get to safety. With only a 50-foot hank of rope, cell phones that have no signal, a drone unit (for Hunter’s social posting), and an ever-diminishing supply of water, the options grow slimmer by the minute.

However, what’s growing is the danger. Exposure at 2,000 feet over a desert, lack of food, the propensity to doze off and lose hold, shady passersby, various injuries sustained in the ladder collapse, and the circling vultures smelling blood… with each passing second, their chances for survival drop and their chance to control the situation is slipping out of their grasp. They’re utterly helpless and at the mercy of an unforgiving environment, dwarfed by an expanse that doesn’t care about them. 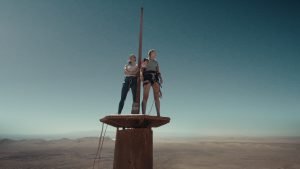 The majority of the film takes place on what looks like a six-foot octagonal platform 100 feet below the antenna’s top, where a red flashing light sits to warn aircraft of its existence. Even before they arrive at this perch, Mann and MacGregor take every opportunity to use a mix of practical camerawork, CGI, drone photography, and the actors’ performances to force our muscles into involuntary arrest. Creaking support structures; loosening bolts; Hunter jokingly shaking the ladder, playing around, and freely dangling from dangerous spots while the traumatized Becky follows out of a sense of duty to her friend; a ladder rung that unexpectedly falls free… our jaws, fists, toes, and various orifices are locked up well before the ladder crumbles into oblivion, thanks to MacGregor’s immersive photography and Rob Hall’s tight, foreboding editing during their ascent.

The filmmakers’ talents kick into overdrive when catastrophe strikes, swirling around the two women and showing the vast nothing between them and the ground as they fight their way to the platform and the rope slips out of their hands. If we weren’t acrophobics before, the climb culminating in this panicky, breathtaking, body-tightening sequence will surely serve to convert more than a few audience members, even while they’re safe in their seats. MacGregor’s cameras swoosh, dip, dive, and widen out to capture Becky and Hunter against their surroundings, the tower becoming their worst enemy as their perspective forces it to disappear into the distance below. 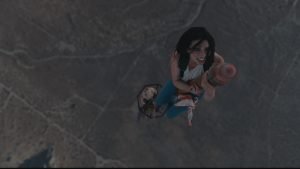 The drama between the women is thankfully handled with a “let’s deal with this first, then we’ll see what happens later” manner, with Mann and Jonathan Frank’s script unwilling to bend and give in to histrionics. It’s a credit to them, knowing full well Becky and Hunter’s precarious existence in the film is enough to send our hearts into overdrive. They have only their smarts and hopes to carry them to the next attempt at salvation, and they don’t have any time to spare to be driven further apart. Both roles are played cleanly and with reserve, allowing more for their circumstance to speak for itself than the typical infighting that usually accompanies films like this.

If the theme of Fall is the conquering of fear, it sure has to answer for giving viewers a new one with effective visuals and sound design putting us right in Becky and Hunter’s shoes. Scott Mann flips the claustrophobia of being trapped in a dark space and translates it startlingly well to the terror of being exposed in the open. When you make a horror movie where the killers are no more supernatural or monstrous than time, nature, and biology itself, you’ve got something special. But when you make this kind of horror movie and the result is as spectacularly thrilling, involving, and gut-wrenching as Fall… Usually, when I say, “Watch at your own peril,” I mean it in a backhanded way; here, when I tell you the same thing, it’s a warning. With no hesitance or doubt, Fall is one of the scariest movies I’ve ever seen.