Posted by Eddie Pasa on August 4, 2022 in Movie Reviews / No Comments 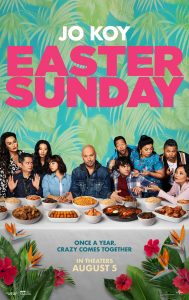 You have to give comedian Jo Koy props for his hustle and how he has seized the opportunity to parlay his tumultuous life into smashing success. Decades before his self-financed 2017 Netflix special made him a worldwide phenomenon at the age of 46 (he’s 51 now), Koy brought the wackiness of growing up in a Filipino family to American comedy clubs all over, doing what it took to score a gig and keep his various day jobs to support his son and his then-wife.

Now, in 2022, it’s culminated in Easter Sunday, a hilarious and heartfelt feature film based upon his life and comedy routines. Those familiar with Koy’s Comedy Central and Netflix specials will see actual physical representations of the characters and situations he’s only talked about. Does it translate well to the big screen? Y’know what – it doesn’t matter. What Koy wants to do is not just make money doing what he does best; he wants to give the biggest audience he’s ever had a slice of what Filipino-American life is like. 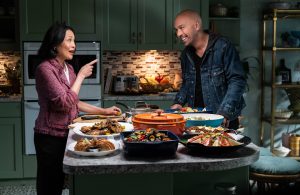 Most of the film works, thanks to Broken Lizard member Jay Chandrasekhar at the helm, whose combination of subtle and over-the-top never really finds a happy medium, but that’s not necessarily a bad thing. On the contrary, the ebb and flow of comedy and drama in this adaptation of Koy’s life help us appreciate the funny a whole lot more as opposed to noticing when it’s not working. A lot of it has to do with the film’s charm and plentiful good nature, which is offset by a ham-fisted attempt at throwing in superficial action or danger that nearly stops the film dead in its tracks.

Ken Cheng and Kate Angelo’s script is reminiscent of every other “struggling _____ trying to make things happen has to contend with a disappointed family” film, right down to the “Let’s only change the lead actor’s last name for his screen character” thing so prevalent in films like this. There’s the usual omission or lie that grows out of someone’s control, thus leading to a big blow-up later. And there’s a subplot about a crazy-eyed gangster who’s looking for money owed to him, and if he doesn’t get it by a certain time… well, there are guns waved around and threats levied ominously. 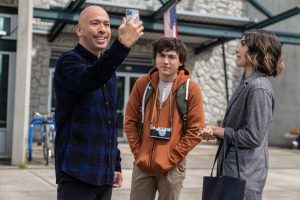 These are the only things holding Easter Sunday back from being an outstanding film, but they don’t drag it down. Instead, Koy and company outshine the script’s cliché trappings with aplomb and vigor, getting right into the spirit set forth by Koy’s stories and making themselves at home with us. One of the facets Koy wishes to stress is that Filipino families share the same stresses, concerns, and love universal to most families trying to keep it together in the face of adversity.

Speaking as a Filipino-American who’s experienced a lot of what you see in the film, Cheng and Angelo mostly get it right, especially when it comes to Joe Valencia (Koy) doing everything he can for his son Junior (Brandon Wardell). While Joe endlessly does his stand-up, takes auditions for TV shows, and works his guts out, Junior only sees it as Joe selfishly not being there for him, one of many rifts that need to be rectified before film’s end. Another fracture lies between Joe and his mother Susan (Lydia Gaston), as he’s taken a path she didn’t want for him, and he wants to look like he’s made good when he takes Junior on an Easter Sunday trip five hours north to his hometown Daly City. 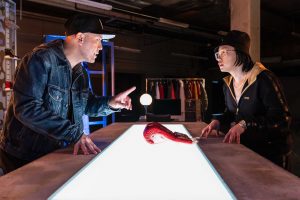 And the elephant in the room threatening to ruin this visit is inept cousin Eugene (Eugene Cordero), to whom Joe’s lent a significant amount of money to get Eugene’s taco truck going. It turns out that Eugene’s switched it up to a “HYPETRUCK!!” which sells Fendi bags and other such goods, but he sold the items fronted to him by gangster Dev Deluxe (Asif Ali) and kept the cash. And now, Dev and his gang are looking for Eugene to pay back $40,000 before nightfall.

It’s a plot point that screams out of left field and almost undoes the film at its core. And it’s a shame that it had to be tied in so tightly to the rest of the story, because the family tensions between Joe, his mother, and his Tita Theresa (Tia Carrere) would’ve been enough to make a movie on its own. Chandrasekhar is at his directing best when he’s focused only on Joe and his family, whether it’s the big deal they make over Junior finding a potential girlfriend in Tala (Eva Noblezada) or watching the petty squabble between Tita Theresa and Susan play out. 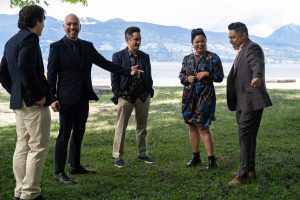 Thankfully, these family melodramas outweigh the artifice of the Dev Deluxe track. Like Dante Basco’s The Fabulous Filipino Brothers (released earlier this year), Easter Sunday makes the most of the inner workings of Filipino family life, complete with the weird sense of humor and overblown concerns and fears making mountains out of molehills that seem to come as stock and trade with families like ours. It’s the little things – how much we have to prove to our families, the religious imagery in our relatives’ houses, and how our hearts are lifted when we join together and sing, especially if it’s karaoke – that speak the truth in Easter Sunday. This adaptation of Jo Koy’s life hits more than it misses, and it’s an endearing reminder of the presence of love in all the hustle and hard work.