Posted by Eddie Pasa on August 12, 2022 in Movie Reviews / No Comments 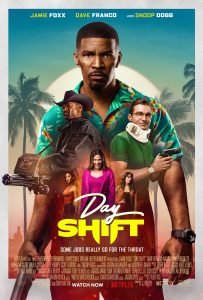 Now, this is a vampire story I can dig – a workingman’s vampire movie that leans into its action and comedy elements with gusto and sass. Day Shift revels in making vampire hunting a blue-collar occupation, the way that we’d look at pool cleaners, plumbers, and other similar tradesmen. I’m sure this kind of conceit has been put into stories here and there, but writers Tyler Tice and Shay Hatten have a peculiar way of making it exciting and bureaucratically nonsensical at the same time.

When we first meet Bud Jablonski (Jamie Foxx), he’s breaking into a San Fernando Valley home with various weapons at the ready. Of course, we’re shocked when the owner of the house – a kindly elderly woman – asks him what he’s doing and gets a shotgun blast in return. But when her limbs start contorting like Chrissie in Stranger Things 4 and she revives with fangs, it doesn’t take much time to settle in and have some fun.

Bud’s on the outs with everything – life (he lives in a stereotypically skeevy Los Angeles apartment building), his wife (they’re separated and she’s intent on moving to Florida), his daughter (he’s continuously late to pick her up from school), and the vampire hunter union (for having broken too many of their codes). Putting Bud in the desperate seat early on kind of makes him a bit of a whining mark, especially when he goes before the union president to get his job back. Even his friend Big John (Snoop Dogg) needs to tell him to shut up when he vouches for him and pleads Bud’s case.

This side of him takes a backseat to a confident poise when his extremely greenhorn union rep Seth (Dave Franco) is thrown at him as a probationary partner. Seth’s a bumbling desk jockey who’s never killed anything before, and he’s about to partner with someone who spares nothing when it comes to killing vampires. A lot of the comedy is given to Franco, who goes full-on nerd – a fun contrast to Foxx’s play-it-cool-but-GIMME-MY-SHOTGUN turn as Bud. Where Bud goes into combat with guns blazing and kukri knife swinging, Seth’s reaction is a little more… well, let’s face it: Seth needs new pants after going up against these fast-moving creatures of the night. 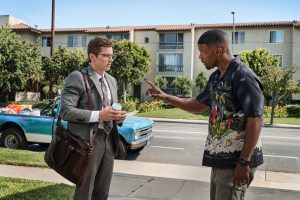 But Seth’s got something else going on that might be helpful: his training. He’s the only one of the vampire hunters – Bud, Big John, and a pair of brothers who love getting physical – who sees an odd pattern emerging in their raids. And it might have something to do with vampire elder Audrey (Karla Souza), who’s buying up a lot of real estate and aspiring to be the big show in town.

Tice and Hatten’s script has an interesting way of world-building. The hierarchies of the vampire castes, the threat Audrey poses as the equivalent of crime boss Jack Travis from Lethal Weapon 3 (the first time we meet Audrey, she’s doing something lifted from this particular movie), the unseen-but-talked-about El Jefe (apparently a bigger deal than Audrey), and even the hunter’s union itself are exciting story elements. Instead, Tice and Hatten’s script is much more focused on familiarizing us with the lay of the land and the relationships within, as if this was the first act of a longer movie. 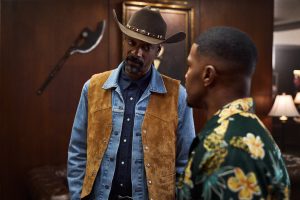 Here lies the problem with Day Shift; it dangles carrots in front of us that the script has no intention of letting us catch. There’s so much to see and do in this world, and Day Shift only gets to about 50% of it before the credits roll. It’s fun to watch, for sure; honestly, this could’ve gone up on the big screen and been a minor hit. But it doesn’t use everything to its advantage, which is where director J.J. Perry’s choices are a little suspect. Why mention El Jefe if we don’t get to see him/her/it? Is the movie just angling to establish itself and test the waters?

Perry makes Day Shift an all-go, no-quit banger of a film with constant action and laughs. It’s constantly moving, never really stopping to let us catch a breath or to transition from one act to the next. This is a fun movie, regardless of its shortcomings as a potential franchise-starter. It’s sunk its fangs into us, but now we have to wait to see if it’ll turn into something bigger or just be a one-and-done. And I’m hoping the sun hasn’t set on this one yet.