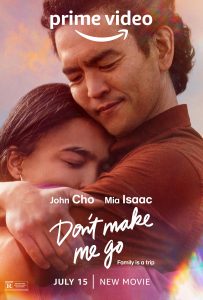 Looking back at Don’t Make Me Go, there’s something about Vera Herbert’s script that brings to mind… well, almost every movie it borrows from. You can point to any scene in this film and find its equivalent in any number of other family dramas or road trip comedies. From the voiceover narration warning us straight away that story might not be what we expect, to the typical “rebellious teenage daughter has to spend time with her overbearing father” plot, to the inversion of the father/son meeting in Alek Keshishian’s With Honors, Don’t Make Me Go is made of standard stuff, opening scene nudity notwithstanding.

And yet, that’s exactly how this film works its magic and strikes the many chords in our souls that it does. The familiar settings, dialogue beats, and action allow room for director Hannah Marks to guide her actors to exquisitely nuanced performances which give Don’t Make Me Go its wonderful heart. While Herbert’s script certainly has its involving moments and a harrowing truth, it contains everything you’d expect from a father/daughter road trip film. The clashing of young and old is always a fun thing to watch, especially when the father’s a buttoned-up kinda guy who doesn’t take his daughter’s shenanigans lightly. 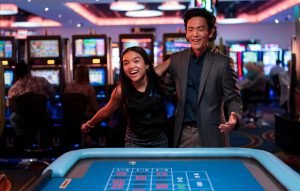 But it’s more than that with Max Park (John Cho), a single dad whose wife left him and their daughter Wally (Mia Isaac) for his best friend Dale (Jemaine Clement) when Wally was a young girl. Now a teenager on the cusp of getting her driver’s license, her father suddenly asks her to join him on a cross-country journey from Los Angeles to New Orleans for his 20-year college reunion. But she’s right in the middle of a possible blooming relationship with soccer player Glenn (Otis Dhanji), a guy so dreamy that she faints when they kiss for the first time. What Max isn’t telling her is that he’s really bringing her to New Orleans to meet her mother Nicole (Jen Van Epps) before he passes away from a tumor at the base of his skull.

From the dynamic-establishing character development scenes that populate the first twenty minutes to the emotional closing sequence, Marks asks her actors to animate and elevate each scene by defining their roles with movement and inference. Mia Isaac adopts the confrontational body language of a teenage girl who thinks her father’s oppressive nature is ruining her life, and she can’t wait to get out from under his thumb. Watching her affect Wally’s disaffected-yet-overly-aware posturing while allowing her walls to come down brick by brick as the trip goes on is art in and of itself. Isaac puts her all into her character, and so does John Cho in one of his best roles and performances yet. Twenty-three years ago, he was the “MILF!” guy in the breakout teen comedy American Pie and went on to create one of the most memorable Asian-American characters ever committed to film, Harold Lee from the Harold & Kumar trilogy. We get the sense that this is a possible growth track for a character like Harold, once a party boy whose attentions have turned to more adult things – jobs, a child he’s raising on his own, and a possible post-divorce romance with FWB Annie (Kaya Scodelario). In addition to, y’know, being terminally ill. Max is trying to keep his best intentions ahead of him while being faced with the worst, and it evinces pensive and thoughtful shading from Cho that, up to this film, hasn’t been seen much (except for those of you who saw the second season of Fox TV’s “The Exorcist”).

These two carry the film, its themes, and its spirit with strength and care. It’s a film which shows how far one will go for the people they love, whether it’s a multi-day car trip or bringing the best out of each other by getting through the worst. The lies we tell ourselves about ourselves or the lies we tell to each other reveal more about what we hold dear than an ugly truth, but the truth must be told somehow; Max and Wally are two people getting through to that truth, even if it hurts. But it’s a truth that must be known, even if it comes at the expense of trust. Surviving all of this might not be the endgame of Don’t Make Me Go, but maybe it’s in survival itself where the film triumphs and makes its point, a sorrowful point eclipsed by the beauty of two lost souls finding their way together.