How do you make formulaic plots and stories attractive and vital? It’s a question director/co-writer Jared Stern and co-writer John Whittington have answered with DC League of Super-Pets, their cinematic spin on the “disparate characters come together to defeat evil” children’s film chestnut. Focusing on a ragged team of pet store rejects who suddenly find themselves imbued with superpowers, Stern and Whittington’s script is packed full of verve, smarts, and heart, even if the core of it is a typical superhero movie. Only instead of a team of people who already know how to do their thing, this team has only one of those kinds of characters – Krypto (Dwayne Johnson), belonging to Superman (John Krasinski for his second superhero movie in the last four months) since he was an infant. The rest have just been accidentally radiated with Orange Kryptonite, which gives superspeed to a turtle, electrical manipulation to a squirrel, enlarging capabilities to a pig, and invincibility to a dog. In a turn of events, it’s up to them to rescue a kidnapped Justice League after Lex Luthor (Marc Maron) gets over on them, and in usual children’s movie fashion, the pets need to get through their own personal and interpersonal issues first.

While Stern and Whittington’s script follows every beat you’d expect from a film like this – a big fall from grace, the insolent guy who won’t listen to the leader, the leader who doesn’t listen to anyone, and the big coming together which results in triumph – it provides so much for Johnson, Kevin Hart, and Kate McKinnon, Vanessa Bayer, Natasha Lyonne, and Diego Luna to do. Alternately working for laughs, emotions, or belief in the impossible, each of them has enough of an opportunity to fill their characters with a genuine love for who they are and what they mean to each other. Johnson gives a Rock-worthy upright and upstanding bravado to Krypto, a dog who’s only known life as Superman’s partner, not knowing anything about being the creature his kind is on Earth. And when he finds out via Ace (Hart) and gets knocked around a bit, Johnson expertly shades Krypto with the pain and wonder of experiencing things for the first time. Likewise, Hart divests of his mile-a-minute patter and uses his trademark punky intonation to contrast his rough exterior and give Ace a lovely, wounded soul.

Both of them, along with the rest of the cast (especially Kate McKinnon as droll guinea pig Lulu), make us forget that we’re listening to popular actors, and they actually lose us in their role as actors… but they gain us as characters, which is much of the magic of DC League of Super-Pets. We’re able to settle in and focus on the story, not worry about whether we’re going to hear the stock idiosyncrasies these actors can be relied upon to deliver. Stern masterfully evokes a high level of trust from the audience by getting more original and nuanced voicings that aren’t meant to stand out, but rather be part of a whole. 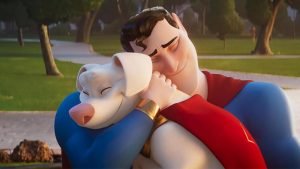 Likewise, the story’s standard plot isn’t meant to stand out; it’s meant to be a springboard for the personalities of each character, which then give rise and meaning to each lesson learned. Stern and Whittington’s script does this in a way that doesn’t feel rote or dismissive, instead giving the film its heart by layering character arcs and a communal sense of finding one’s place with new friends. The typical “C’mon, you can do it!” rah-rah spirit gets played down in favor of more touching moments that cement their growth as individuals and as a team of superheroes.

Honestly, this is one of those films that’ll make you grin long after you’ve walked out of the theater or shut off the 4K Blu-Ray player (physical media FOREVER). Kids and adults will enjoy what DC League of Super-Pets has to offer, with jokes and references to superhero lore and movies that’ll keep fans on their toes. (A kid’s movie with “JUMP ROPE from A Nightmare on Elm Street by Charles Bernstein” listed in the music credits? Believe it.) But more than its action and instant likeability, the audience will appreciate their bond with the film as it invites us to run alongside our four-legged friends while they do what they do best – saving the one who needs them the most.