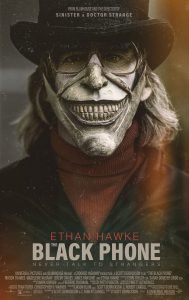 There’s something different about the ethos which drives director/co-writer Scott Derrickson’s adaptation of Joe Hill’s short story, The Black Phone. It’s not here for gratuitous displays of gore, nor is its purpose to be content with merely scaring its audience (although there are some fairly good jump scares hidden throughout). Instead, The Black Phone rides the rail of the lessons of coming-of-age empowerment, albeit with some help from the other side.

Mason Thames solidly anchors the film as Finney Blake, a middle school-aged baseball player abducted by a mask-wearing psycho dubbed “The Grabber” (Ethan Hawke), allegedly responsible for five previous disappearances. Deposited in a soundproofed basement and creepily observed by The Grabber, Finney soon discovers a telepathic link via phone calls from the previous five victims – some of whom he knew personally, some he only knew in passing. But all of them want to get him out of there. 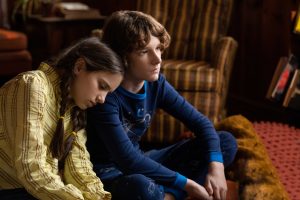 A B-story concerning Mason’s sister Gwen (Madeleine McGraw) and their abusive father, Terrence (Jeremy Davies), is the only diversion from the main plot. Everything is solely focused on Finney’s plight and how his otherworldly phone callers try to help him escape. As the film’s roots lie in a short story, Derrickson and co-writer C. Robert Cargill keep it lean, avoiding unnecessary sidetracks and red herrings by staying with the film’s emotion, not its scares.

Scares, of course, are what one would logically expect from Derrickson and Cargill, the duo responsible for Sinister, the scariest film ever (based upon scientific observation, according to this article). But they dial it back in favor of keeping us right next to Finney as he tries everything – the basement window, tunneling out, even almost falling for the “the killer left the door open” trick – to get to safety. Finney’s battle to stay above his situation and to never let despair get the better of him are most of what keeps this movie speeding along at a pace that never falters, but it thankfully doesn’t have the effect of glossing over or making anything trivial. Like Eric Draven once said: “Believe me, nothing is trivial.” 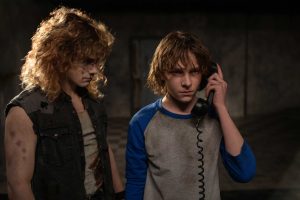 The yang to Finney’s ying takes the form of Gwen and her supposed supernatural gifts, allegedly passed down by her deceased mother (which also could explain the events Finney witnesses in the basement). Madeleine McGraw plays Gwen with appropriate amounts of spunk, brattiness, vulgarity, and spirit, tied inexorably with Mason Thames and his characterization of Finney. Though separated for most of the film, they share a bond that keeps the other going – whether subconsciously or not – and facilitates the crowd-pleasing ending.

On the villain side, there are several personas to The Grabber, all of which Ethan Hawke plays in his own inimitable style. There’s the one who’s in charge and speaks in an effortless, low tone; the one who doesn’t quite know how to deal with what’s going on, but is curious to see how it plays out; and the frantic side who stutters and flails at the uncertainty Finney presents as a victim who isn’t playing by The Grabber’s rules. 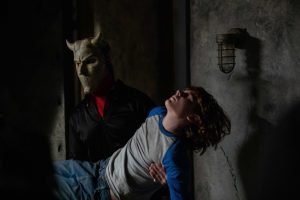 The Tom Savini-designed masks The Grabber wears at any given time also define him, from the rictus grin of the in-control persona to the frowning face of the disapproving, confused persona. Hawke is given another layer of subtext as someone who isn’t comfortable at all with who he is or what he feels compelled to do. He only knows he has to do it, which is all we really know about The Grabber. And that’s all we should know.

Derrickson and Cargill layer in themes of connection, from the brother-sister bond to the phone calls Finney receives on a dead phone in the basement (the titular “black phone”) to The Grabber’s own situation. Finney’s link to one of the deceased victims is almost heartbreaking in its scope and reach, becoming the film’s emotional center through actions that speak louder than the scene of pivotal dialogue they share which grabs us emotionally. And Gwen, keeper of foretelling dreams that could point to Finney’s salvation, alternately makes us laugh and hurt as she endures scorn and abuse from those who refuse to listen to her, yet she never gives up on trying to stay connected to Finney, no matter who ignores her or how hard she’s beaten. 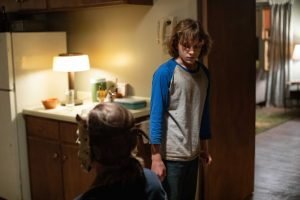 As The Black Phone takes place in the 1970s, cinematographer Brett Jutkiewicz’s dun-colored palette imparts a dated, worn feel to everything, miring us further in the period along with the carefree days of riding bikes through the neighborhood, pinball machines at the local drugstore, and kid-league baseball games that end with respect among opponents. Jutkiewicz also has a magnificent way of making a small basement murder room look like a cavernous expanse, often making Finney minuscule against his surroundings. Frédéric Thoraval’s editing choices highlight Jutkiewicz’s photographic storytelling by opting for wider master shots and long takes, which further showcase Finney’s isolation.

The Black Phone is a masterful adaptation of Joe Hill’s short story, but it also extends itself out to be somewhat of an homage to Joe Hill’s father, Stephen King. While the bulk of the story and film belong to Hill, there are some touches – such as Gwen’s subplot (which is only hinted at in Hill’s story) and the appearances of the dead children leading to a perfect denouement – which come straight out of King’s stories. This combination of father and son isn’t bad at all; in fact, it’s downright satisfying. The Black Phone is a movie that has both feet comfortably planted on opposite sides of the normal/paranormal divide, and it doesn’t feel like it’s stretching to do so.