Posted by Eddie Pasa on June 3, 2022 in Movie Reviews / No Comments 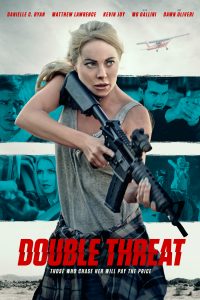 Rare are the movies that try to do so much and scream so loudly, yet wind up saying nothing… and the independent action film Double Threat does just that. It is a demonstration of the inability to hold character development with stability and purpose, to the point where we’re screaming for something – anything – to make some kind of sense for why it exists. More to the point, we’re wishing for any of the movie’s contrived plot to stick and provide some kind of grounding point, but wishing to be clever and witty while dropping the ball ain’t the same as actually being clever and witty.

The film starts off with so much promise – a man walks into a convenience store about to be held up, only to have the pretty woman behind the counter swiftly execute the would-be robbers. She grabs an INCH bag (“I’m Never Coming Home” – this terminology is new to me) and runs out the door… and reveals herself in the man’s back seat when he frenetically drives away muttering to himself. And from there it all falls apart. 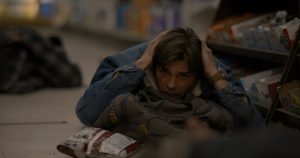 Natasha (Danielle C. Ryan) starts bossing Jimmy (Matthew Lawrence – yup, the kid from Mrs. Doubtfire) around, soon involving him in a car chase that ends with guns firing and dead people. Seems she’s been skimming from a mob organization, and they didn’t like that very much. Buttoned-up accountant Jimmy – on his way to the west coast to scatter his beloved brother’s ashes – wants no part of this, but he’s soon attracted to the adventure and the danger that follows Natasha everywhere. He agrees to let her tag along for the ride with the codicil that she’ll be on a boat and he’ll be safe. (And why even mention that he’s an accountant? The script refers to it constantly as if to lay the groundwork for some kind of denouement that involves his skills, but… yeah, it’s tossed out the window.)

Left alone, this would have been fine. The story would have propelled itself to its natural destination, where the wicked are punished and the good guys ride off into the sunset. But screenwriter CJ Walley suddenly throws in this wrinkle: Natasha is divided into split personalities. Nat is a sweet, unassuming woman who only knows that Tasha’s been up to no good because Nat hurts all over. Tasha, on the other hand, is just as competent as the most lethally-trained assassins-for-hire, dispatching all manner of pursuers with any weapon at hand, whether it’s a gun, a bow and arrow, or her fists and feet. 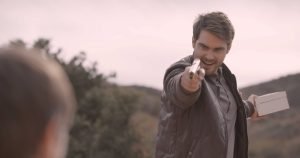 One of these pursuers is mobster heir Ellis (Kevin Joy), who also happens to be Tasha’s fiancé. Deemed incompetent by his own father Tommy (Mo Gallini, one of the best “Hey, it’s that guy!” actors), Ellis has to put up with the likes of Ask (Dawn Olivieri), a mob “fixer” sent to close the loop on this situation for good. But if she were as good as she says she was, this movie would have been over in the first thirty minutes, as she would have delivered the kill shot to Natasha with no hesitation. Instead, she allows Ellis his request to prove his worth by killing Natasha, but to quote a popular YouTube channel, “The power of boners is stronger.”

But back to Nat/Tasha and Jimmy for a bit – when Tasha reveals what triggered her split personality and how Tasha comes out as Nat’s defender, we all know it’s going to come down to how Nat hasn’t felt as much in control of herself as she does when she’s with Jimmy. Which leads to the film’s biggest turn-off: taking away Nat/Tasha’s power and reducing her to a damsel in distress by the last act. The roles reverse from their unique beginnings – Nat/Tasha is an unstoppable force while Jimmy plays the whimpering sidekick – and it’s turned into a cliché-ridden white-knight love story. While Tasha suddenly disappears and leaves only Nat behind with Jimmy, he quickly develops a proficiency with firearms that makes nonsense out of his earlier bumbling attempt to even so much as load a magazine into a Beretta 92. 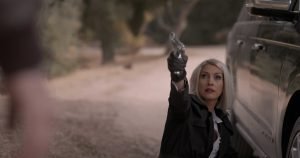 Throughout the film, the screenplay angles for cute and witty moments, but they’re pushed into this space where the film comes off more as trying too hard to be cute than being genuine. And this forced attempt at cleverness starts a chain reaction of the film making no actual sense. LARPers appear out of nowhere to provide action props. A chance meeting between the heavy and the hunted comes and goes without either person recognizing the other, even though they’ve been not more than twenty feet apart from each other at one point beforehand. A standoff results in people laying down arms because someone thinks it’ll be a good object lesson. People strip down to their skivvies and scream into the wind, never minding that there are people around.

Double Threat is a seemingly endless litany of scenes and actions we’ve seen done before and done better. It wants to be subversive and flip the “incognito killer and innocent bystander” routine, but it devolves into a meaningless mess that starts so far from where their characters began, and not in a good character growth kind of way. Sure, the fights are good to look at, especially for the film’s budget, but what gets placed in between amounts to nothing special, nothing memorable… nothing. The film wishes it could run alongside its similarly-plotted brethren, but it can only wheeze and pant as it gets left in the dust.

Not Rated by the MPA (contains violence, language, and a sexual situations – equivalent to R). Running time: 92 minutes. Released by VMI Worldwide and Artist View Entertainment.
Posted in Movie Reviews