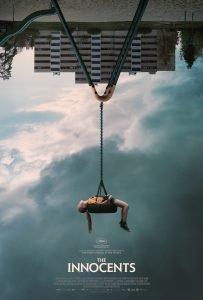 Becoming. It’s what we all must go through in order to find out about ourselves, what we like, what we don’t like, and what we’re capable of doing. Of course, we’re used to seeing it in superhero films and awesome one-offs like Darkman, Fast Color, or Chronicle. But what if it was as low-key as neighborhood children suddenly finding their powers while hanging about and doing normal kid stuff?

That’s the gap The Innocents (original Norwegian title: De uskyldige) fills rather effectively, reveling in the quiet tumult of adolescence. It’s a film about pushing boundaries and how far one can go to either helpful or harmful extremes before getting lost. But it’s all couched in the trappings of childhood, with all of the inquisitiveness and “let’s see how much I can get away with”-ness that every one of us experienced. 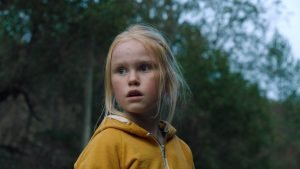 In the early goings, little Ida (Rakel Lenora Fløttum) pinches her older, autistic sister Anna (Alva Brynsmo Ramstad) hard on the leg. A cruel gesture, to be sure; the first half of the film sees Ida pulling all kinds of harmful shenanigans on Anna, mostly to see if she’ll react to any of these painful stimuli. But that’s her childish and immature way of testing Anna’s limits and trying to rouse Anna from her condition. It’s a lot like how we annoyed our older siblings to let them know we’re there and we want to interact with them; only with Anna being on the low-functioning end of the spectrum, there’s no getting her to notice…

Well, at least until they start playing with two of the local neighborhood children, Aisha (Mina Yasmin Bremseth Asheim) and Ben (Sam Ashraf), both of whom seem to have telekinetic powers. Aisha is an empath, able to feel and project what others are feeling; when Ida stupidly puts broken glass in Anna’s shoe, it’s Aisha that reacts in pain, not Anna. Ben’s power is more overt, being able to push falling objects slightly with his mind.

The melting pot has been set and the fire has been lit; all that’s left is for the various ingredients to mix and explode. One might think it’s the neighborhood’s effect on children; while Anna slowly finds her way back to awareness and being verbally communicative, Ida also starts displaying signs of telepathy. There’s a scene that lends credence to the neighborhood itself being ground zero, a locus of kids with growing supernatural abilities; it might also lend credence to the thought of a larger order being kept of which Anna and Ida have become a huge part.

With adult superhero movies, the dividing line between right and wrong is clear, more often than not. (Y’know, when there’s no bad guy saying that they have to destroy humanity in order to save it.) Even the teenage Spider-Man knows where this line is, and he knows what side he stands on. But when it’s kids – who don’t know the difference, having yet to make pivotal, morality-based decisions – how do we choose where we stand? It comes down to emotion and how quickly our fickle hearts can turn against someone or something we suddenly don’t like.

We remember how it was when we were kids – we made friends and enemies as often as the bells rang for us to change classrooms. But The Innocents takes it a step further, bringing these children with these extraordinary gifts into this arena, forced to choose sides because of playtime misunderstandings. It’s not going to be dealt with by tantrums and time-outs; we start seeing actions leading to dire, fatal consequences, which takes this film into an unexpectedly darker place. 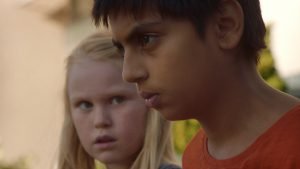 Director/writer Eskil Vogt – whose writing credits include The Worst Person in the World and Oslo, August 31st – has a knack for examining the foundations of human interaction and the bonds which arise and dissipate. This, his first directorial effort since 2014’s Blind, finds him looking at morality through the eyes of nascent humans who just so happen to have superpowers. As children, we poke and prod at the world around us, and Vogt incorporates and amplifies this curiosity with every telekinetic push, every one of Anna’s breakthroughs, and the slow understanding that Ida earns at a very young age.

The child actors are pitch-perfect, especially Alva Brynsmo Ramstad and Mina Yasmin Bremseth Asheim, both playing open and inviting characters, truly espousing the “innocents” of the title. Asheim plays Aisha with a big heart, which turns her into the emotional touchstone of the film. This doesn’t mean that Rakel Lenora Fløttum and Sam Ashraf are given the short shrift; they are the wild cards, the ones whose actions set large swaths of the film in motion. It’s hard to tell where the child actor begins and the performance ends, and this film is a testament to the strength these children have to carry an immensely heavy movie on their shoulders.

It’s a fascinating, lovely, and scary film, wholly unforgettable and capable of keeping you up at night thinking about it. Electrified by quiet and stunning acting, Vogt playing to pensive spaces, and immersing us totally in this little apartment complex metropolis, The Innocents blasts you time and time again with a power that announces itself in quiet and stealth. As kids, we all heard the phrase, “It’s all fun and games until someone gets hurt,” but it’s never quite meant anything as mutedly spectacular as this.

Not Rated by the MPA (contains violence, gore, and some language – equivalent to R). In Norwegian with English subtitles. Running time: 117 minutes. Released by IFC Midnight. Available theatrically and on demand.
Posted in Movie Reviews