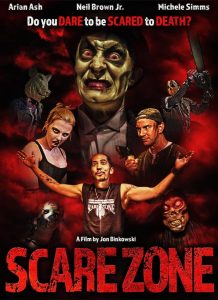 I will never fault an independent film – and I’m not talking about the kinds of “independent” films that have big names and access to big money – for trying to make something fresh and fun. Apparently garnering a limited release in 2009, the do-it-yourself Scare Zone is getting a wider bow this weekend on the Terror Films AVOD channel and a general VOD release a week later, and one can definitely see why it’s taken 13 years to get here.

And disappear it did. But with studios small and large releasing every last property they can get their hands on due to streaming numbers growing thanks to the pandemic, Scare Zone has finally found its time to shine. This little pile of low-budget freakydeaky isn’t too bad a watch, but one can tell it is certainly dated by its language, costumes, and mechanics. 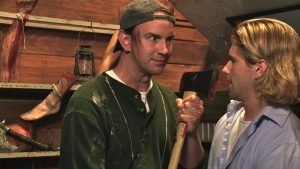 Shot at the Universal Orlando Resort’s theme park haunted maze (sitting unused prior to their Halloween festivities), Binkowski has a ready-made set at his disposal, and he masterfully uses this confined space to wring tension and scares out of every square inch. Mike Gluckman’s camerawork and Oliver Peters’ editing maintain our sense of orientation throughout this house of horrors, which comes in especially handy when viewing their transitions between different rooms.  The tight and lean filmmaking reflects the tight quarters of this setup, which also gives ample opportunity for gore and frights aplenty.

The story is simple: A huckster funhouse owner employs a group of newbies to scare the customers, summarily introducing them to their duties and leaving them just as quickly, but someone’s got the idea that they’re going to turn this haunted house into the real thing. And it’s up to a few plucky kids to figure out why their friends are turning up dead and hacked to pieces.

As far as the plot, dialogue, and onscreen action go, you couldn’t get more throwback if you tried. The red herrings thrown about come straight from the “the weirdo gets set up as the killer” playbook, along with the “shady owner” trope. Dialogue misdirects abound, and they’re chucked in with the offhand-but-meaningful way prevalent in post-Scream horror, that kind of “I heard this about him” thing. Completely unnecessary nudity is shown, and a homophobic pejorative that seemed long forgotten in any film gets used. Moments like these jarred me out of the film’s stream of consciousness, and not knowing when this film was made, I started wondering what Binkowski was up to. 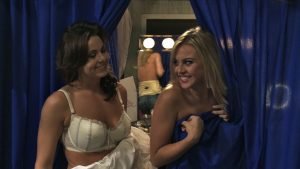 Also, the use of the stereotypical “goth girl” – Claire, played very well by Arian Waring Ash – and her penchant for self-harm stuck out to me. Claire’s written as a girl dealing with deep trauma, turning to shunning those around her and cutting herself as a way to feel alive. This kind of on-the-nose portrayal is more than a red herring; it’s treated as another way to freak the audience out, adding a different kind of horror to the slasher aesthetics on display. While this might’ve flown in 2009, it seems very out of sorts now, almost relegated to the place where “don’t cry, emo kid” memes used to live.

But Binkowski has a penchant for making effective frights amid the so-so characterizations, and that’s where Scare Zone makes its bones. Not every kill is telegraphed, and its single location adds another layer of claustrophobia and suffocation to its atmosphere. The mayhem is rather inventively pulled off, and horror movie aficionados will at least have fun with some of the characters before they get righteously (or sadly) offed in bloody fashion. And keeping it grounded in the horror funhouse setting – with discombobulating twists and turns sometimes throwing you off your track – is an easy enough way to enjoy the kind of vibe Binkowski wants to achieve.

Scare Zone wasn’t meant to be a classic slasher film; it was meant to be a quickly-made movie with a low budget and limited resources. In that, Binkowski succeeds, and Scare Zone is, by and large, passable; when it’s good, it’s good, especially its stalk-and-slash sequences. But when it’s bad… yes, the dialogue and some acting are a little Film 101, but Binkowski has this way of making it feel like it was thrown together with buddies – much like the mini-movies you made with friends on Saturday afternoons on your dad’s camcorder or after school with your high school film club. And sometimes, the “let’s throw everything at the wall and see what sticks” ethic has a way of wallpapering over the worst of it.