Let me get this out of the way: I have no attachments to the previous incarnations of Firestarter – neither Stephen King’s 1980 novel nor the 1984 filmed adaptation – in particular. The book was one of King’s first that I ever read, but I barely remember anything from it; I didn’t see the Drew Barrymore-starring film until much later in life, and I remember more of the film than the book. Or maybe I’m conflating my memories of the two. I don’t know.

But what I do know is that Keith Thomas’ reinterpretation of Firestarter is even less memorable than what I remember of the book and the foregoing film. I watched it early last Thursday, and I’ve been trying to think of positive things to say about it. And when I couldn’t find much, I really started wondering about how I watched movies for review. Did I watch it for the baseline of being entertained, or was I looking too hard for it to please me? 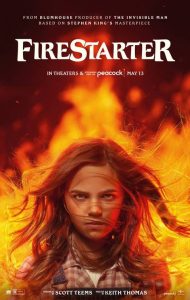 Oddly enough, it was a case of both. Firestarter ’22 (as it shall hereafter be named in this review) is a movie, no doubt – or at least it goes through the motions of being a movie. It has a start and a finish. Between said start and finish, there’s action and a modicum of blood and gore. It tells a story of a man on the run from a covert government program, the members of which are looking for him and a girl. She may be his daughter, but who knows, especially seeing how this movie portrays their relationship. The bad guys are bad, the good guys are good… sort of.

That’s the biggest problem with Firestarter ’22. It strikes this curious ambivalence that keeps the film from actually becoming what it should have been, which is a barn-burner (apologies to those familiar with this story’s previous incarnations) of a David vs. Goliath story. Instead, characterizations are barely registered, the action merely serves a purpose, and nothing really means anything to anyone, neither in the film nor to the audience.

Aside from the “government operation reaps what it sows” angle, there’s nothing solid about this movie. Everything’s in flux, from the way Andy McGee (Zac Efron) treats his family to daughter Charlie’s (Ryan Kiera Armstrong) troubles at school and in life to ruthless bounty hunter/assassin John Rainbird (Michael Greyeyes), sent to exterminate the McGee family, including Andy’s wife Vicky (Sydney Lemmon), seen only to be the softer side of the couple, compared to Andy’s calculating and matter-of-fact manner. 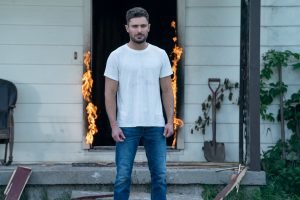 We’re not given any time to sit and be with any of them. Scott Teems’ script and Keith Thomas’ direction never allow for any genuine moments to settle us, to give us any kind of tether to these people they want us behind. They overcomplicate what should have been a straightforward tale of love and sacrifice by paring the characters down to the bare roots and stuffing a parade of obstacles where plot and character development should have been.

It’s evident in the treatment of the father-daughter dyad, whittled down from a loving relationship to the bare minimum of utilitarianism. We don’t see any familial affinity beyond Andy trying to manage their existence, from the way he only seems to be concerned with Charlie’s powers and how they’re getting stronger to getting Sydney and Charlie ready to leave their house to his final act as Charlie’s protector. Points are given for moving the story forward at a quick clip, but it comes at the cost of not bothering to tie anything together emotionally.

Same goes for the heavies of the story, the aforementioned Rainbird and his superior, Captain Jane “Cap” Hollister (Gloria Reuben). No time is given to Cap to expose how truly evil she is; her purpose in this film seems to be to spin the story so that the McGees will bend to her will, coming off as a substance-less government mook. She doesn’t want the fallout from these escaped subjects to be noticed, so she just sends Rainbird after them. And when that doesn’t work the way it’s supposed to, she puts herself in harm’s way to persuade Charlie to do what she wants. 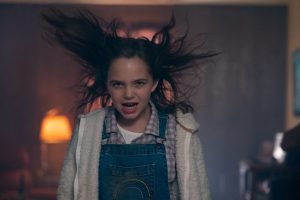 Rainbird. Oh, Rainbird. A conflicted superpowered person himself, he does what he’s told, but does so begrudgingly. He knows he’s subservient to Cap’s demands, but he doesn’t like it. But he kills Vicky and other people seemingly without compunction, only to show regret for his actions later. I remember Rainbird from King’s book, and this version of the character has been altered to the point of absurdity. Rainbird’s supposed to be a stone-cold, manipulative killer; here, he’s reduced to just another cog in the machinery, following his orders but retreating into his conscience afterward.

And therein lies the biggest fault that runs through Firestarter ’22 like… well, the San Andreas Fault. In place of emotional grounding and attachment, we are given an all-too-brief building of a story upon nothing. There’s no foundation, nothing stabilizing how we’re to feel about any character or action. Where some movies succeed on simply being for being’s sake, Firestarter ’22 fails, bearing no spirit or flavor due to how fast the filmmakers want to speed us along to the next set piece or confrontation.