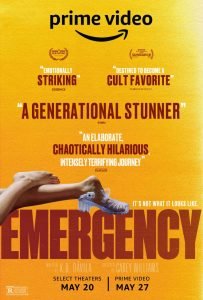 Where Emergency makes its impact is in the way it makes the Black struggle real. Although we see it on the news almost every other day, what we don’t get often is the first-person perspective of just how harrowing it is to be a minority and not be able to trust the systems that are supposed to protect and care for us. KD Dávila’s script comes from a place of experience, not just picking and choosing what the media has already told us.

Two scenes lay this entire film bare: the one that kicks the whole thing off and the one that winds the whole thing down. Between those two scenes, we can see how Black Americans have to negotiate systems that may seem useful to others but carry a death sentence for Black people. Look at it this way: When a white woman is suddenly found passed out drunk on the floor of your house with no explanation, how would you deal with it? Would you call an ambulance? Or would you opt for some other form of action to get her the care she needs? 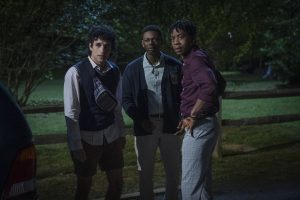 These are the choices that Black Americans constantly have to make with the hope of being understood instead of being given the benefit of the doubt. As an Asian-American, I’ve experienced some of this, but not to the extent Black Americans have. And Emergency explores these circumstances in which assumptions breed the worst outcomes. It’s a startling look at how Black youth are raised to know that they cannot make the right choice for fear of being misunderstood.

Picture the scene: a college campus where the possibilities are endless. But we have white professors flat-out saying the n-word to teach about racism and why the word is so harmful. We live in a world where the worst is assumed by whites and others when a Black person does anything, whether it’s standing on a street corner or playing in a neighborhood park. It’s no secret that guns are drawn and aimed at innocents by the people sent to “serve and protect.” 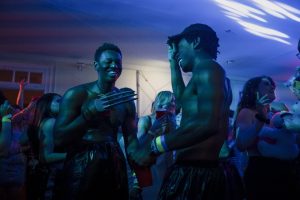 You can see the conundrum presented to Kunle (Donald Elise Watkins) and Sean (RJ Cyler) when they open their front door to find Emma (Maddie Nichols) lying on their floor in a drunken stupor, unresponsive and vomiting. Their choices: call 911 for an ambulance, whereupon they’ll be targeted as potential rapists, or take her to the hospital and drop her off anonymously. Opting for the latter, a wild night kicks off that sees the best and worst of Kunle, Sean, and their roommate Carlos (Sebastian Chacon).

This ain’t Superbad, where the worst trouble that’ll happen is a slap on the wrist, a badly-mistimed hookup,  or the cops taking McLovin out for rebellious shenanigans. This is a world we live in where Black people are shot at by police and civilians alike because they don’t understand, much less care to understand. Director Carey Williams makes sure to let us stew in the agony of the decisions Sean, Kunle, and Carlos have to make in order to get Emma the help she needs and not be pegged as criminals. 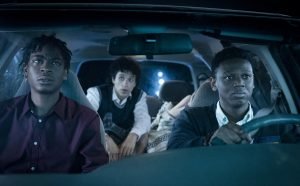 Watkins puts forth a gargantuan performance as Kunle, a student on his way up to making a difference in microbiology. He represents the straight and narrow path, the ideal of hard work yielding great rewards. Kunle is put through the wringer, having to deal with a footloose-and-fancy-free Sean and navigating a path that won’t endanger his future or anyone else’s. As counterpoint to Kunle’s rigid and by-the-book self, Sean is the Kumar to Kunle’s Harold, the guy up for a good time and not wanting any overdue fuss. Cyler plays Sean with a kind of “fuck the world” feel, constantly trying to make Kunle smile with asides and physical comedy, no matter how inappropriate it might be for their given situation.

Meanwhile, Emma’s sister Maddie (Sabrina Carpenter) is looking for her with two of her friends, eventually getting wise to Emma’s phone’s tracking app and pinning brown men for what’s happening to her sister. Without understanding what’s going on or what Kunle and his friends are trying to do, she and her friends tail them and try to rescue Emma from what seems to them to be a kidnapping/rape situation. This, along with multiple jabs taken at white people saying “I’m the least racist person” and putting Black Lives Matter signs on their yards when their behavior points to the complete opposite, are a stark reminder of our hypocrisy and performative, skin-deep action versus the true action needed to combat inequity and bigotry. 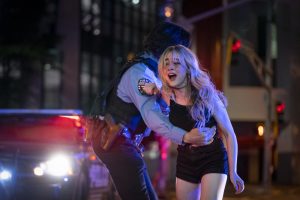 Based on a short film by both Williams and Dávila, Emergency takes us through the most pivotal night of these youths’ lives. It’s a forced growing-up, a realization of where they stand in the world in which they’re supposed to exist and thrive. And one wrong step can cease them from doing either. When the cards are stacked against you, there aren’t many moves you can make. Emergency shows the desperation and consequences of trying to do the right thing, and it also shows the deep divide and mistrust ingrained into us by the repeated acts of those who claim to have our best interests in mind.

MPA Rating: R for pervasive language, drug use and some sexual references. Contains a mid-credits scene. Running time: 105 minutes. Released by Amazon Studios. In theaters May 20 and on Amazon Prime May 27.
Posted in Movie Reviews